They are an above average number of orders placed at the bid/ask price in order to influence the market in a certain direction without the intention of being hit/filled. These orders are often refreshed in order to keep them at the back of the queue so that the person asking/bidding the large size isn't hit.

The following is a Time and Sales printout from at 10:07 EST. I'll tell you what was happening below. 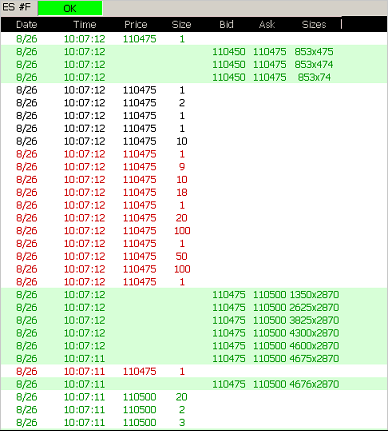 This is what the 1 minute chart looked like at that time: 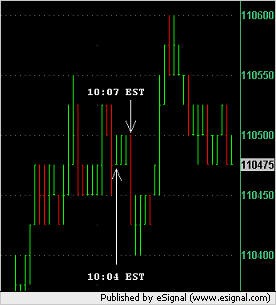 Using tick data I did a forensic analysis of the build up and let down to that bidding. I order to more easily appreciate what happened I've taken out any small increments in bids and ignored the trades that went through in the meantime. Here is a summary table:

This is one version of what might have happened. I refer to the person as Mr Big but he may well have been a she or a collection of traders or a fund. Who knows...

From 10:04:53 to 10:06:10 over the course of 1 minute and 17 seconds the bid side was increased in chunks of 400 contracts a total of 12 times or 4,800 contracts. Here I assume that Mr Big is the person that is increasing the bid size in chunks of 400 contracts. You can see that at 10:06:10 there are 4,555 contracts bid so that means that some of them were pulled or hit during that period. (In culling out the data that I show you above I removed any change in size that didn't result in more or less than 100 contracts changing on the bid side.)

After a 1 minute 2 second pause we have 3,325 contracts being pulled from bid side.

So what happened? Unless Mr Big emails us and tells us, we won't know for sure. There is no reason or incentive for him to do so, in fact just the opposite, he would want to keep his modus operandi a secret so that he can use his methods in the future to take advantage of the market.

So what could Mr Big be doing with all this bidding and then pulling the orders. Here are some possible answers:

I think that the most likely answer is that Mr Big was trying to scare/manipulate the market with this number of orders. The reason that I think this is because the market was trading very thinly on this day (in fact the total range for the day was 4.75 points and the biggest volume we saw in any 1 minute timeframe was around 2,500 contracts) and he was using his size to manipulate a thinly traded market in his direction. He had no intention of getting long 4,800 contracts but was instead trying to scare the market up because he was already long and wanted to get out of his position.

I also feel that (in this particular case) his tactic didn't work as 1,500 contracts traded against him and he eventually pulled the rest of his bids lest he end up with a bigger long size than he wanted or his account could risk.