The end of the big S&P500 futures contract

What is the future of the SP?

The SP is the pit traded future for the S&P500 cash index. SP is the ticker symbol used by the CME. The SP also trades electronically outside of pit hours (09:30 to 16:15 EST). The ES is the the E-mini electronic contract for the S&P500 cash index. It is almost identical to the SP in that it trades during the same hours but is 100% electronic. The SP is 5 times larger than the ES at $250 per point (the ES is $50 per point). The ES also trades in tick increments of 0.25 while the SP trades in increments of 0.1.

Sometime before the ES was launched in October 1997 the SP traded at $500 per point but this was changed to $250 per point before the launch of the ES. January 2006 was the 100th month anniversary of the E-mini S&P 500 future. This article was written in early February 2006.

You are reading this because you are a trader. If you are a trader (even if you aren't) you know what a trend is. Have a look at this chart which shows the volume (number of contracts) traded in each of the SP and ES markets since the ES contract started trading. The volume in the ES has been adjusted by a factor of 5 to make it exactly comparable to the SP. 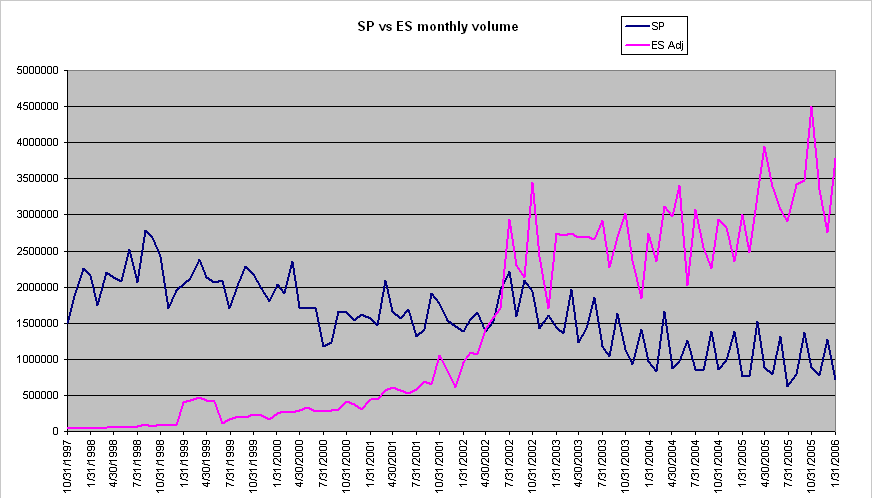 Here is the same chart as above but I've included the total volume of the two contracts together. This shows if the futures contracts based on the S&P500 cash index are attracting more volume from traders or less - irrespective of what is happening to the ES and SP independently. 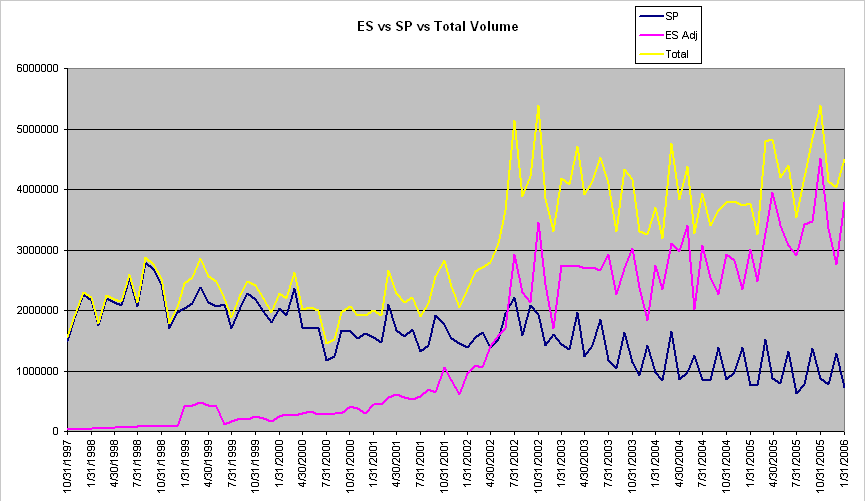 So what does this mean for the SP contract?

Well from what I can see, the volume will eventually hit 0 and no one will be left trading the SP. Lower lows and lower highs - the pattern isn't changing and there is no reason that it should.

What does this mean for you?

If you are currently trading trading the SP then you should think about moving to the ES as soon as possible. Why wait until you are forced into a corner by lack of volume and widening spreads?

The pits served a useful purpose in their day but they are no longer needed and are no longer efficient. Just look at the volume ratio. Approximately 4 or 5 times more volume (by value not contracts) is traded in the ES than in the SP. Way more liquidity in the ES than in the SP. Based on the current market conditions the ES volume would only pick up by 20% if all the SP contracts were traded as ES contracts.

The last statement in the previous paragraph assumes that traders are not arbitraging between the ES and SP. There are obviously traders doing this and so the increase in trading in the ES wouldn't be 20%, it would be a little bit less.

What keeps people trading the SP?

There are a couple of reasons that I can think of (so far - and I'll be adding to this list) that keep traders using the SP (big Spoos contract). They are:

The data and charts used in the production of this article can be accessed from this spreadsheet: ES vs SP volume You can check the calculations that I've done and create more charts here. Feel free to add your modified spreadsheet to the forum and let us know what you've discovered.

On the next page I attempt to predict when the big S&P500 futures pit will stop trading.

When will the SP stop trading?

We continue from the previous page with a predicted date for when the big S&P future will stop trading. 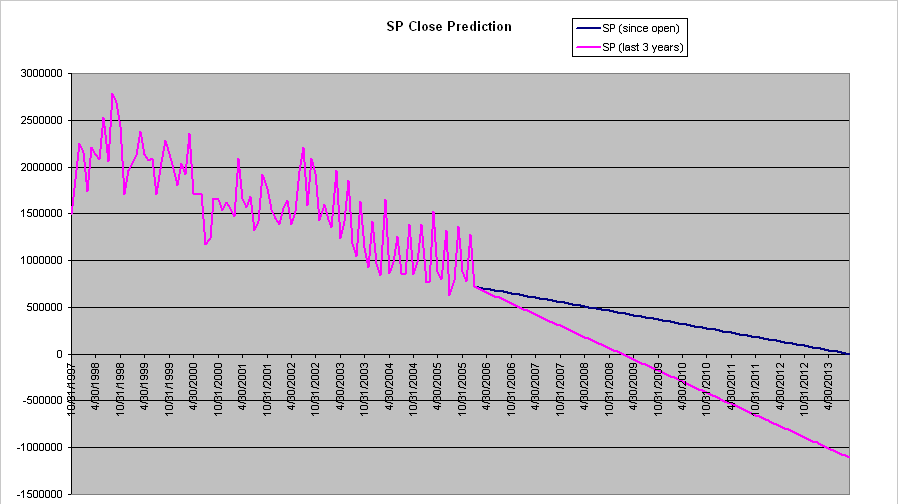 My estimate (thumb suck) is that the SP will cease in 2/3rds of the early time predicted here and so the SP contract will end in January 2008 - if not slightly earlier.

What about changing the SP?

One way of "saving" the SP would be to take the best parts from each of the SP and ES and join them together. This, in my opinion would be the tick size of the SP and the electronic nature of the ES. This would basically mean changing the tick size for the ES to 0.1 or converting the SP to the electronic equivalent of the ES. The SP value per point would have to be converted to $50 (from $250). You can't argue that there's an advantage to being able to trade contracts that are worth $250 per point because all the trader needs to do is increase the number of contracts that they trade to 5 times their original size. The way that the value in contracts traded in the ES supersedes that of the SP invalidates this argument.

The data and charts used in the production of this article can be accessed from this spreadsheet: ES vs SP volume You can check the calculations that I've done and create more charts here. Feel free to add your modified spreadsheet to the forum and let us know what you've discovered.

Next page: When do other traders think the SP will stop trading?

When do other traders think the SP will stop trading?

I setup an opinion poll asking "When will trading in the SP stop?" to allow people to vote on this idea and perhaps we can get a consensus on when everyone thinks the SP will stop trading.

I am amazed to see that over 50% of the traders voted believe that the SP will never stop trading...

The image below shows the opinion poll after several months. I'm amazed to see that 58% of traders have such a long expectation for the life of the (big) S&P500 futures contract. I also think that it's interesting that people have short or long expectancies for the SP but no one yet in the middle. 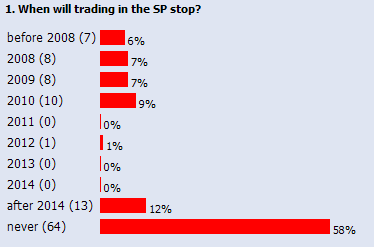 I'll try and keep a monthly tab on the progress of this poll and see if sentiment changes.