William C. Dudley became the 10th president and chief executive officer of the Federal Reserve Bank of New York on January 27, 2009. In that capacity, he serves as the vice chairman and a permanent member of the Federal Open Market Committee (FOMC), the group responsible for formulating the nation’s monetary policy.

Mr. Dudley had been executive vice president of the Markets Group at the New York Fed, where he also managed the System Open Market Account for the FOMC. The Markets Group oversees domestic open market and foreign exchange trading operations and the provisions of account services to foreign central banks. 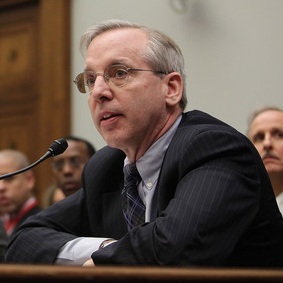 Prior to joining the Bank in 2007, Mr. Dudley was a partner and managing director at Goldman, Sachs & Company and was the firm’s chief U.S. economist for a decade. Earlier in his career at Goldman Sachs, he had a variety of roles including a stint when he was responsible for the firm’s foreign exchange forecasts. Prior to joining Goldman Sachs in 1986, he was a vice president at the former Morgan Guaranty Trust Company. Mr. Dudley was an economist at the Federal Reserve Board from 1981 to 1983.

Mr. Dudley received his doctorate in economics from the University of California, Berkeley in 1982 and a bachelor’s degree from New College of Florida in 1974.

Mr. Dudley serves as chairman of the G-10 Committee on Payment and Settlement Systems of the Bank for International Settlements. He is a member of the board of trustees of the Economic Club of New York.

He was a member of the Technical Consultants Group to the Congressional Budget Office, 1999-2005.