This thread, like my others, feel free to post opposing views opinion etc. I have been harping all month about the danger of the usual Jan peak into a Feb low (see the last few years charts!). And so far it APPEARS to be playing out. But the real question remains... is this the big one? Or is there more rally highs to come? Honestly, good arguments can be made for either view . But if you review my past couple of weekend previews ,you should take away a couple of key points ive tried to lay out. a) A decent decline (lets say way over the 28 handles so far handles is coming. b) It could have already started, but it should have peaked just a little higher so one more thrust up into early Feb is still possible! But we wont keep climbing to say 1350, or 1400 first! c) it wont feel like it, but it will actually be a great mid to long term buying opp.!! d) a strong indication it has started would be traveling below roughly 1266 or so.To support this view i've pointed out the technical divergencies we all see on the daily, and even weekly charts . Just a few more examples: China (a good example of world demand,imho, not only didnt make a new high recently, they are below their 50 and 200 day ma and have declined over 15% since Nov! At the recent 1296.25 peak, the vxowas 14.36 and the last time it hit those numbers was April 2010 and Jan 2010. Go to a daily chart and see what happened next! The same with the widely followed sp bullish percent index (87.4% vs 87.2 in April and 83.2 in Jan!) Lets throw the put -call ratio in there too! These are all measures of extreme complacency. Feb is notorious for being a rough month for the markets ... from sentiment trader:(NOTE HOW MUCH FEB SUCKS AND JUNE TOO, AND HOW GOOD APRIL IS!)...

All of these facts and more(ever since the rally started declines have averaged around 15 handles.. now suddenly we've already got over 25! early high in the week followed by late weakness is negative,etc)have argued for a top right in here. Now on the case for one more little push higher (which right now i'd give a 40-50% odds,pretty much a toss up)Kools tools daily projections are a little higher!(1302.50,1305.50 or 1312!) And you may say ,hey, 1296 is a pretty good call from 1002 or even the 1029 low ,but its been my experience they are usually a little more accurate(say within 2-3 handles ,not 8-10). Also the market likes to screw the most people, and think how uber bullish all would be if we did take out 1296 in the next week or so! Only to take all their money for a late Feb-Mar low! LOL anyway, here is some things to watch for next week and into the first week of Feb...

And the calendar i use ,just as a reference... 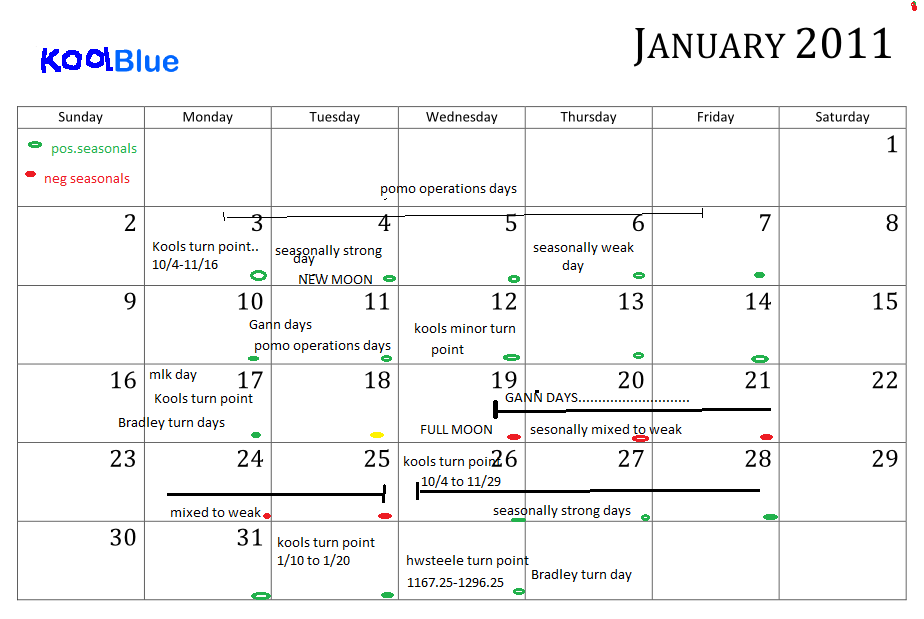 Summary: We have likely started , or very soon will, a very good decline lasting a couple weeks at least. A new high is possible but not a continuation of the awesome rally we stated back in July ,or Sept. It will yield ,however, a terrific buying opp. for later in the year and much higher prices!! ...I could be completely wrong on everything, so remember, this is just one traders opinion! lol...Good trading all!
Oh yeah, one more fun fact. Why do i even pay attention to China? Check this out!....

Your analysis is always in depth and quite amazing actually. I often wonder, since many here hold less than an hour on average I'd expect, does the detail help?

Have you ever analyzed if (or how often) your longer term outlook has biased you into some bad short term trades?

Your analysis is always in depth and quite amazing actually. I often wonder, since many here hold less than an hour on average I'd expect, does the detail help?

Have you ever analyzed if (or how often) your longer term outlook has biased you into some bad short term trades?


Thats and incredibly interesting question! First, the real purpose of my occasional preview posts, is to show how any average joe, and really ,thats all i am, can be as good as any pay service guru if they're willing to put in the time and effort! I really believe that! Anyway, i NEVER used to even be concerned with the 'longer term' picture untill i kept getting requests here at mypivots . The short answer to the question you raise is , im so short term orientated, that no, i try not to let it influence my short term trading ,but of course it does a little. I think it is sometimes useful to enter a day or more especially a week with some kind of pre concieved notion of whether longs or shorts might be 'easier'. My problem is i love trading so much that i constantly have to strive for discipline to wait for trades that are on the right side of those biases! The very nature of my work means i can pick turning points at very small intervals and last week ,i think. was a perfect example! Id have to go back and look, but there was a day i was pretty sure would be a good declining day, but i got bored waiting and entered a long while i was waiting for the expected action. well, the market bounced as i expected, but only 1.5 handles,if memory serves, and even tho my little voice was screaming take your profit! Be careful! My pride wouldnt let me and of course the market revered making me look like a long term genius and a short term idiot! lol . That in a nutshell is why i have oftened remarked, that i am a very good analyst, but an average to poor trader! Its hard because i work full times nights (roughly 6pm to 4- 5am) so i only have a very limited time to trade before i have to get a little sleep! That why i sometimes have to take a trade contrary to what im biased for that given day, or i dont get to trade! And thats why i urge others that i feel my work is valid, but dont necessarily take my trading as an indication of that.Learn the method and use your own disciline and other work to actually trade. For instance, i should be generally selling more than buying into the wed timeframe next week and then agressively buying later in the week, but i have no doubt i'll do both. Lastly, the one thing i do use my longer term views for is positioning my 401 k. Its probably not surprising that i recently went to 100% cash and will likely remain there untill a) the market breaks decisively above say,1312, or b) we decline into a price and timeframe that i have targeted , which currently is well below 1250!
Thanks Kool, man you sure are a busy guy.
Emini Day Trading / Daily Notes / Forecast / Economic Events / Search / Terms and Conditions / Disclaimer / Books / Online Books / Site Map / Contact / Privacy Policy / Links / About / Day Trading Forum / Investment Calculators / Pivot Point Calculator / Market Profile Generator / Fibonacci Calculator / Mailing List / Advertise Here / Articles / Financial Terms / Brokers / Software / Holidays / Stock Split Calendar / Mortgage Calculator / Donate