One of the penalties for refusing to participate in politics is that you end up being governed by your inferiors. Plato

As you may know, Cruz Construction started a division in North Dakota.
They sent every Kenworth (9 trucks) they had here in Alaska to North Dakota and several drivers. They just bought two new Kenworths to add to that fleet, one being
a Tri Drive tractor and a new 65 ton lowboy to go with it. They also bought two new cranes (one crawler & one rubber-tired) for that division. Dave Cruz said they have moved more rigs in the last 6 months in ND than Cruz Construction moved in Alaska in the last 6 years. Williston, ND is like a gold rush town; they moved one of our 40-man camps down there since there are no rooms available.
Unemployment in ND is the lowest in the nation at 3.4 percent, last I checked. See anything in the national news about how the oil industry is fueling North Dakota's economy?

Here's an astonishing read. Important and verifiable information:
About 6 months ago, the writer was watching a news program on oil and one of the Forbes Bros. was the guest. The host said to Forbes, "I am going to ask you a direct question and I would like a direct answer. How much oil does the U.S. have in the ground?"
Forbes did not miss a beat; he said, "More than all the Middle East put together."

The U. S. Geological Service issued a report in April 2008 that only scientists and oil men knew was coming, but man, was it big. It was a revised report (hadn't been updated since 1995) on how much oil was in this area of the western 2/3 of North Dakota, Western South Dakota, and extreme Eastern Montana.
Check THIS out:
The Bakken is the largest domestic oil discovery since Alaska's Prudhoe Bay, and has the potential to eliminate all American dependence on foreign oil. The Energy Information Administration (EIA) estimates it at 503 billion barrels. Even if just 10% of the oil is recoverable (5 billion barrels), at $107 a barrel, we're looking at a resource base worth more than $5.3 trillion.
"When I first briefed legislators on this, you could practically see their jaws hit the floor. They had no idea." says Terry Johnson, the Montana Legislature's financial analyst. "This sizable find is now the highest-producing onshore oil field found in the past 56 years," reports The Pittsburgh Post Gazette.
It's a formation known as the Williston Basin, but is more commonly referred to as the 'Bakken.' It stretches from Northern Montana, through North Dakota and into Canada.
For years, U. S. Oil exploration has been considered a dead end. Even the 'Big Oil' companies gave up searching for major oil wells decades ago. However, a recent technological breakthrough has opened up the Bakken's massive reserves. And we now have access of up to 500 billion barrels. And because this is light, sweet oil, those billions of barrels will cost Americans just $16 PER BARREL. That's enough crude to fully fuel the American economy for 2041 years straight. And if THAT didn't throw you on the floor, then this next one should - because it's (The Pittsburg Post-Gazette article is) from 2006!
U. S. Oil Discovery - Largest Reserve in the World, Stansberry Report Online - 4/20/2006
Hidden 1,000 feet beneath the surface of the Rocky Mountains lies the largest untapped oil reserve in the world. It is more than 2 TRILLION barrels. On August 8, 2005 President Bush mandated its extraction. In six years of high oil prices none has been extracted. With this motherload of oil, why are we still fighting over off-shore drilling?
They reported this stunning news:
We have more oil inside our borders, than all the other proven reserves on earth.
Here are the official estimates:

And it's all right here in the Western United States!!!!!!
HOW can this BE? HOW can we NOT BE extracting this? Because the
environmentalists and others have blocked all efforts to help America become independent of foreign oil! Again, we are letting a small group of people dictate our lives and our economy. WHY?
James Bartis, lead researcher with the study says we've got more oil in this very compact area than the entire Middle East, more than 2 TRILLION barrels untapped. That's more than all the proven oil reserves of crude oil in the world today, reports The Denver Post.
Don't think 'OPEC' will drop its price even with this find? Think again! It's all about the competitive marketplace, it has to. Got your attention yet? Now, while you're thinking about it, this can be verified. Check it out at the link
below.
http://www.usgs.gov/newsroom/article.asp?ID=1911
One of the penalties for refusing to participate in politics is that you end up being governed by your inferiors. Plato
http://www.snopes.com/politics/gasoline/bakken.asp
Just thought I'd weigh in here about something my girlfriend enlightened me about a few years ago. She's been an energy broker for over a decade (and knows her ****). Energy (nat gas not global, oil is etc.) is GLOBAL. The price is dictated by global use. I'd tossed around the idea of something like U.S. self-sufficiency if we were to produce all of our own oil/energy needs.

Her commentary would be (from my own understanding and words) is that if the U.S. cranked out every fossil fuel, it'd still be sold to the highest bidder (for lack of a better word/analogy). In other words, unless government stepped in, the GLOBAL MARKET (not necessarily nat gas in particular) would dictate exports from the U.S. where the highest dollar-per-barrel could be found.

Granted, it'd be nice if the mid-east (and other sources of) energy/oil somehow was shut down as an export to the U.S., we'd be able to sustain ourselves. But, the fossil fuel we produced would simply be a component of the global market, barring that type of extreme interruption of supply.

Initially it did not make sense to me. But after a while I realized that what she said was exactly the way it would unfold. Sure, more "supply" from anywhere will have the tendency to push down price based on demand. While I'm all for drilling the **** out of U.S. ground and ownership interests, it's not a be-all-end-all when it comes to global prices on oil and energy.

ps. Of course, it's all about government intervention, taxes ... both here and abroad, and geo-political issues that can also affect what we'd pay for gas at the pump here.
Politics, tariffs and economics, ... and a gallon of regular gasoline that, on the day Obama was inaugurated cost an average $1.79 in the U.S. soon separted a fool from his money. Today that price is $3.39, an 89% increase. The cost of a barrel of oil hasn't increased 89%.
Staggering hope and change isn't it?

Politics, tariffs and economics, ... and a gallon of regular gasoline that, on the day Obama was inaugurated cost an average $1.79 in the U.S. soon separted a fool from his money. Today that price is $3.39, an 89% increase. The cost of a barrel of oil hasn't increased 89%.
Staggering hope and change isn't it?

IMO, the crude rally of '07-'08 was a warning. We've been fortunate that a slowing global economy (among other factors) has allowed prices to drop back down.

Sometime in the next year or so, crude prices are going resume it's upward trend. And this time, prices won't be coming back down.

Just my two cents.
This might be the real game changer:

http://www.biopetroleo.com/english/
To give some perspective to the commentary on this topic. Crude Oil prices over the last 8 years... 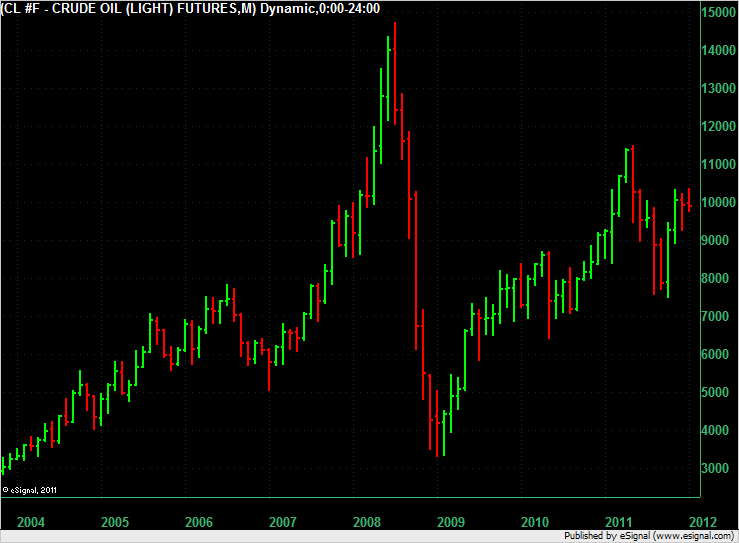