MACD is the acronym for Moving Average Convergence Divergence. This is a trend-following (Lagging Indicator) momentum indicator. The MACD is plotted in a separate pane below the chart because it shows the difference between two moving averages and therefore will have a different price scale to the security or future being plotted.

The MACD is a Technical Indicator (as opposed to an Economic Indicator).

The typical (default) settings used on the MACD are 12, 26, 9, C. This means that the fast moving average (MA) is a 12 period EMA, the slow MA is a 26 period EMA, the signal line uses a 9 period EMA, and the data points are taken off the closing price. 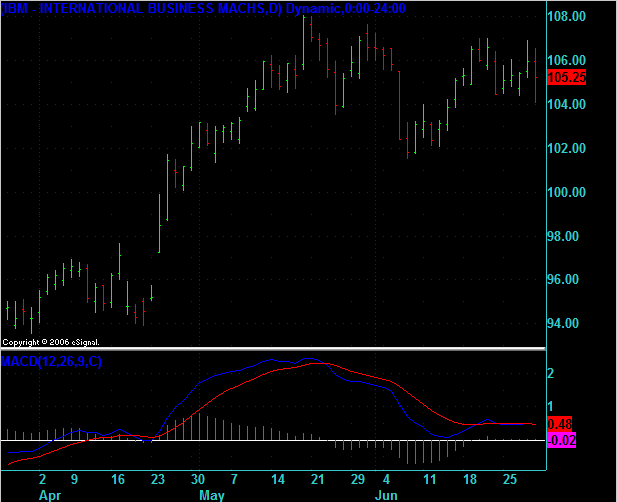 The red line is the 9 EMA of the MACD. A signal is generated when this line crosses the MACD line. The fuchsia histogram that you see on the chart shows the MACD value minus the Signal Line line value. Most traders are only interested in the crossover of this indicator, as such they often switch off the MACD and Signal lines and just watch the histogram's relationship to the center line (white) which is also often referred to as the zero line.

There are three ways in which the MACD is commonly used: