Definition of '2B Dragon'

2B Dragon double bottoms are strong reversal patterns.
They have all of the characteristics associated with other variously named double bottom patterns, such as the "Ugly", the "Adam & Eve" and "Eve & Eve".
What sets the 2B Dragon apart is the near exact bottom prints and the consolidation area that usually forms somewhere after the second bottom is complete.

A specific double bottom pattern characterized by features of the mythical creature.

The Tail
Being that I define a 2B Dragon as a trend reversal pattern, in order to identify and validate it there has to be a trend to reverse ...That is, there must be a "tail" on the upper left hand side of the chart where prices have trended down from, relative to current prices.

The Legs
Next you should see two distinct areas where prices refused to go lower...These lows represent the transitional area between trends - from sets of lower highs & lower lows to sets of HH's & HL's...These become the dragon's front and rear "feet" and they indicate that recent downward P/A is in the process of changing...the feet are either developing a new support level or are re-discovering an earlier support level...(When using very short term charts, the price levels of the front and rear feet should be exact, or within a tick or two of each other)
The Hump
The dragon's back or "hump" prints between the two sets of "legs" and will usually become the first higher high of the new upward trend (provided of course that the legs prove to be support).
The Head
A price consolidation area, or a "head" should develop shortly after the two support legs have formed...
Sans the head, the pattern is 'just' a 2B or double bottom...But with or without the head, it's a pattern that traders should be aware of. 2Bs and Dragons happen frequently on very short or long term time frames and they lead to powerful drives that can be taken advantage of when spotted early. 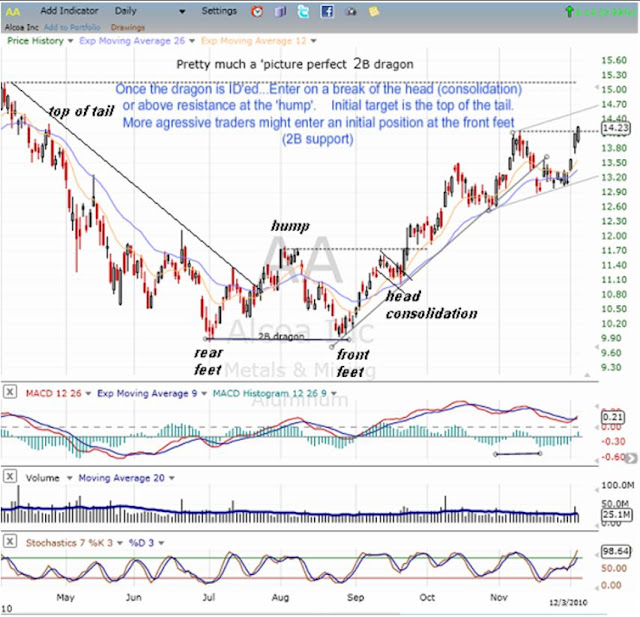