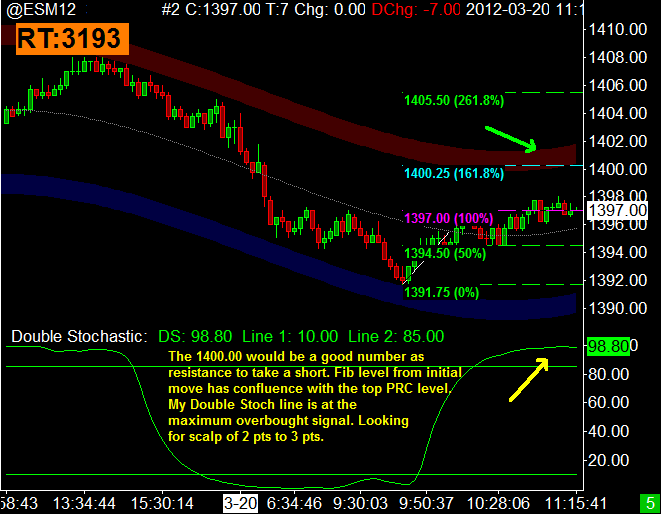 yes, 1400 big round number, but also, in terms of just viewing a chart, at that 1400-1401.25 area go on the right side of chart and move your eye to the the left (on the chart) at that 1400-1`401 level until you see a price bar. there is a breaker bar there (large bar resolutely down in this case that breaks away from the sideways PA) and price often returns to the scene of the crime (the open of the breaker bar). I don't know why. It is like shaking the weak handed shorts?
last week's High (RTH only) was 1400.25, too.
Paul I would consider the bar on the left as air.
Can someone confirm it for me please; is it considered “AIR” from 92-94 on the ES?
OK, you can call it that if you want, I use the term air for any bar that closes outside of the range of the previous bar and the distance in between has not been printed in subsequent bars.

For years, I have called any bar that starts inside a band of consolidation but closes well outside of it a breaker bar, (regardless of whether it is a new H or a new L of the day) and as I explained above, price often returns to test the open of that bar.

I think Bruce does not recognize 'air' in the overnight.

Bruce's air is only created when price moves to a new H or L of the RTH session., so yes, it would be for the overnight session 'air,' but I'm pretty sure he does not specifically use the air concept during the overnight.
the 92 price I see happend at 9:45 AM . symbole @ES
K-

I assume you are talking about during the first 20minutes of the RTH?

I don't think that is air because (on 5min chart) the bar would not only have to move to a new Low on the day, but the bar that follows it would have a H that was less than the low of the bar that preceded the

here is a chart I have of 5 minute bars. I wrote an indicator that identifies Bruce's "air" and paints the bar muddy red if it is down air, and green if it is Up air.

imagine when the bars were formed, they have at least a portion of the range of the bar that will have no overlapping price from the preceding bar. 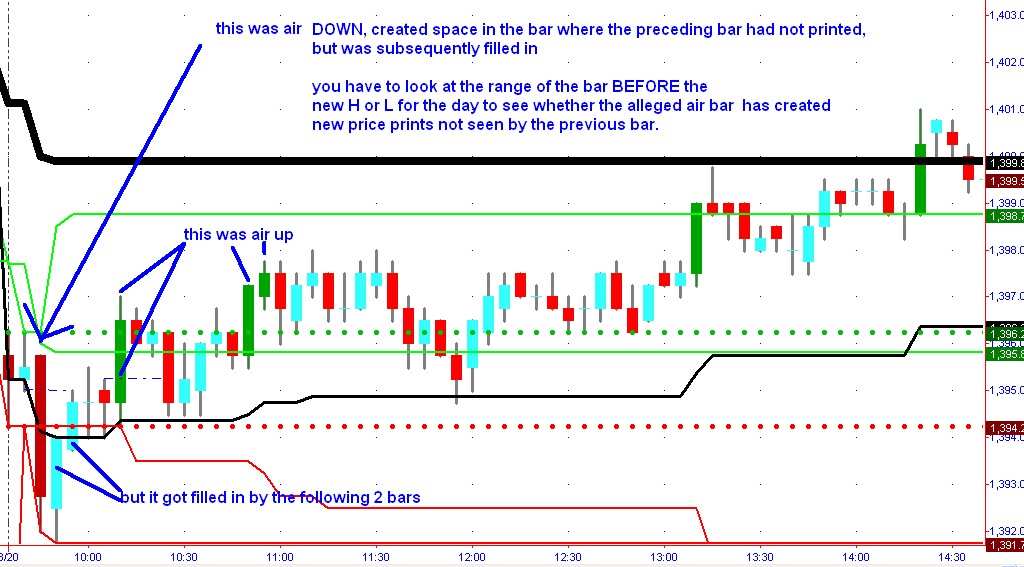 make sure you use the slide at the bottom of that chart to see the beginning of the day.

Ruddy brown ius air formed by down, and the 'air' is the portion of the range of that ruddy brown bar BELOW the Low of the bar that precedes it.

The bright green bars are air UP, for those, you have to look at HIGH of the bar preceding the green bar, that is the air, from that H up.

you can see that all of the airs today have been filled in (except for the very last on which technically would need to see a print of 1399.00 for a fill (extinction)

Today, the market opened below the 60min trend line with the VOLD trending down (ignoring the 1'st min). If you're aggressive, you take that opening pullback to the 95-96 area (middle of bell curve) and short it into that bell curve below with expectations a reversal is likely because its a HV area. Your stop would have been 2-3 pts above and your target is somewhere inside that lower bells curve but no further than 89-90 peak vol.

ADD/VOLD then went against each each other indicating some range bound behavior until it finally chopped around indicating likely a choppy market. In such an environment, there is no bias.. The 1400 short was the only other set up I can see but since I see chop without any re-enforcing bias, it would have been a scalp trade that would have required a wider stop.. ES is really tough these days.. there are lots of ledges underneath so a big home run on the short side is less likely..