OK,
here we are at the edge of the cliff. WHO cares?

Price has been able to stayt above last week's Low of the week.

Who thinks we can see 1403 handle print today?

the overnight box alone has range of roughly 6 pts, add that to the breakout point of 1392, some chartists would think 1398 handle is a sure-in.

sponsored by: The chart of the Perpetual Sinner.
and Alcoholics Synonymous. 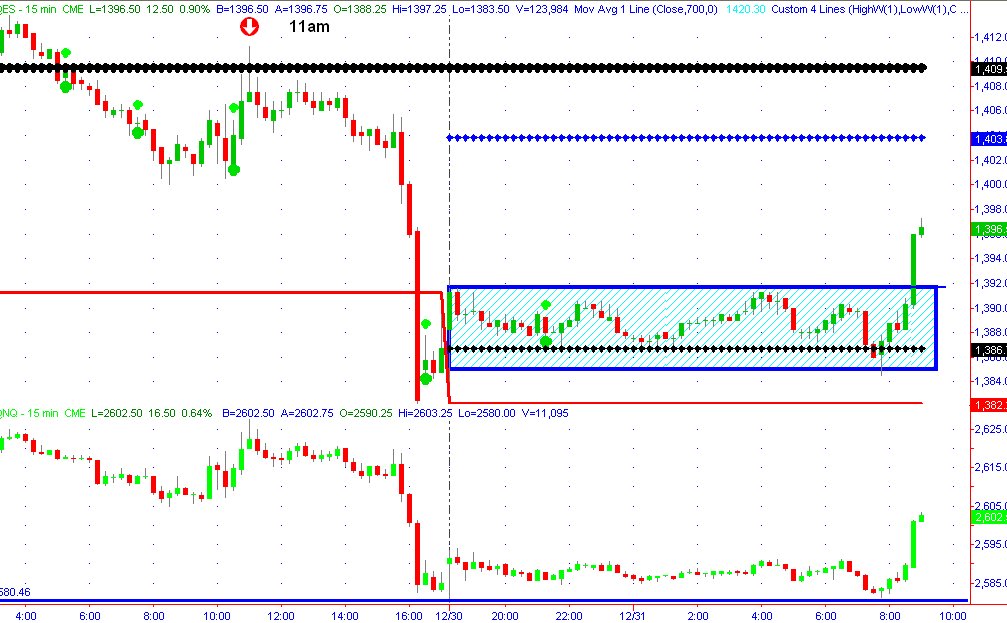 OK,
so the forum has readers but no one is willing to express any opinion, no matter how 'Off the Wall Street" it is.

I saw that forum about memorable trades. Here's a story that is absolutely true.

I had many many deadlines during the day but I always could find a little time to place a few trades. Ones-ees. Just one contract, I was just learning the interface with the software, it was so early in the globex stuff that software on your computer did not post an order at the exchange, it actually had to go to the broker who then interfaced with some other layer. I don't remember the particulars.

I had a couple minutes until my next deadline and I looked at the chart of the ES and said, hell, it's either going to take-off or stall. I'll try a long and bail if it doesn't move in just a couple of minutes.

I put my order in, "Buy 1 at market" and then a little pop-up window would appear on the screen asking me to confirm that this was the order I wanted to place, I hit the 'YES' button and off it went.

I started gong over some data for my next deadline and looked over at the other computer that had my ES chart and trading account on it. Price hadn't even moved 3 ticks in 2 minutes. This is Bull$#!*. I had to get back to my other computer. I put in a sell order and started work on the other computer.

About 4 minutes later the guy in the coral next to mine exclaimed, "Holy $#*T, the market's down 6 points in 2 minutes, what the hell's going on."

I was soooooo happy I had closed out my long position. Oh yes, I said to myself like a seasoned veteran of the pits, sometimes you have to take the small losses...

I turned to my trading computer to see what the 1 minute chart looked like and felt my heart drop to my ankles...There, on the screen, was a little pop-up window asking me to confirm that this 'SELL' was the order I wanted to place. Oh God, I had never hit the confirm button. Well, I hit it then and was informed that my trade had lost 250 dollars.

Talk about the thrill of victory and the agony of defeat. It was so absurd to me that I just started laughing, uncontrollably laughing. What the hell, too strange, I was overwhelmed by the 180 degree swing in emotions.

"It's a riot," I barely managed to say...I had trouble getting the words out because I was laughing so hard.

"What's so funny?" he demanded again.

"Oh, yeah, that's a riot...."
BTW,
in case no one noticed, RTH opening was a retest of the top of the box before the run the 98 (and beyond).
great stuff today Paul..I'm selling against the 1399-1400...my only input and not playing too long today
Bloomberg reporting that Harry Reid saying we're not there yet but he is hoping for fiscal cliff deal today

BTW,
in case no one noticed, RTH opening was a retest of the top of the box before the run the 98 (and beyond).


Good morning Paul.. Good to see you here this morning, it's been a while.

If and when you get a moment. I'm sorry... I've never understood the term "retest" and been too embarrassed to ask in the past.

I see RTH open was 1393.25, but I don't understand the retest of the top box. Other people talk about retest... I sorry I just never been able to figure it out.

Great call on the 1403 number. I have that at R1, I wish I could contribute something more to that, but I actually came in late today.

Thanks for sharing your experience.... Funny... but not really. I get it.

And one last comment... Question?? Where the market currently sits... There is a overnight gap as well a gap from friday... I feel that's significant. ha... hopefully I did contribute something after all. Thanks.

Don't be shy, take a stab at anonymity.

the overnight box alone has range of roughly 6 pts, add that to the breakout point of 1392, some chartists would think 1398 handle is a sure-in.

sponsored by: The chart of the Perpetual Sinner.
and Alcoholics Synonymous.


Also Paul... Thanks for this chart description... I was reading... or watching a video?? yesterday of someone trying to explain this exact strategy... opinion what have you. You explanation makes it VERY clear. Something more to add to my arsenal. Thanks.
It seems whenever an imminent deadline is nearing, no one really knows how markets will react. Sometimes it's just best to sit on your hands.

I'm not sure to what extent they're available to retail investors but knock-in barrier options could be a play here if you like the risk.
This has to be quick, because I've already happily shut the door on trading as of my trades today and I am enjoying a beer.

TQ wrote:
If and when you get a moment. I'm sorry... I've never understood the term "retest" and been too embarrassed to ask in the past.


***
Yeah, well, now that I think about it, I might not have a used a term in a traditional fashion...

Are you questioning my terminology, in saying Re-Tested? Yeah, I guess it might be misleading. But I think of the first move UP, to TEST the "Top of the Box" from BELOW, as a TEST. That top of the box, established at 1392.50, was tested and failed to act as resistance...
Between 8:40 and 8:55 price moved up threw it to print a high of 1397.50. That initial move UP from Below, was a TEST of 1392.50 as resistance. Didn't resist, Price had a breakout. 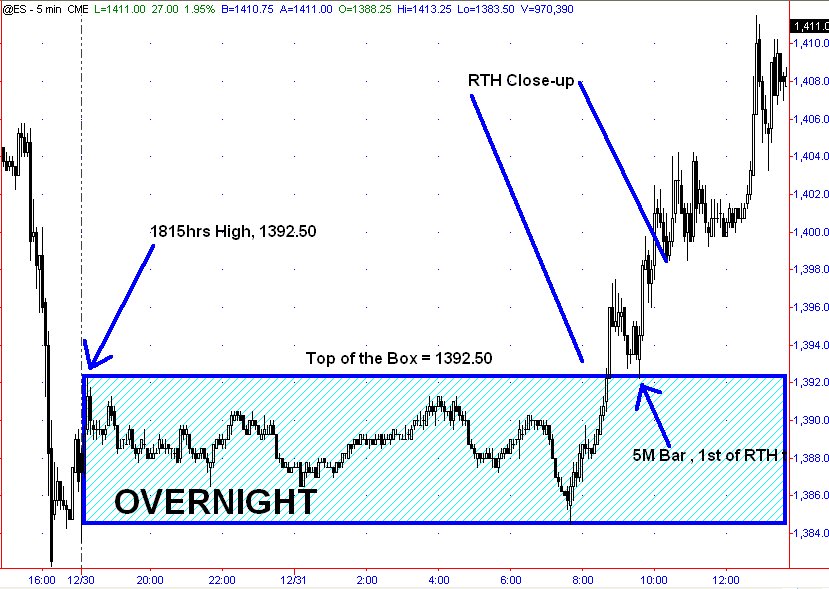 Thanks a Million Paul....

I get it. I read the term before and at one point thought I understood... You just clarified it for me. Many many Thanks..

Happy happy new year everyone.... I'll be walking all the way to my friend and neighbor house. I'll try to be safe.
Here's a close-up showing the first bar of the RTH, believe me, whether you call it a test or a retest, it's worth paying attention to.

Even if you lack the intestinal fortitude to go long at the retest (the best place to try in my book), you could have tried to play the breakout above that 1397.50 B/O High print...It would be a 1-2-3 buy on a 5m scale (have patience with those). Sorry if my term seemed incorrect...

I'm not going to look at any more bar charts for the rest of the year.
And I mean that sincerely.

...There is a different bar that is calling me... 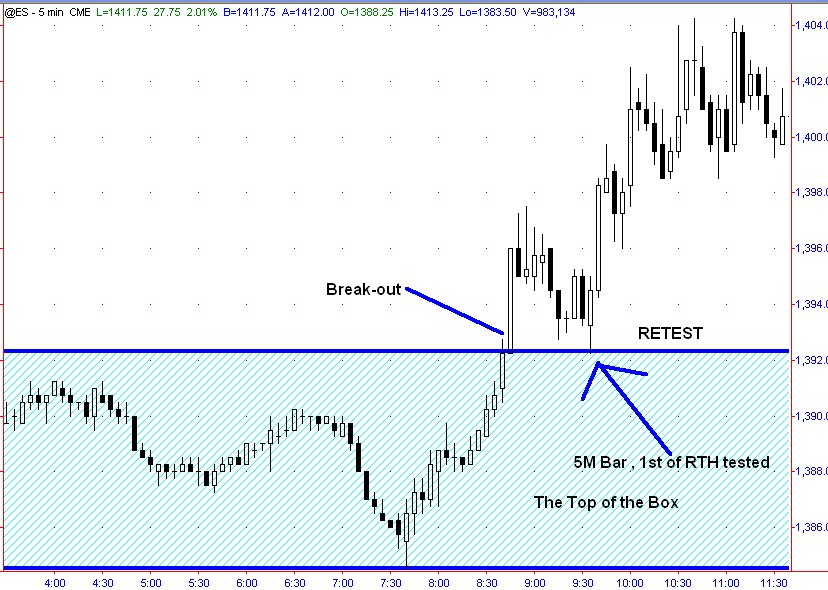