Having internet trouble this morning and am finally back online.
On Monday we tested the low of the 3 day balance, looked outside it quite a bit but closed within the balance area. As of right now, the open would be right at the lower extremity of the balance area so something to monitor there. 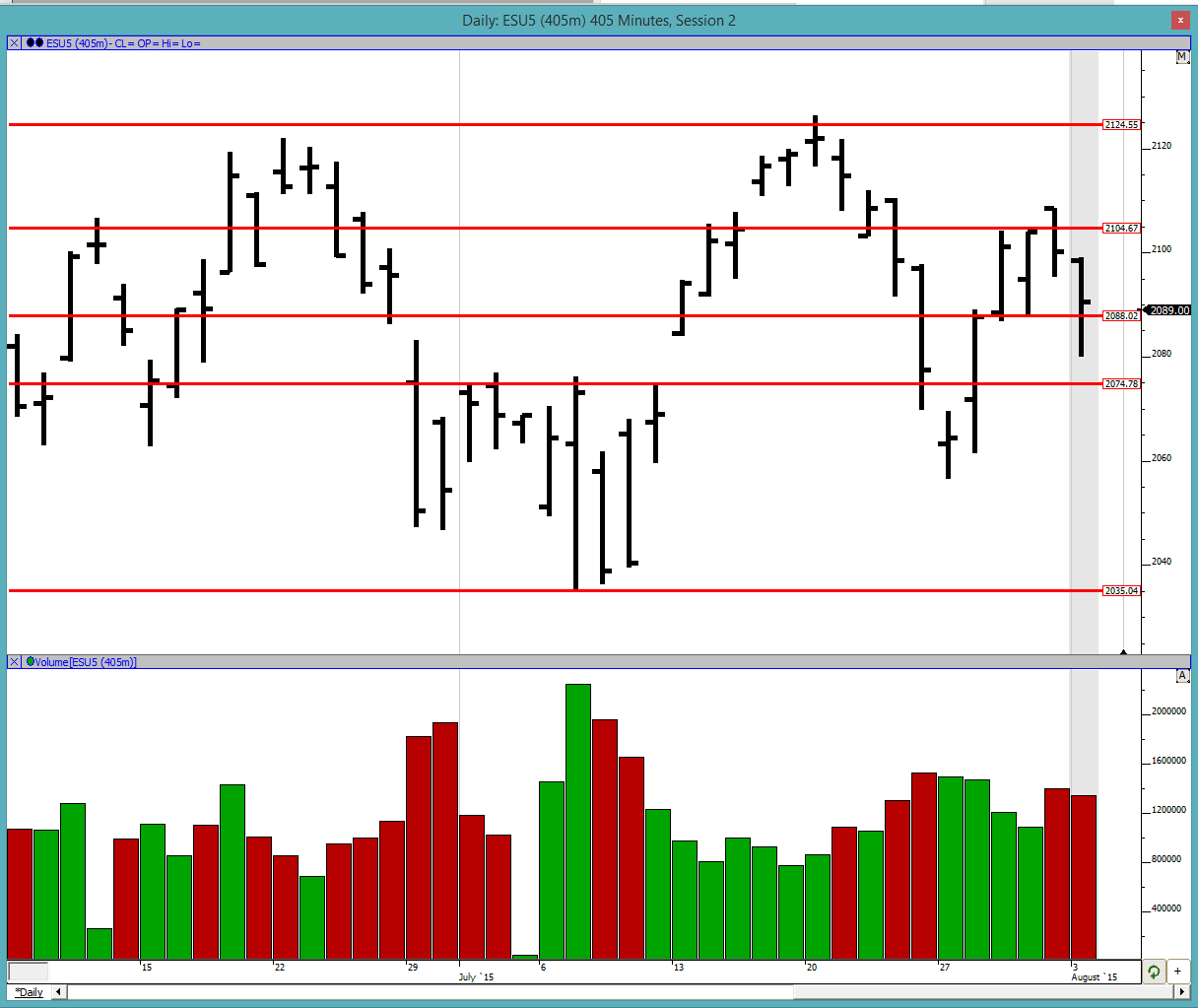 Profile:
We almost had a double distribution day on Monday but the market snapped back up in the M period and closed the distribution. Value was clearly lower compared to Friday so even though the price snapped back up at the end, value remains lower. Also as we can see the VPOC is in the lower part of the distribution whereas the POC is towards the upper end. Keep an eye on the aforementioned balance area to see whether we break out of it or rotate back up to the upper side. The highs and lows on the day were secure with some excess and tapering. 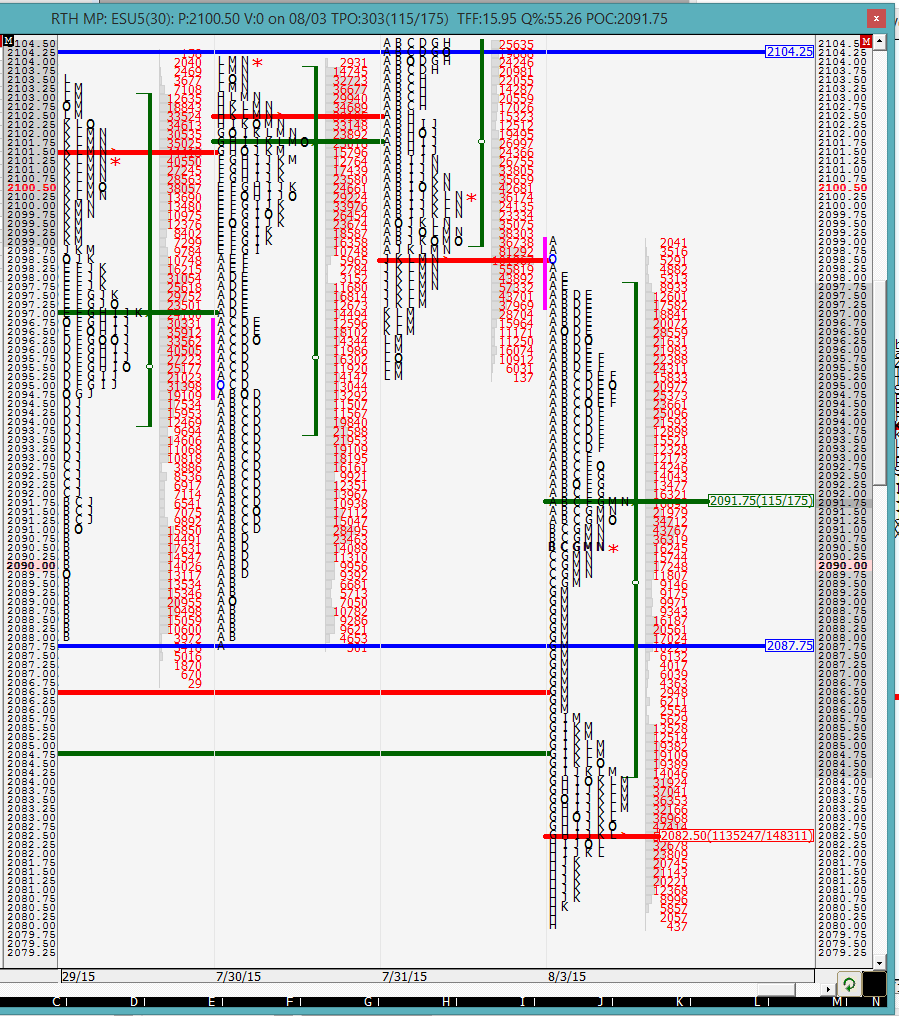 On the split profile we can see how the market snapped back up in the M and N periods closing the dual distribution. The POC at 2091.75 which is also the M period pullback high is likely going to be the line in the sand this morning and the sellers would like to keep the market on the south side of it. If we start spending time above this level then look for the greenies on the upper side to come into play.

jimk had a question YD that I was not able to get back to but I will try answering that here. He was wondering if the G period breakout out of C would have been a good candidate to put a short trade. Keeping the caveat in mind that this is complete hindsight, I would say that would have been a good place to take a short because in C period (and B) we had already tested the 2091 greenie and the market had bounced but was unable to take out the open or even get to the 7/31 close. This meant that the market was weak. If we were to make new lows and break out of C period then the 2087 lower level of the distribution was the only one left and there were very likely a lot of stops underneath it. So when the G period broke out of C lows, it hit the stops that were below C, then the stops below the balance area low and the market moved quickly. When the market moves like it did in the G period, it is very likely a stop run because that is what makes the market move so quickly. If there were a lot of new sellers, the market would have kept going lower, which it did not. So yes, the G period break out of C period was the aggressive play and then the break out of the balance area low in the 2087 area was the more conservative play. 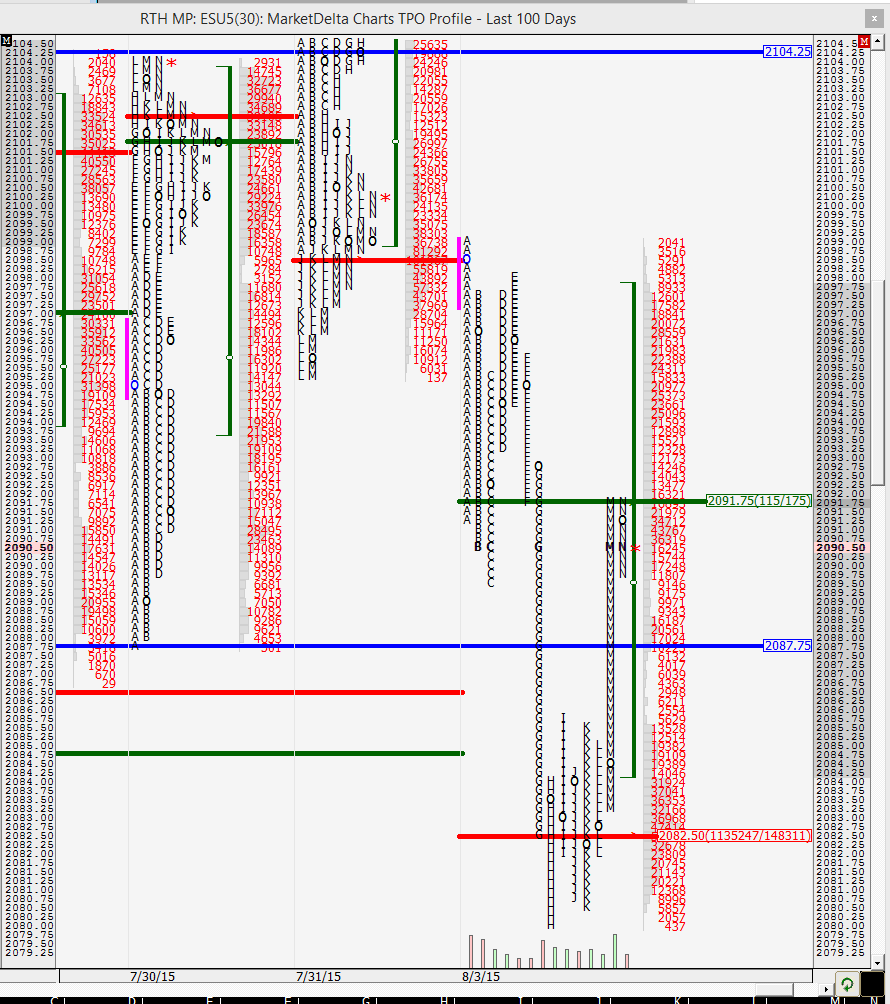 The O/N inventory is balanced with a slight lean towards being short. I will keep an eye on the levels mentioned earlier and monitor for continuation. Good luck to all.
we are now above 2091.75. let us see if the market can hold and build value above this level
the market looks rather indecisive right now with going through the open multiple times
30 min VPOC @ 2092.5
Good morning NewKid & thank you for your response :) It looks like it's having a hard time exceeding the O/N lows.
i never look at this but it could not break out of the O/N value area. next step would be to take out YD highs but there is a greenie on the way at 2096.5. lets see what happens...
Here is a picture showing it. Notice how the A period low could not get out of the O/N value area. I have not looked at O/N value area before but I find this rather interesting. 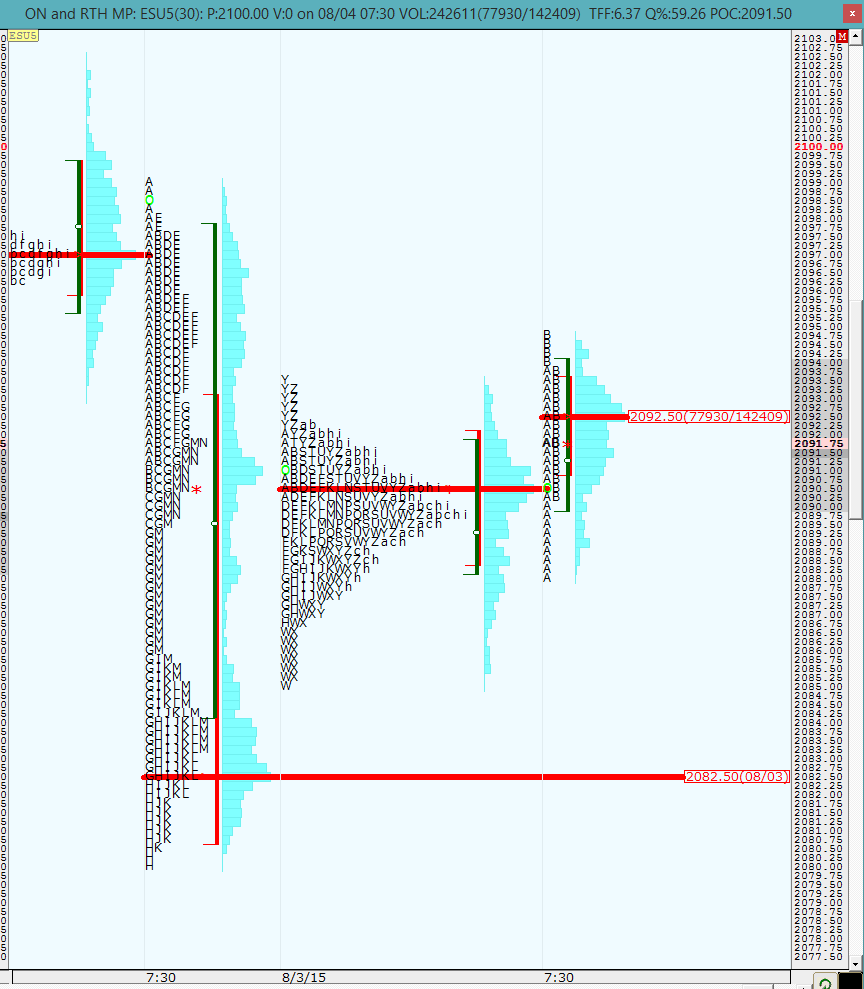