quote:This is the sixth weekly installment of my CL/CES journal I outlined in The Intro. Previous weeks:
Week 1
Week 2
Week 3
Week 4
Week 5

The course is based on material provided by DLC Profiles, as well as Jim's texts on Market Profile, MoM and MiP. Anyone needing more information should fill out this form and schedule some time with DLC to get a deeper overview of the course.

interesting week, both in and around the market. as far as trading, no lie, this was a rough week. not painful, just rough. Tuesday and Wednesday were quite challenging and it seemed like the market was no more adept at finding its rhythm than i was. Thursday was a little smoother, a bit more conducive, and Friday was nice.

EOD Notes
rough, unclear session. barely broke up above the 800 level and when we did, the volume was junk. initial bracket contained the whole day (other than the final, incomplete N-period bracket). poor highs in G- and H-period were revisited, same for H- and I-period lows, and J- and K-period lows. it didn't seem to take much to squash that M-period jaunt up to 800. pretty big volume today too (2.56 vs 1.92 avg). value decisively down from Friday and we closed on the lows. the tone seemed thick with 'waiting for additional information'.

Trading Notes
ugh. not much going on in this department today. i took a long off the weak H-period break of the F-period low. once we had double TPOs down there, it didn't take much 'in the green' for me to bail. in hindsight, the F/G/H-period highs was a nice destination exit, but whatever. i also took a late afternoon short against the C-period high. i finished it with a scratch, but was disappointed with my trade location and my tolerance. it sucks to say both, but had i done better on either this would have been a better trade. so both it is.

EOD Notes
another wide IB contained the day. we opened and drove down pretty hard for the first hour, balancing the overnight inventory and then some. in fact, once it was balanced, we shot the gap, and bounced up a bit, it sold off pretty quick. B-period gave us a tail that lasted until the last (and incomplete) N-period. we had real weak RE up that fizzled right around VAH. the funny thing was, with a little bit of effort and conviction they could have been real damn close to unchanged, if not overlapping higher, value. such was not the case, sellers won, and we ended up with overlapping lower. and, again, we closed below POC, value, and within a couple of points of the lows. looks like 789-792 has developed into a reference area.

Trading Notes
eh. better than ugh, but still eh. i tell ya what though, i felt like a cocky SOB shorting near the A-period high when F-period popped up there. i was quite willing to fade that rally ... of air. i also shorted the L-period pullback into that D/E/F/G/H cluster. since H-period high > G-period high, i was not the same guy from my first trade. i still felt it was on air, but couldn't discount the possibility they would try to 1-tick the H- or even the F-period high. we had three cluster zones and two of those were in the lower portion of the range. it seemed like we were getting lower acceptance. and we did.

Thursday, 02/19/2009
Pre-market
ON inventory got way long, but stayed contained within the previous ON+RTH range. the 797 still seems like a heavy level above, then 800, 805, 808. yesterday value was overlapping lower, and we'll be opening above value but within range. below this probable opening are many technical levels: VAH, POC, VAL, gap fill, recent low, ONL, and PDL.

EOD Notes
the 797 continues to be a prominent reference area. smallish initial balance got tipped over as we trended down. the 787 area sticks out in the profile as 'unnatural'. TPO based VA ended up overlapping lower but vol based was overlapping higher. the opening area caught most of that volume. pretty nice one-timeframing all day, with the G- and H-period pullback to the 788-790 area. dipped below but closed within yesterday's range. oh, and we shot the gap, so the overnight inventory was balanced.

Trading Notes
took shorts today. tried to short the IB on the retest, but D-peiod nixed that idea. barely. in hindsight (always 20/20), my trade location was awful, way too mechanical. the C-period high was nearby, and just above that was the B-period singles. a very non-thinking move on my part. still vibing on that direction though, i tried it again on the way down through the IB again. better conditions and results. next trade i took was shorting that same area in the H-period. negligible heat and relatively quick directional confirmation (for this trade anyway).

Friday, 02/20/2009
Pre-market
these overnight sessions are just ridiculous. today we will open gap down several handles and below all recent lower reference areas. to the upside: PDL, PDC, recent VAL, recent ONL, recent PDL, and recent PDC. THEN we have the other areas ... 797, 800, 805, 808. below us is lower. look for overnight inventory balancing. 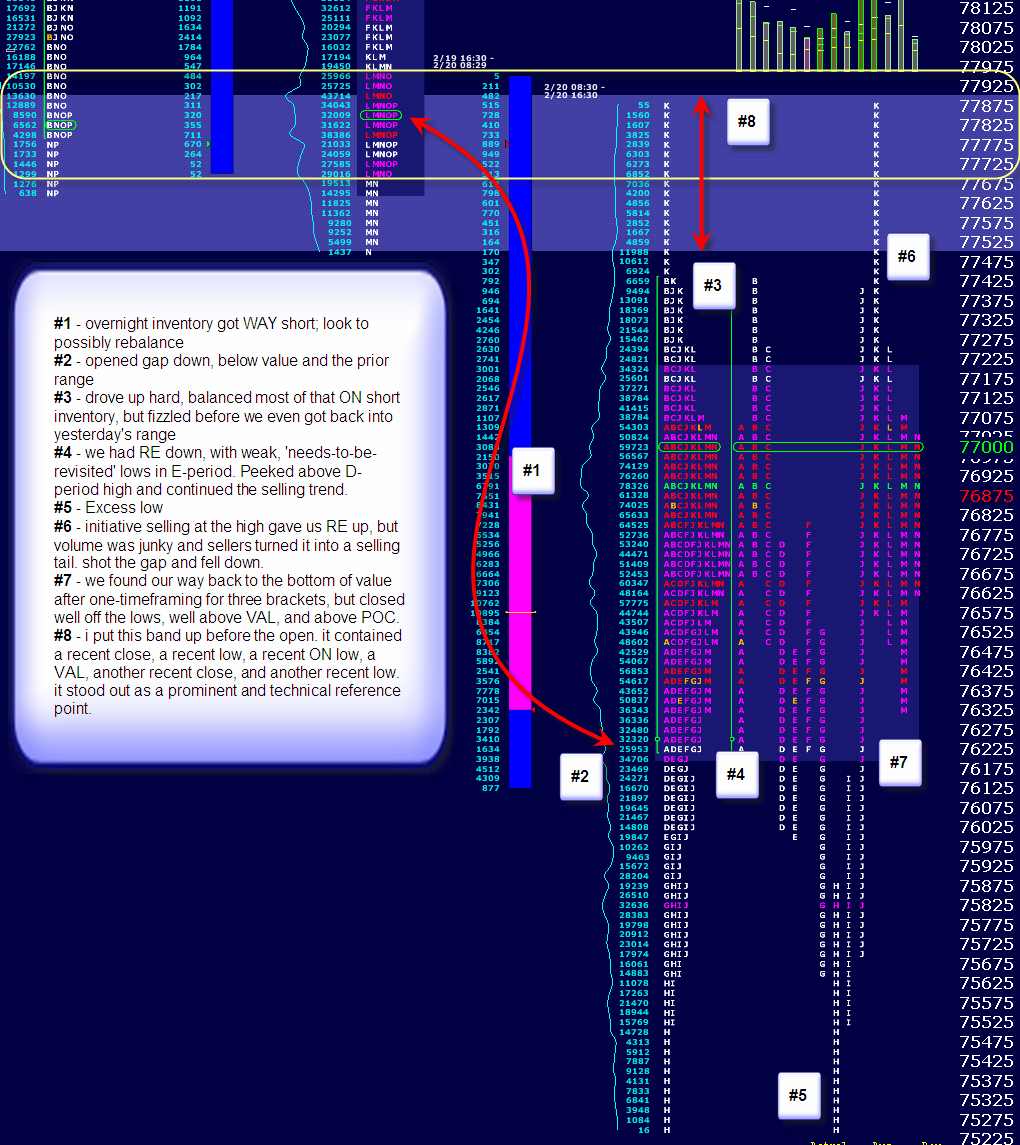 Trading Notes
two trades. one was historical. not for the result (though it was nice), but for the perception. it was the H-period run-down, when we created that tail. after the B-period selling tail, we kept going down and down. then, in H-period we made that harsh downward stab and i vividly recall one overwhelming sensation: excess. it sounded like some sultry British seductress whispering it in my ear. Excesssss. the last sellers had sold. i took the long and watched. Excesssss. i know it sounds corny, but, my God, that felt like the clearest market generated signal i have ever perceived. after i bailed, i barely felt like doing anything more. i didn't want to muck up my moment. i had to step away for a while to get (keep) my head straight. the only other thing i did was a very technical move, which was shorting the gap fill. with such a strong up move off the H-period lows, i really didn't expect much out of this trade. it was getting late, it was a Friday, we now had a neutral day, and this seemed like an asymmetric risk to reward play. i wasn't giving it much room and considered it more a scalp than anything. i felt confident on this one, and not because of my previous trade. i didn't get the same siren whispering sweet excesssss in my ear this time, but we it still happened and we still got a pronounced tail. stick a fork in me, i'm done for today and the week.

jeesh. re-reading my notes and i still spend an inordinate amount of time being price focused. i fully realize this is a process, it just kind of surprised me how prevalent price was in my notes. overly technical. that means i was relegating the market context too often. i see the improvements, but i also see ample room for further development.

time ...
thanks for taking the time with these posts Omni and "keep em coming". They are appreciated!!

Bruce
That's an amazing analysis that you've done omni! Thanks!
thanks guys, i really appreciate the support and encouragement.

it's kind of funny, but when i look back at my market perspective from a month ago, it is barely recognizable. i just feel i have traveled 10,000 miles from that point. the funnier part is with each step i take forward, i feel like another 1,000 steps come into view ahead of me. miles and miles and miles of work await me on this journey ...

i also wanted to add some quick thoughts on some upcoming posts i will be working on:

* First Month Review - less of the market and more of the CL/CES course (i'm actually about a week beyond one month)
* internalized vs. learning
* practice vs. game
* game plan vs. idk
* cross-references - trying to chunk or cluster some stuff and point to a single link within the journal; this could be for concepts, areas, graphics, terminology, and so on

these are all ideas in progress and i have no implementation details other than 'gradually'.

again, much thanks to everyone - readers, commenters, Guy, and the folks at DLC - for helping make this the best journey imaginable.

historically, i have struggled with trend days. and, by 'struggled', i mean i would usually get the crap kicked out of me each time i tried to fade the prevailing trend. and by each time, i mean several times in a session. i just kind of blindly accepted it that trend days were hard for me to trade. but with a bit of introspective investigation, that just doesn't make any sense.

today was a trend day and it got me thinking about my trend day habits. and implications. first, what is a trend day? what does that mean? to me it means direction AND conviction/confidence. it means we probably had a few timeframes converging in this directional move.

second, why is it so hard for me to see it and trade it accordingly? for one thing, it demands a highly developed understanding of the different timeframes. timeframes is where i have the most room for development.

it also requires a 'go-with' mentality. i am more naturally inclined to the confrontational, underdog mindset. in balancing or mechanical markets, this is a priceless asset. however, it will kill me in a trend. so that means trend finding/trading requires mental flexibility. it is no crime to go in with my 'i'm calling your bluff' mentality, but to survive and thrive trend days i will need to develop the mental flexibility to completely shut off my original mindset and switch on the new, trending mindset.

identifying trend days requires broad market perspective. even context has context. it's one thing to view a single session within the context of a day, but viewing that day in the context of a week is a different exercise, and that is a different exercise than viewing the day within a month or the week within YTD. context has context.

for me, trend days also require patience. i have had a tendency to 'find' trades more for something to do than a perceived asymmetric trading opportunity. i've been successfully conditioned to accept the idea that to be productive i should be doing something. a patient, accepting perspective is much more productive on trend days.