Prefer shorts on a higher open today or after 8:30 A.M reports.....Yesterday was another low Volume rally....

Options expiration so I am working under the assumption that they will want to keep it away from 1350 as long as possible..


Many reports at 10 this morning which makes life a bit harder ....
yep, all of them missed really badly...
ES just filled its daily gap (38.75). $BANK still hasn't filled its gap yet and we had that pop first above R1 before coming down here. Not surprising to see the GF level get messy.

VOLD/VOLDQ seem to be holding steady and not giving any indication of direction.
Thanks, LisaP,
I did see your explanation added after close, I read it early this morning.
1336.00 is 600 xma on 5m RTH,

equates to 200 period xma on 15m which a lot of people play,

first test from above usually worth a bounce (if it gets there).

Originally posted by neoikon
If we pop first, I almost think that's more bearish in the long run for today... and could mean revisiting those 1335's.


If only I would listen to myself and not keep buying way too high!
Large orders 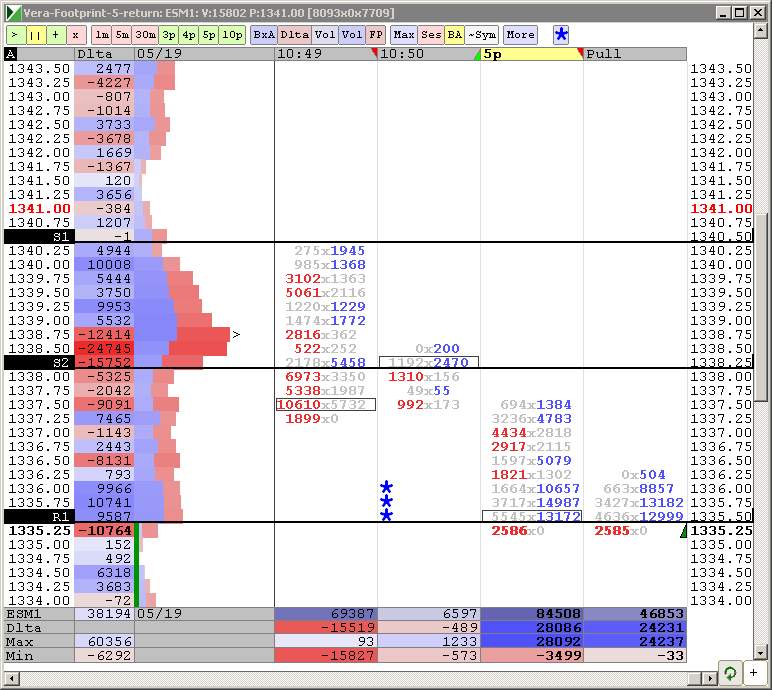 we can do a lot of great analysis with just the ranges of the O/N and RTH session. I'm not putting down fibs or MP or pivots etc....It's just that I think we need to find stuff we can process without causing too much stress....


For today if you were long, you really would have wanted to see trade stay abvove that O/N high...which would have obviously been above yesterdays RTH highs.....

Once we start getting back below the O/N high and the open we have 2 out of three things against going long..yesterdays high was all that was left as an IMMEDIATE reference..then we got below the highs from yesterday....below all three which are critical reference points!
so in general we would have a short bias..This doesn't mean the market can't rally but the simple filters work well..it also doesn't mean you can't fade but for those who are trying to have a directional filter you will find nothing better then those ranges we talk about all the time in here.

Not trying to be a wise guy here...you can see from yesterday the challenge I had when fading above the open, the high of the previous day and the O/N high...I believe that once you get beyond the first 90 minutes of trade then fades in general become a problem. The reason the fades work early on is because the market often tests above/below key areas early on to TRY and attract buyers/sellers...

Now it has been stated that the high or low of a day is put in within the first 90 minutes of the day over 80% of the time...


hopefully some tried a long off the 34.75 area.....once we closed below the low of the 60 minute low we started working on two sets of single prints......a higher probability that we will retest that 60 minute low BECAUSE we don't usually keep two sets of single prints on the same day.....especially inside the range of a previous day..........Does that make sense to anyone or am I just a poor communicator and a freakin whack - job ....?

Doesn't mean it will fill as nothing is perfect....but they will try !!

we can do a lot of great analysis with just the ranges of the O/N and RTH session...


Thanks for taking the time to express all that. Great stuff!
So far everything you've said is very clear today. Nice job on pointing out the 1334.5 support (which I have a PP) first thing this morning. So far so good. Thanks Lorn for the chart to support BruceM's comments.

I will have to re read your last post a couple time, sorry... I'm just slow, but I WILL understand it by the end of the day. Switching between the market and this forum clouds my retention of what is written. Therefore I have to study afterwards. Again.. MANY MANY THANKS!
Correct- Lorn has trips down pat...so still a valid target to consider
Emini Day Trading / Daily Notes / Forecast / Economic Events / Search / Terms and Conditions / Disclaimer / Books / Online Books / Site Map / Contact / Privacy Policy / Links / About / Day Trading Forum / Investment Calculators / Pivot Point Calculator / Market Profile Generator / Fibonacci Calculator / Mailing List / Advertise Here / Articles / Financial Terms / Brokers / Software / Holidays / Stock Split Calendar / Mortgage Calculator / Donate