Given that daily threads will be hard to look back on I thought it might be a good idea to have a general discussion thread on "The Stretch" and how to us it? why it works? and as per a post on the ES thread can it be improved on?

I'll not write an essay however a few thoughts to get things going, it does seem to identify ranges, so either its being traded by the market or it mimics moving averages or some other metric that the market uses? or its simply playing off and framing an average daily range?
It works in other markets, for instance Silver yesterday went to 261 then down to 300 and was very accurate at both points which was amazing given the volatitity and fast move.
I like it because it does 3 things for me, helps me not to get in early thus avoiding that last push that gets your stops, gives good targets to aim for, especially the fact that you have the settlement number, and you have clear stops so one should not suffer big drawdowns, so keeps the emotions in check.
Obviously one needs confirmation of the numbers so its worth having pivot points daily or weekly, Fib retracements off bigger ranges and whatever tool you like to measure momentum etc, MACD for example. plus moving averages and the rest.
Any flaws? it doesnt catch every high and low, yesterday for instance the low of the day on Dow exceeded the number by more then 5 points but given the clear double bottom I took the long anyway and used the +100% to close.
So over to you guys, and hopefully we can increase our understanding of this tool. Keep the daily threads going also and this one more for after hours discussion.
it had been mentioned earlier that that an exhaustion move might equate to x standard deviations so had a quick look and did note that if you put a standard deviation channel on an intraday chart and tweak it to suit the initial moves it did contain the high of the day, also the distance from the midpoint to the channel line was similar to the stretch, might be a one off so will keep an eye on it next week. I can imagine that plenty of bot trading would be reversion to mean trades so there could be an overlap here.


Grednfer, one for you, I'd be interested on hearing more on your idea about updating the math?
Thanks for sharing your success and your research. I'll hook up with a Salmon for you. Until then I am looking forward to reading more about your trades, strategies and research.
Hunter, enjoy, nothing like freshly caught fish!
On the math, I would have to say.....use a stretch# that works.....

I don't trade manually and our stuff is built to run 24hours so humans would not be able to apply....too many rules.

Here is an example of the EU today.....which is in an uptrend.

1. Support at the lower stretch for a long time (1st green dashed)...that would be a buy.
2. Movement through the previous close (pink)...good
3. Initial resistance at the 1.61 level (red2)
4. Back for support at the upper stretch (red1)
5. Blast to the 2.618 (red3) level which is now resistance.....but not necessarily a good short because of the uptrend.

Notice the accuracy......even on a visual model.

Hopefully that helps.....It works on everything. 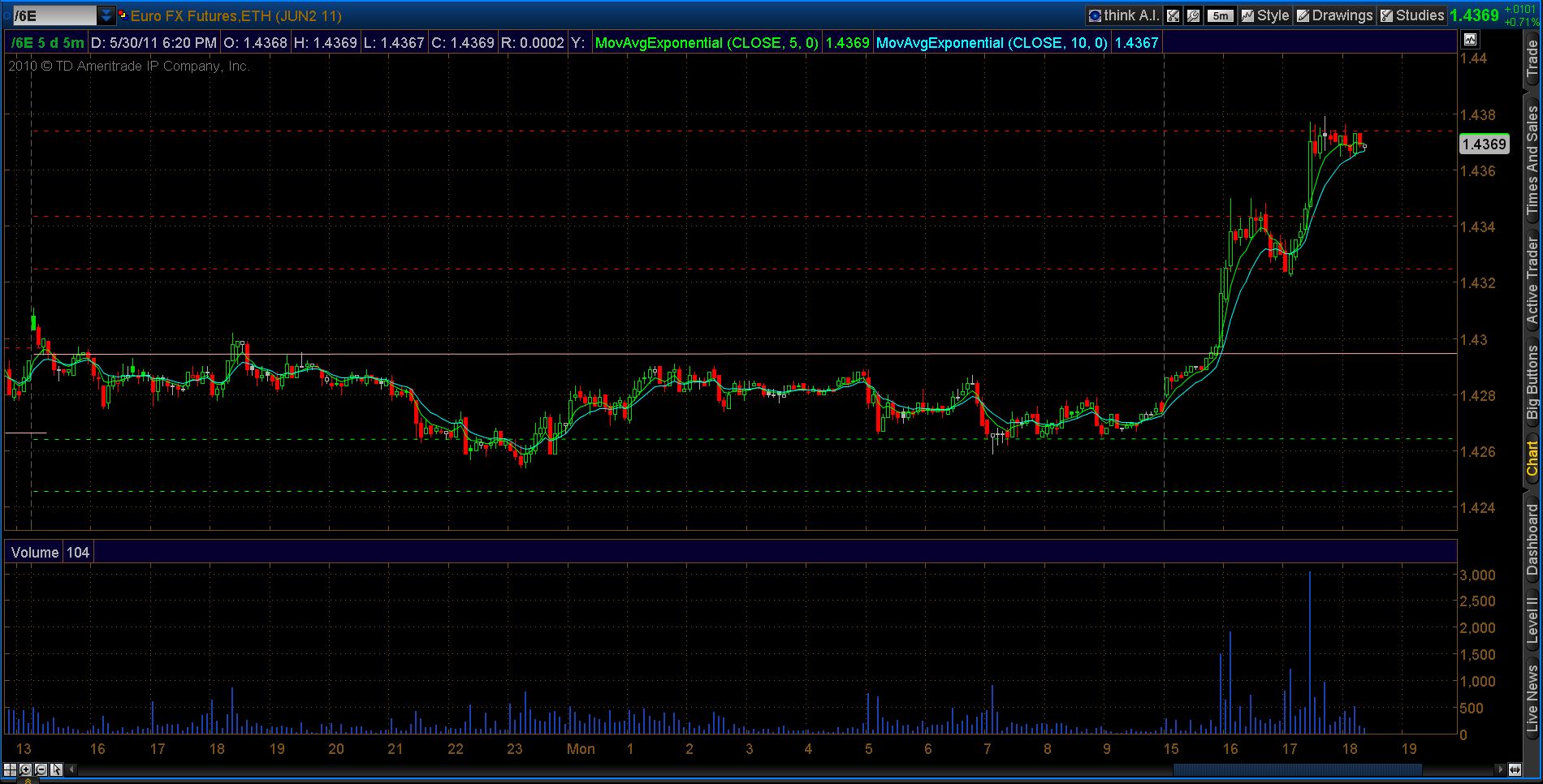