44.75 is the VPOC and POC and a better magnet since it is the center of the bell curve 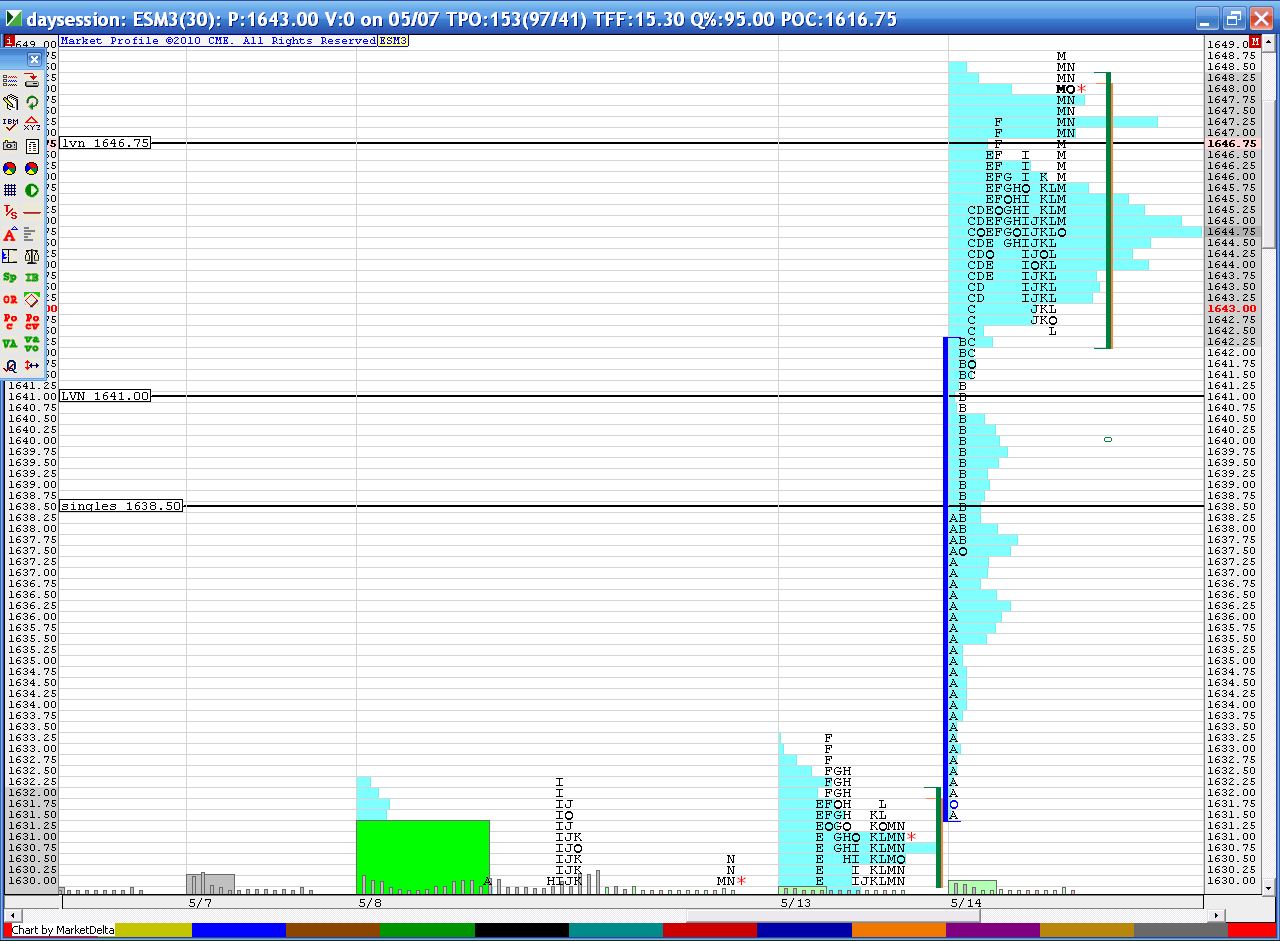 a market that closes on it's highs and opens on it's lows is classic trend day action. They've tested the POC in the On session as I type and if that can hold then we must assume they will run out yesterdays highs and make new Overnight highs

just a thought if anyone is in the game this morning...it will be much safer to have our sells come in AFTER they push out yesterdays highs as the probability is high to exceed that level

due to the bullish market we'd be safer finding long trades. BEFORE that high is run out
I think the pitbull method will work well today..in general to buy breaks and sell the rallies. If the O/N low can hold at that VPOC of yesterday at 44.75 then we have no choice to use that to get long . I will plan to trade lighter on a long there in the day session and heavier on longs into the key zone below at the 41 - 42.50.


If we open in value then my only concern will be if we drive immediately out and above or below a VA level by 4 points or more. Then all fades will be higher risk and will be smaller in size for me.

I have found that it is not uncommon to see them push past a VA number by 2 points or so. This shakes out the small traders. Once they drive 4 points out then it seems that it sparks new buyers or sellers and it isn't just people covering wrong way longs or shorts off the VA's. It seems to attract initiating traders who actually buy ABOVE value and SELL below value
If we get long in the better zone then it would be wise to use the VPOC/POC of 44.75 as a first target , then the 46.50 and then new highs if real lucky.

Watch all swings that are greater than 4 points off a swing low or a high...that is the upper extreme before profit taking sets in on many swings

hopefully they will give us some room for profit by opening and pushing into our zone...aggressive traders may take small stabs here in the O/N session and use that 44.75 as a first target AREA
looks like buyers are dipping their toes at the 43 price..frontrunning our zone
I hope most can see why my line at 46.75 was a more importnat line..

think bell curve and that volume that came in above that was only the 4pm closing volume....withoutthat we would have had perfect symetric volume up there and the Volume VA would have stopped at 46.75 instead of at the highs of yesterday


the easy part of this trade was that the market opened and rallied up to the plus 2.5 and right into our zone for the pitbull shorts...


the hard part comes when we KNOW yesterdays highs and the close is a high probability target for those holding longs...for this reason I was light on shorts and came out fully at the open retest...keeping in mind where 2.5 - 4 points is off the swing high and that 44.75 as the magnet

overall it wasn't an easy trade to take...but often the good ones aren't..

I won't take the second try off that upper zone if it comes..I think if the 44.75 holds the retest downhere that they will go for those highs and the close..


they are working on the "M" poattern off the 5 minute...so third leg should be up now
reports coming
I'd like to see them push out those highs and O/N highs into a plus 4- 5.5 zone before thinking about shorts again
just got back in...4 sets of triples in the market...strong....we are at our upper zone now !! the 58 - 60 !! Gotta pause at some point
no bracket test of a previous low yet either
expecting a test of 55.50 but just not sure we caught the high yet...lets see what happens when we break a bracket low
that was beautiful..two out of 4 single filled in...we need 54 - 55.50 to hold any rally attempt now
Emini Day Trading / Daily Notes / Forecast / Economic Events / Search / Terms and Conditions / Disclaimer / Books / Online Books / Site Map / Contact / Privacy Policy / Links / About / Day Trading Forum / Investment Calculators / Pivot Point Calculator / Market Profile Generator / Fibonacci Calculator / Mailing List / Advertise Here / Articles / Financial Terms / Brokers / Software / Holidays / Stock Split Calendar / Mortgage Calculator / Donate