above is 1707.50 and 1710
Bruce would you address the fact that there are so many holes of low volume spots below
this is what i have for today...pretty much in line with bruce's.....the dashed lines are there but i am not giving them too much importance as they come pretty close to other lines 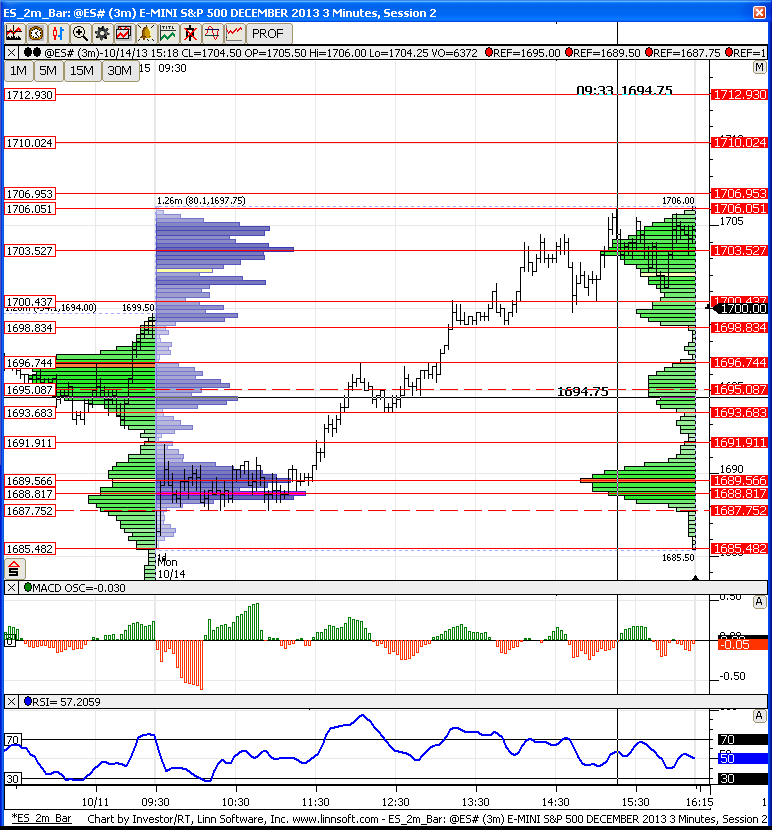 on 97.50 long....ultimately will try for Overnight midpoint but need this to get over 1700.75 otherwise this will take heat
took something at 99.50 and just got stopped....will look once more if we make new lows
im covering here a long from 1695.75... will buy any move to 1692...out at 1699.00
better entry on the dip into the 96.50.....trying to hold something for 1703....once again this 1699- 1700.50 area is critical
very unusual trade the past few days.....the big surprise for me was how often they missed hitting the overnight midpoint...once again we need to come out heavier when we get back into a key zone after hitting a zone lower
that dashed line i had on my chart at 95 was the center of the middle distribution from yest....given the tight area for that curve i thought it was not gonna be such a factor if we dipped inside that area (i.e 93.75 was expected to be the supp once in there imo) but was evidently wrong...longs could still be caught up after we bounced off that line...yest rth mid area was also there providing support

we are now trying to wrestle with the bottom of the top curve from yest...so watch that to see if we can make it back to the middle (3.5) which matched the o/n mid point bruce is looking for to get tested eventually...

scales in this lowere edge area are recommended imo
lol...i was typing this same thing almost at the same time as u were...nice to be on the same page !

I'm looking for someone with tic data to verify a zone I'm babbling about on this video......and I fess up to a mistake I made which cost me an opportunity today

No video below? Try this link: tuesday_part_two.swf