Here is a strategy which I did not originate. Perhaps some of you have seen or heard about various forms of this. It was taught to me by a self proclaimed “old Timer” who I happened to meet about 5-7 years ago in a commodity site chat room. This was before Paltalk and Hotcomm was popular. I present it here mostly as it was taught to me for free. I “watched” him trade this for about 9 months in real time. It was designed for the big S&P contract so I have modified it slightly for the emini. The man who taught this was gruff, sometimes abusive ( especially when the future vendor Kingfish came in the room) but always answered questions…

Originally I thought he was going to turn out like the Army Sargent played by Lou Gosset Jr. in “Officer and a gentleman” but this mentor just disappeared and I never found him again. Perhaps he started his own service and markets this but I haven’t seen it. His idea on stops was the following….”You can either take the loss and try again or trade your way out”. He always tried to trade his way out and would sometimes lose on trend days… as it is a counter – trend strategy……a few other things….he would call in for the official opening range…( it is not the one minute high or low as some think but we can use that for exits)..I am using the opening price on the emini to set the levels . He would trade up to 50 contracts if he needed to so he was at times adding to a “losing trade” as some might say……he always took a 1.5 point profit target…….he didn’t alter this….I’ll think of other things as we go. He also thought that if the rumors where true and the floor traders where moving to screen trading then this strategy would become less effective…….it is only traded in the first hour and he only broke this rule if he was trying to “trade out”…..keep in mind this was designed when volatility was higher and 5 minute bar could have a range of 5 points…unlike today's markets……I think the levels are most important and although I don’t snap them on my own personal charts I have them written down on paper after the opening….He believed that at 10:30 EST you should close your business up and end for the day…unless he was trying to recover... ok enough of the history

ok first we take the opening price and add and subtract the following numbers
The strategy tends to capitalize on the floors ability to push the market in one direction to sucker in the public for it to then only snap back towards the opening range…I have noticed that it works best when the market is pushed to an extreme of either an overnight high or low or the previous days high or low…so we can relate this to an “open-test-reject” as per Market profile concepts……
+- 2.5
+- 4.0
+-5.5
+-8.0
This sets up our WINDOW of trade entry points….For today Friday January 5th I have the opening price at 1424 so the downside numbers would be 1421.50, 1420, 1418.50 and 1416..and here are the rules.


You would stop trading if the markets dropped 2.5 points below the opening and then traded 2.5 above the opening…..this would be called a COMPLETED WINDOW RUN and the floor was done doing it’s business…you would be finished also…just one or two good trades a day……for now think about how you can incorporate the Pitbull One and II thread ideas into this……did you see the singles band with the first and second one minute bar today

The Market opens at 1424 and drops down to slightly below the minus 2.5 number at 1421.50…since we didn’t trade back to the opening at 1424 there is no long trade…..The market then drops further and goes to the minus 4 number at 1420 so we are a buyer at 1421.50……which is the minus 2.5…If you use stops then this trade would not have hit 1.5 points of profit and you lose if you are using stops….The market drops further to the minus 5.5 number to the tick at 1418.50..so you are a buyer at the minus 4 which is 1420….this achieves it’s target and rallies up to test the band..see pitbull thread II at the first and second one minute bars…not shown on this chart. ok...this is a lot so I will work on trying to clarify what needs to be clear…the second long was better because we had Tick divergence to support the trade…may seem complicated but it’s not..I’ll highlight the important stuff…..and ask questions...it helps me too to get this stuff in words

Bruce
If we take the -4 as an example. -4 off the open is touched we put a stop limit order to go long at -2.5 off the open with a limit sell order at -1.0 off the open. Those concepts I understand.

Now you say that he doesn't use stops but in reality he does because he closes out before the end of the day. So if you are now long from -4 and the market drops to -5.5 you add to your position right? If so, where is/are your target(s)?
The mentor I learned this from busted out all his trades at the minus 8 if he was short and wrong....he would literally just exited the room and wouldn't come back.....a big part for him was proper position sizing on his add ons but I would assume on days he was wrong he took a big loss...the thing is he didn't lose on many days........the minus 8 hit and minus 5.5 stop to go long is my addition to his entires.. he didn't use this as an entry... I have adjusted it for this volatility...he did stress to us that he felt it was better for low capitalized traders or high stress individuals to just exit at the first loss and don't attempt add - ons until you got real good and comfortable with the method...thanks for that question Day...I have other things I need to add and will get to it when I can.

Originally posted by day trading
So if you are now long from -4 and the market drops to -5.5 you add to your position right? If so, where is/are your target(s)?

In this scenario he would add more size and use the minus 4 as the target still....so you are covering your initial trade that went against you but profiting on the additional contracts you put on...hope that helps...Martingale style....but he was good...

Bruce
If you are just monitoring "levels" instead of trading this method I believe the plus and minus 4 and 8 are the most important numbers but I persoanlly don't use them to trade from after 11 EST...but they can support a trade location sometimes...here is how today turned out with the plus 4 and 8 lines on the chart..not perfect but interesting just the same.... 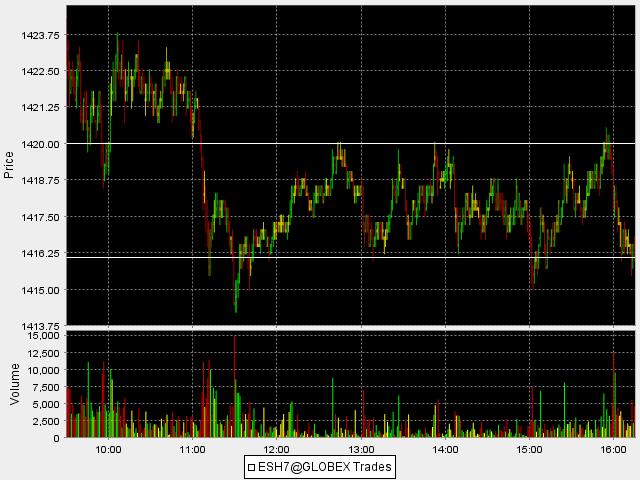 Thanks for the elaboration Bruce. That Martingale system is very dangerous. You usually only blow out 10 to 20% of the time and when you do it's big. You have to make sure that your profits on the winning trades are big enough to cover that loss and that the breakevens are closed out quickly.

I've used the Martingale system in Vegas on Roulette and amazingly won during the one and only time I played. I was, however, expecting to lose and as such was playing on a $1 table (don't believe they exist anymore) and knew how much I planed to spend (lose) on "entertaining" myself with this. I would never expect this to win - definitely not in the long run.

By the way, in theory, with unlimited funds and no limits on the tables I believe that the Martingale system is in theory a winning strategy - at roulette that is.
I completely agree..I would prefer to take the loss and look for the next trade...it also makes it easier on your brain sometimes when you "wipe the slate" clean and start again....this mentor obviously had his limits ( with the minus 8) and he did quite well...anyway the levels are there for anyone to watch....I think the entries can be improved with other ideas to hopefully increase the odds of a winning trade. I thought this was a good example today because it showed the losing trade followed by the winning trade..( Tick divergence chart not shown on 2nd trade).I also think it would be better off trying to trail the winners which this mentor never did.

The cool thing about this guy was that he taught it all for free and didn't have any alterior motive that I could see.......he also came down hard on us ( the 4 - 5 that stayed in the room) when we missed an obvious trade or started trading outside the first hour time frame...he would quiz us and say things like " Ok guys the market just bounce off the minus 5.5 and hit the minus 4 what should you do?" Then I'd type in "Buy, Buy' Buy" and he would come back with "Wrong , wrong, wrong..the floor is gone they've run the window and gone away look at what time it is...we don't trade outside this time frame..stupid..". A pain in the butt at times but he was quite disciplined...he also came down hard on vendors who showed up so I guess the apple doesn't fall far from the tree..lol..Congrats on your casino winnings..that's always good to hear when someone wins .......

Bruce
This strategy does not appear to be one that would be overly difficult to back test. I will keep it in mind for a back test on a future date.
Well people can say what they like about me...I leave it up to you to examine the ideas yourself...here is Today Monday the 8th ..The open was 1418.75 so subtracting the minus 2.5 and minus 4 gives us 16.25 and 14.75....You will notice the market dropped exactlty to the minus 4 so you would be buying the minus 2.5 looking for 1.5 points.....here is the chart... 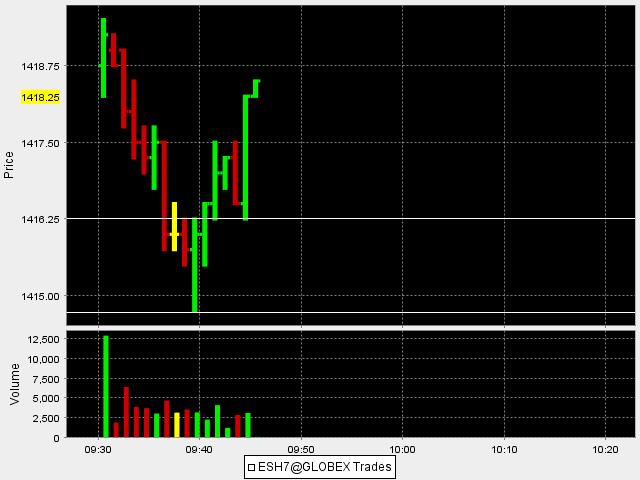 Good luck with this idea


Bruce
and here is the second one..the market made new lows just one tick below the minus 4 so you would be buying the minus 2.5 looking for 1.5 points again...ok...nuff said..... 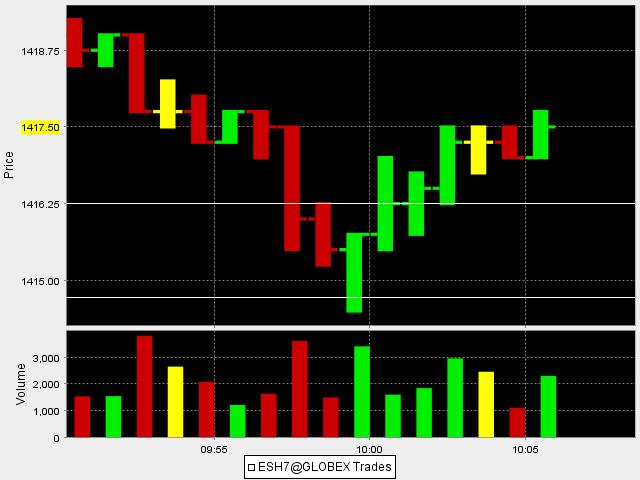 Here is the third setup..I have drawn in the minus 5.5 .at 1413.25.so you'd be buying the minus 4..with a 1.5 point target....I post these for educational purposes...any questions regarding "statements" or "did you actually trade this?" will be viewed as an attempt to discredit me and to Thread-jack these ideas.....I hope they are helpful and you may not like me or my style but I have given of my time in an attempt to present some solid ideas...so this last chart is for my detractors.....IN YOUR FACE...lol

big mike...is this one of bitmans ideas u r using on weeklies