Here is something I'm keeping a close eye on, especially as this rises right into some of my key areas. Please refer to my April '09 commentary on my website, which shows the overhead areas I am watching. There is also a minor area that was hit at today's (4/13/09) high. 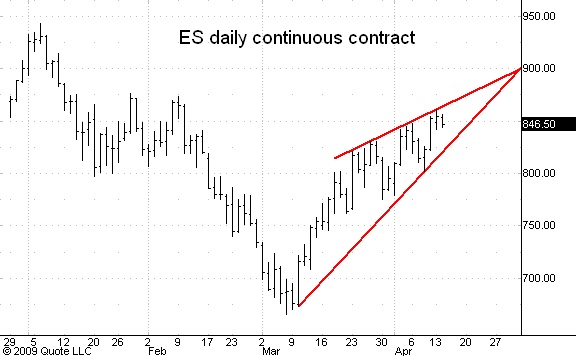 This is a rising wedge, and is very bearish, and quite ominous looking. You can draw the lines a bit different if you want, perhaps not starting at the low, but starting at the 3/30 or 4/1 low, but the pattern is the same. Having this pattern form right into key areas makes it all the more ominous. Just something I am watching, as always, price action is key.


Chart created with QCharts, courtesy eSignal
Jim,
I felt the same way about the down side last July when we were at 1313.5 that every one and there brother were bearish and selling there 401k or getting laid off, and all seemed so bearish I thought the bottom was in place, and look how much we fell from there. We have gone down for so long so hard that a few hundred points seems almost a drop in the bucket, will there be bumps in the road...of course there will be. But the "long term" bear market is over.
$vix is WAY down, oil is way up. Don't fall in love with one side, I do that all the time....this is one of the few moments when trading is simple and beautiful trend and that doesn't happen much these days up or down.
I agree Joe, I'm just saying I get real queasy when everyone is on the same side, including my most respected trader buddies. I can't recall who said this, one of the old old timers, but it was something like this. If anyone knows the exact quote and who said it, feel free to let us know.

"Our job as speculators is to recognize we are on a runaway train headed for a cliff. The difference between us and the plain suckers, the public, is that we plan to jump off right before the train goes over the cliff."


I agree 100% with that. It's just that I always feel uneasy when the train seems to be getting overloaded with giddy people from the public...
This is a very interesting topic, I beleive personally and have to disagree with you Joe this long term bear is far from over the severity of what has transpired has been vastly underestimated, we have been in an unprecedented meltdown, financial crisis which is still not over global debt mountains worthless paper being touted as currency assets bubbles burst not just one thing thats has caused recessions 3 things and global, yet the recession is over after 17mths.

I do not think this bear is over by any means just having a rest whilst it sucks the optimists to committ enough before it crashes again, I believe the next stage will see credit cards taken awy from people because they are not paying them then interest rates on the sovereign debts starts to rise because confidence will subside on it being paid everyone is talking inflation I beleive the opposite severe deflation and with any rise in real rates even if im wroing it will keep a lid on inflation anyway but if I am right it will put ewven more severe dwnward pressure on inflation which will only make the debt being carried now even more of a weight which will eventually topple the dollar and the pound, I listen and repsect price action and given how severe we went dwn in wave one wave 2 will carry higher and longer than most think enough to make the next time we correct dwn catastrophic to those caught in it which will be just as many as the first wave gvn the amt of bullishness I am seeing, you can flood a market with money what you cannot do is make people spend it when they have no job and no prospects of getting one the US is a consumer led economy and its not going to be going forward the purchasing powere to drive it wont be there I beleive unemployment will rise well above 15% by the time this bear is done we are not even a third through it but agin the prcie action will be repected by myself if im wrong im wrong but when I see so many so feircely sure this is done I know in my gut it is not you do not spend you way out of debt ask anyone whos gone bankrupt this is what the goiverements have convinced the public they can do when we start dwn again and we will that i am sure it will becompounded by the fact they will not be able to spend anymore and thats what will be the tipping point no more credit for the country game over everyone is affected even the China as they see their reserves turn to dust because they are wqorthless. just my opinion but only time will tell.
Jim,

One thing about the news is they are always bullish when the market is advancing and are always bearish when we are at lows even short term lows. Remember a couple weeks ago when we were at 876? Most not all on CNBC had us back at 665 before summer. I could be wrong it happens daily. But I am confident the first sign of weakness I will be shorting the majority of the time like always. Right now 70-80% of my trades are longs. And they will continue to be as long as we make higher highs than yesterday, make higher highs than mon-tues range ect ect.


I agree with you Joe, the teletubbies are always bullish they rolled out analyst after analyst even as the mkt dumped to talk up stocks, they are rolling the same ones out now to pat each other on the back, just on fundamentals earning estimates are to high and evyone seems to think it will now be business as usual as for Ganns comment never say never until then I like you respect the price action. A vedry wise man taught me dont trade what yu think trade technicals only and I still do because that has kept me out of trouble when fundamentally things did make sense in terms of price action to macro developements so I stick to that and so far all the best traders I come across do the same, by the way I have only been on here a little while thx for sharing your insights they are appreciated and to you as always Jim
Yes nick, I to tip my trading hat to Jim, I love reading his posts here and on his site.
Next week ES: If we break/close above 952.00 we head to 965.00 area where we
will turn back to the 920.00 area...we'll see... oh yea we got a so9 up there.
just my 2.5 cents :)
Emini Day Trading / Daily Notes / Forecast / Economic Events / Search / Terms and Conditions / Disclaimer / Books / Online Books / Site Map / Contact / Privacy Policy / Links / About / Day Trading Forum / Investment Calculators / Pivot Point Calculator / Market Profile Generator / Fibonacci Calculator / Mailing List / Advertise Here / Articles / Financial Terms / Brokers / Software / Holidays / Stock Split Calendar / Mortgage Calculator / Donate