Here is the weekly RTH volume profile through Thursday. POC ins the thick red line at 1339. Compared with the relative volume on the lower pane saying this is a low volume environment, prices are simply digesting the big move up from Tuesday. More sideways action today or do prices break above/below this congestion? 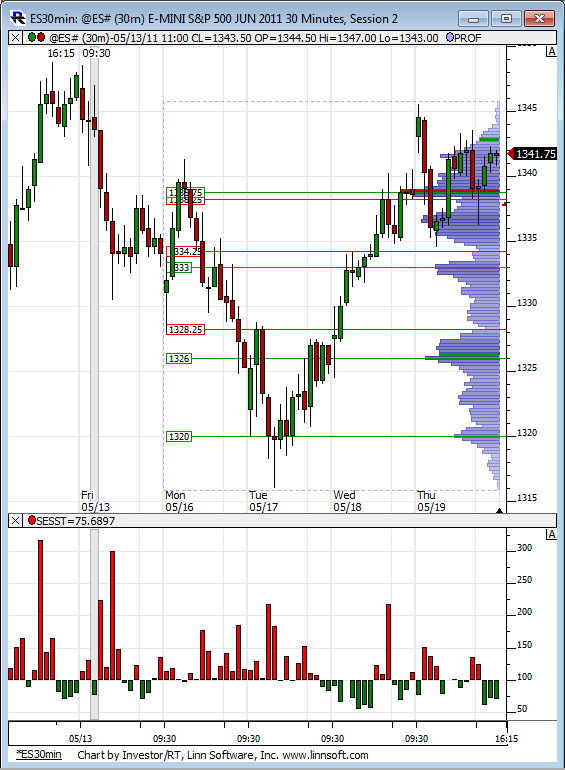 This is from PAUL...I don't know how to move a post over but credit goes to Paul for this post below:


I just wanted to quickly mention that there is a Breaker Bar in place in the overnight. I am looking at 30min chart 24hr prices.
A breaker bar is a wide range bar (relative to other PA) that breaks out of a zone of sideways consolidation.

If price can swing back up to test that open, PA is very important at/near that level, I consider it an inflection price point where price is either going to break up through it or be rejected. I have no idea what the volume profiles look like, maybe Bruce can update.

Also, I mentioned the 600 period exponential moving average yesterday. It was hit yesterday, was followed by a bounce and then was tested again and was followed by a bounce (intraday). I got this stuff from the gapguy, he got it from Chaikin, Gap guy noted (sometime in the past 2 years) that if price closes ABOVE the 600xma one day and then gaps down to open under it the next day, historically the odds are High that the gap will not fill.

These are 2 price points of interest to me for today. Prices where I will be watching PA for clues of direction.

One additional note, if there happens to be a gap down that opens only a point or two below the 1336 level, that would be the infamous 1334 level which has been it's own inflection point this week, if there is a gap down open below 1336, but price recovers in only the first 15 or 20 minutes of trading, then I consider the observation defunct (trash, no longer useful, a dog, a bow-wow, a barker, a canine catastrophe).

Also, for the people who are looking at the stretch stuff on another thread. If this is the standard Toby Crabel 10 day stretch measurement it would be 4.42 for the ES for today (it is based on RTH only).
Based on some information Monkey Meat has provided there is a strong bias for selling in the first 30 minutes of trading on Opt. Exp day.

This has also been confirmed by a study I saw on Elite but can't find it now. The bias seems to be stronger when we open UP on the day. Just pointing that out.
Bruce,
you copying my post and sticking it here with is the cheapest way to improve your vote count that I have ever seen.

I am laughing right now. Please take no offence from this post.
Good morning, gents. Thanks for the early posts
a gap in data at 42.50 but I must add that it was created in O/N session...not nearly as reliable as day session.

So Far Overnight is inside YD day session so we need to watch yesterdays extremes closely today and fades above or below the O/N highs or lows need to be monitored more closely than usual as we have Yesterdays RTh ranges very close by close by.

If I had to pick a trade I'd like to see a very fast push up in the first few minutes that fails up near the 41.50 area as volume is up there.
Stumbled across this info on a "study" done on quantum chart's website. There are more details and particulars provided here: http://quantumcharts.com/trading-strategies-reports/backtest-stock-trading-strategies.html ... and you have to scroll down to the heading S&P – OE, as there are several SP strategeries described on the same page.

Based on some information Monkey Meat has provided there is a strong bias for selling in the first 30 minutes of trading on Opt. Exp day.

This has also been confirmed by a study I saw on Elite but can't find it now. The bias seems to be stronger when we open UP on the day. Just pointing that out.

That's funny Paul...but I deserve it, I fixed the 1366 which took great effort on my part.....LOL......always great to have some chuckles in the serious world of trading!! We need it !!

Bruce,
you copying my post and sticking it here with is the cheapest way to improve your vote count that I have ever seen.

I am laughing right now. Please take no offence from this post.


I see that in the above post you do mention "exponential" at one point, so I gather that is what you meant. I've just never heard it labeled "xma".
It's all good...I just wanted to make sure that nobody trades for O/N triples or anything mentioned on these threads without doing their own research first.....

Most know not to do this I hope...

u have a great weekend too..

Absolutely. Thank you. And I sincerely hope my comments are NOT taken as sarcasm. I was simply amazed by the market movement today and thought I could add a touch of humor to what I considered a WOW moment.

Actually hoped it did fill for that virtual group high five moment!

If I don't say anything else, I'd like to take this moment to wish everyone a great weekend! g'night!

I have no evidence of the reliability of Triples in the Overnight session being run out so use them as targets at your own risk.....

nice run of those triples from yesterday....without me...