On Thursday the market opened below the value area and never returned to it so not giving the Market Profile trader a chance to get short from the VAL. Considering the size of the down day we had today I'm surprised that we only got one single print out of it in the Q bracket at 1206 even. 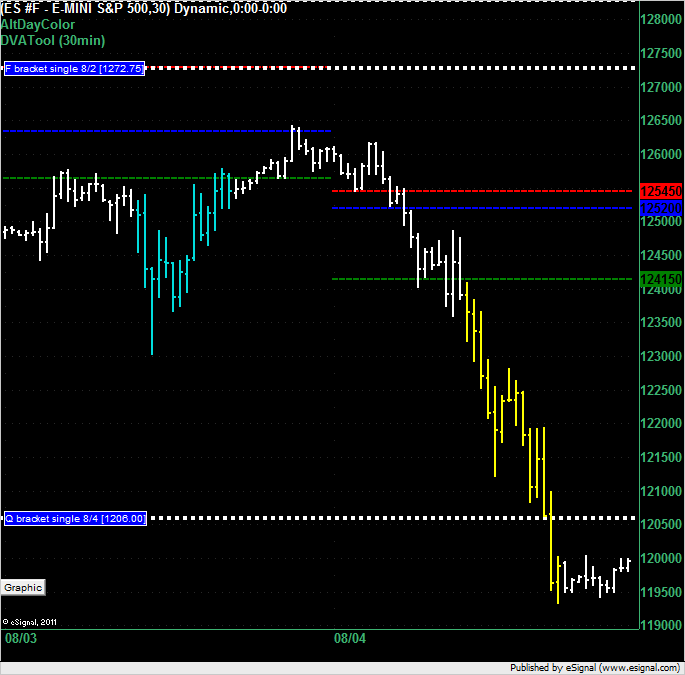 The baseline of that H&S pattern is about the 1260 area.
The Daily 200 MA is about 1278.
The Daily 50 MA is at 1296.(Why you trade price, not indicators- even though I rely on indicators myself.) This is usually calling for some kind of return but the daily trend is flat for the year(sideways). All that up and down occurred with them in the same vertical relative positions.

I would think a shallow return, IF there is one, to sub 1218 area/level would be (or at least could be) very negative here.I mention it because the projections from the 1347.75 high has 1196 as the 238% level(approximate). The 261.8 is at 1181 just to point out the potential for lower. I'm thinking retaking and holding 1200 would be used as a kind of victory by some for Friday, if it can do it.

I point these things out since the low today actually broke the high of last October. The traditional thought is a H&S pattern declines at least a length equal to the heigth. Calculating from 1260 gives one a minimum target of approx. 1137, off the top of my head. If correct, the path to it more important.


I'll also note that a usual correction target would be sub 1100 by a few points. This could be just the first of 3 waves down. Trade with the trend until it's broken.

Some other projection levels are 1188 and 1158 from the yearly high here.

It's been fast and I doubt most(nontraders) had a chance to go to cash/money markets/etc... It doesn't have to slow down. There's been no real recoil yet. By the time most decide to exit, it's too late.

Then again, a correction Friday,would give hope to the weekenders and 401k holders, if given the chance.

I know it's rambling thoughts but only what I thought of as I typed.
Just sharing fwiw. 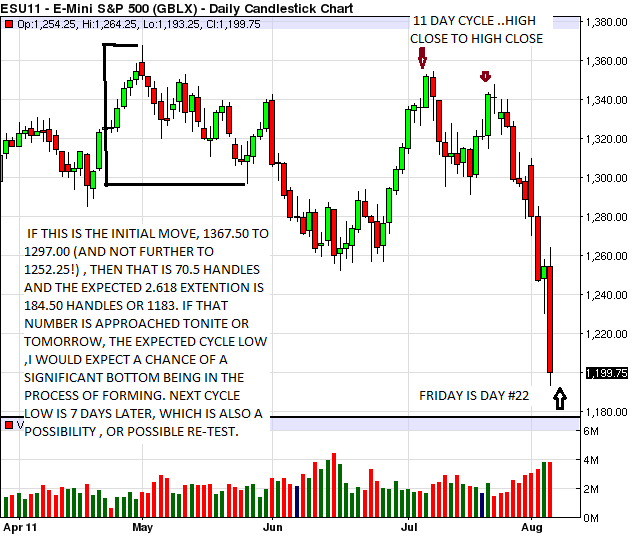 sentimenttrader seems to agree with the possible Kools Tools analysis.."The most likely scenario, based on the kinds of extremes we're seeing and the magnitude of the price moves, is a 2 to 3 day relief rally, perhaps after an early dive lower and recovery on Friday. Then we get a re-test of that panic low, and subsequently head higher for the next 1 to 3 months." and also.."We respect the ominous technical condition of the market, which means rushing in to buying into falling prices may not be the most wise choice. If we do bottom somewhere around here, then there is typically a re-test during the next one or two weeks that creates a better buying opportunity for longer-term traders and investors, and that's the kind of opportunity to take advantage of the breadth and sentiment extremes that we'll be looking for." 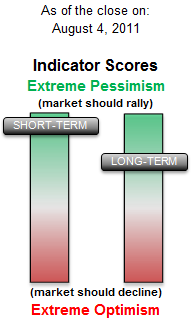 Thanks, Kool, much appreciated.
prestwickdrive, if you are around, how would you treat that 1min bar that spiked down before the 8:30 data and then obviously moved up leaving a gap in data in between

thank you
Hi KB, Welcome back!. I was posting some Kools Tools driven price projections yesterday and tried to explain a little of the methodology, as I understand it. If you have time would you please review the Thursday ES posts and correct any errors in what I wrote should there be any? Much thanks.