Good morning to all. The past few days have seen a lot of selling/liquidation in the market as evidenced by the chart below. The next downside target is still in the 2035/2040 area as noted by the lowest line but at this point one would imagine that the market has to pause, right? The move up to all time highs was relentless and so has the move down been. We definitely seem range bound over here. 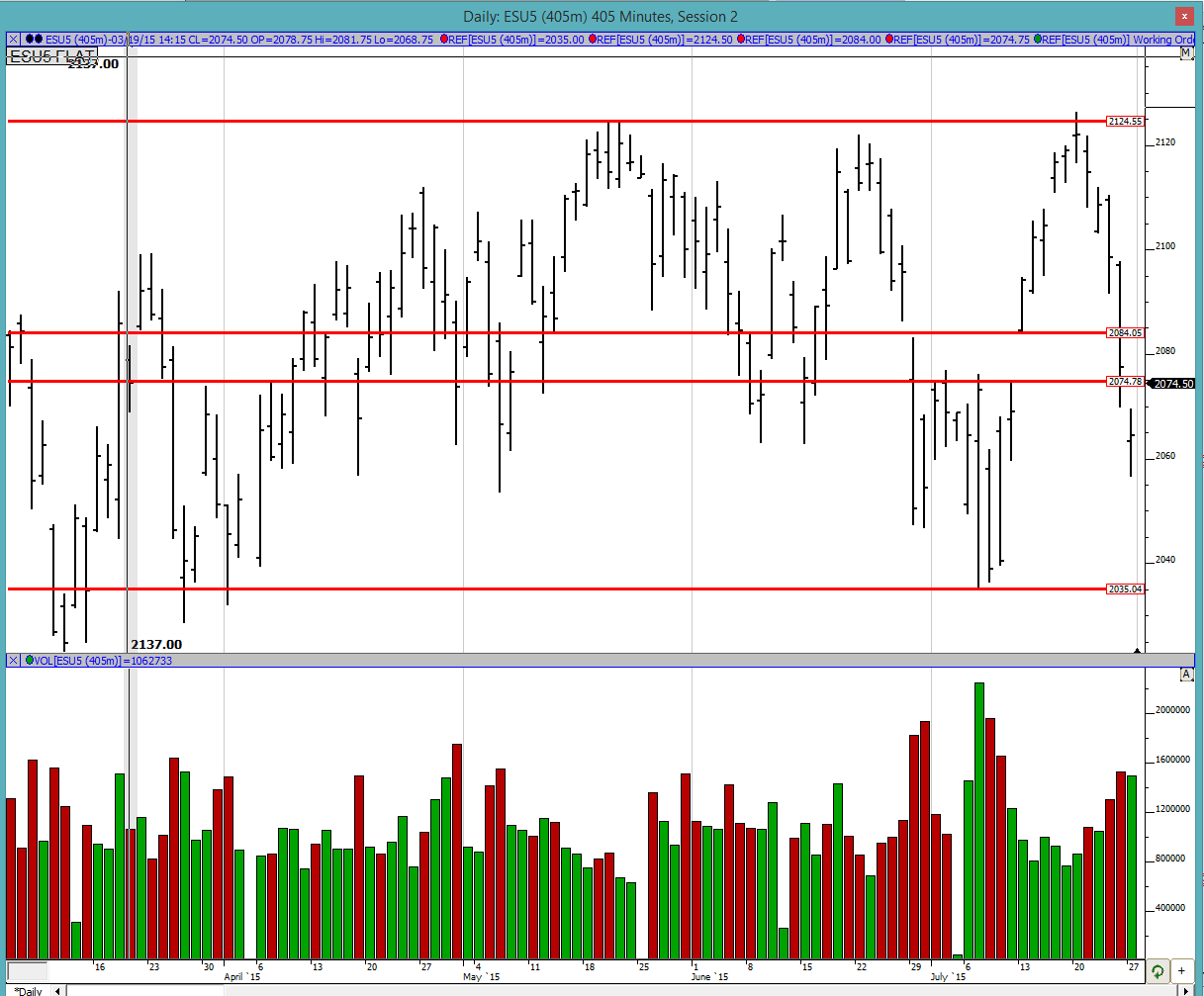 Profile:
Another day with a not so pretty profile. The high of the day can be considered weak because it came right up to the low of 7/24 and brought in the day time frame sellers again. The low is obviously poor due to lack of excess with day time frame buyers coming in right at the low of the day. There is a very prominent POC at 2061.75 which means that it will be revisited at some point in the future. The value on the day was clearly lower due to the large gap down but it was primarily a balancing day as evidenced by the prominent POC. Was this the balancing day before a short covering rally? We shall see. 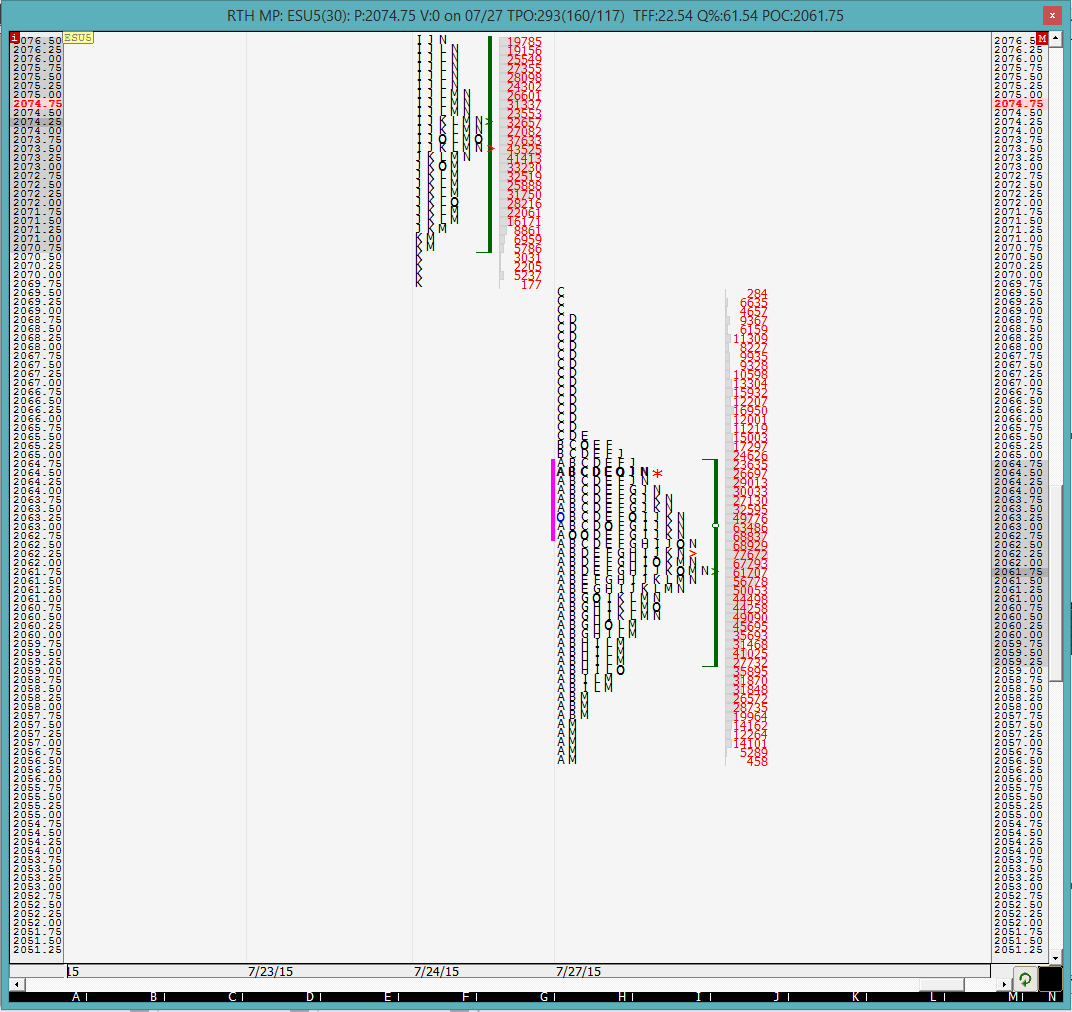 On the split profile we can clearly see the poor low and the weak high. We can also see the typical behavior on a balancing day where the market kept trying to sell off in the G. H, I, L and M periods but kept coming back to the POC. The POC becomes like a magnet and as sellers continued to sell every rally in the day but when they failed to get paid, they threw in the towel at the end of the day resulting in a small short covering rally late in the M period and continuing in the N period to close much higher. This is pretty typical behavior. 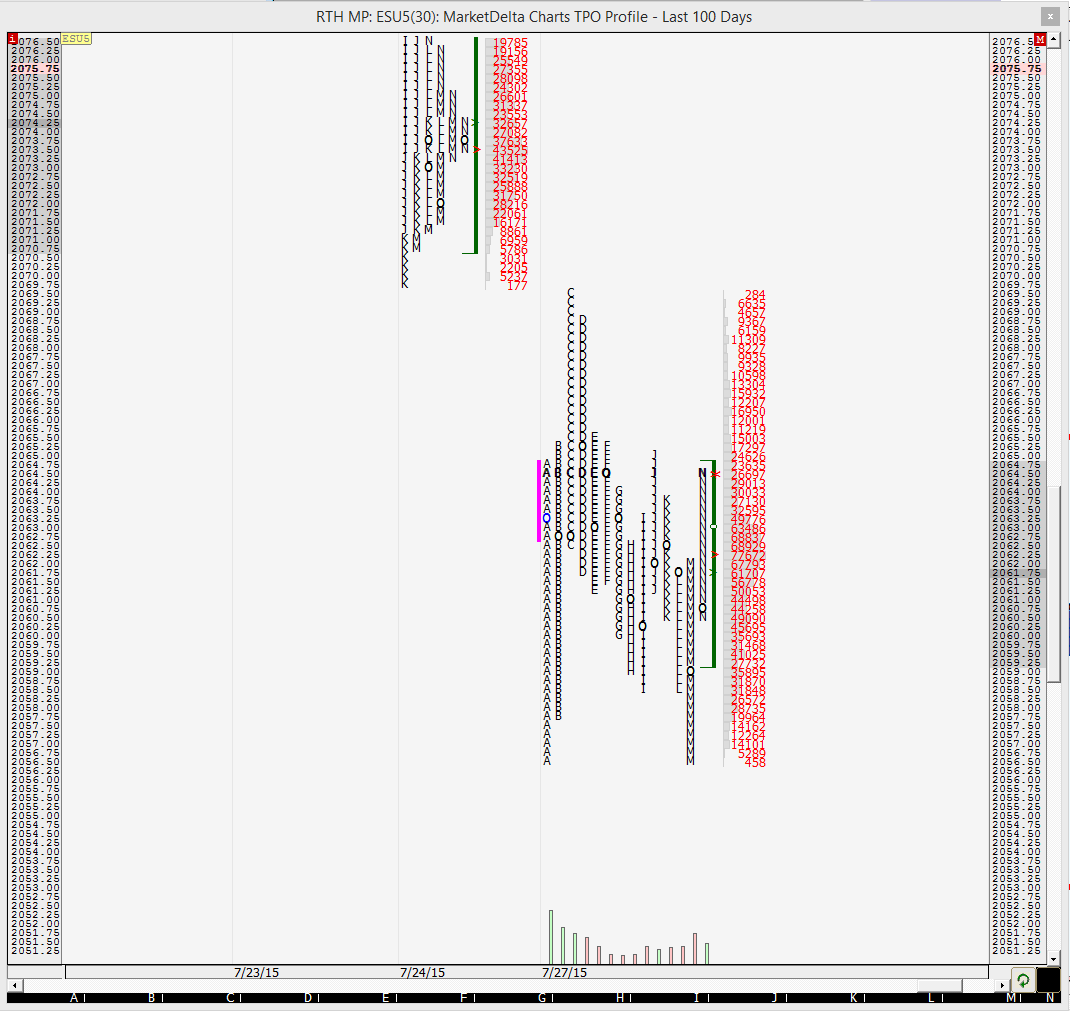 The O/N action has been almost 100% long. We did not get the O/N mid-pt test YD in RTH session so the odds are higher that we get that test today. On the other hand, the O/N action might force some shorts to start covering at the open which could push the market still further higher at the open. It should be a battle at the open so worth watching a little at the start before jumping in.

Good luck to all.
Good morning and thank you for your analysis. May I ask, what is a greenie ??
Sure thing. A greenie is a past developing VPOC (volume point of control). The premise is that prices at which high volume was seen in the past become like magnets and when prices reach there, we usually see a bounce from it because buyers/sellers will come back to defend that level again.
we are seeing the markets back off a bit. we might open close to the O/N mid-pt
Paul, what do you have on your radar today?
we have entered YD's range. Do we get to the greenie in 62/63 area?
if we can get to that 62/63 area in the first 30 mins it would be ideal because that would mean a lot of single prints which would have a higher chance of covering some of them
30 min VPOC has been shifting lower over the duration of time
current low of the day is 63. right in the greenie zone... this stuff does not stop amazing me

also it matches the ONL. weak buyers much?
30 min VPOC @ 67.25 but really 65-68 is all the middle of the volume bell so far
thats what it means to have a lot of prints in the first 30 min period.... most days (except trend days) they will get covered during the remainder of the day leaving an excess on either end or maybe none
Ha. apparently so. we just took out that low and finally hit the VPOC from YD and are very close to the prominent POC.

Since it appears no one else is around and I think I am done trading for the day, I will be back tomorrow.