Market opens inside VA and trades below VAL by 1.5 points. Market Profile theory states that VAL should provide support at 1336.50 but we went 1.5 points below this to 1335.00 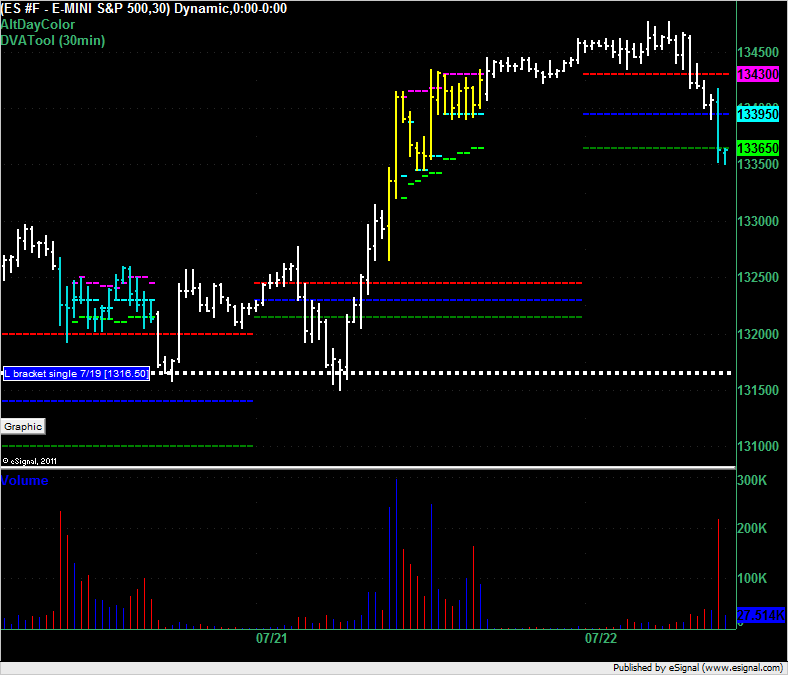 3 markets in dissoncance. ES and YM moving down, Q tries to rally - so whippy PA
Plus news from Norway
10 a.m. ET, 4 p.m. Oslo] An explosion rocked a part of central Oslo, Norway, on Friday, state TV reported. State TV broadcaster NRK said on its website that windows in several buildings had been blown out and people were in the street bleeding. News reports suggest the government building has been affected.

[Update: 10:16 ET, 4:16 p.m. Oslo] At least one of the explosions happened near some government buildings, said Walter Gibbs, a journalist with Reuters. He said he saw eight injured people, including two or three with serious wounds and one who looked dead. Reuters reported that the prime minister was safe.
i missed this last long; 32.75 was the top of yesterday's low volume range that extends down to 29, so not surprising to bounce a bit from that level

now that they have put another band aid in europe, the concern is around the us debt deal, which thus far does not show any concrete signs of material progress so i would expect choppy trading with a chance of filling that low vol area from yesterday; of course do not discard the headline driven spike du jour
I agree with apk781. Once a debt deal is struck the market could go anyway for any illogical reason and interpretation of the deal (IMHO). And I think that the market will move fast as well when that happens.
DT, this morning I looked at the Daily Notes for ES and saw that the Daily Pivot point is marked as 1333.75. My chart shows it as 1339.50. I do not understand the discrepancy.

Does Daily Notes take into the count 24-hr price action?
Just to confuse the matter even more (sorry again)... I have this discrepancy from time to time as well. Although this morning my Daily Pivot was right on the mark with MyPivots Daily Notes. Interesting conflict?...

DT, this morning I looked at the Daily Notes for ES and saw that the Daily Pivot point is marked as 1333.75. My chart shows it as 1339.50. I do not understand the discrepancy.

Does Daily Notes take into the count 24-hr price action?

.............
DT, I am sorry. Heat got my brain. I confused Daily Pivot with POC. Sorry, need a vacation.
Market summary from a Market Profile point of view. The market opened in the value area so most market profile traders would have gone long at the VAL at 1336.50 and either been stopped out or suffered a 3.75 point draw down to 1332.75. The market eventually picked up and headed towards the other side of the value area to a high of 1342.75 which was 1 tick shy of the VAH and a max run up of 6.25 points from the VAL.

There were not single prints today.