Today's volatility numbers based on Friday's trading. I am not sure how much emphasis to place on these today since Friday was a short trading day as well as such a thin volume day but here it is anyways.

covered last at 54.75 print...see video .....that's it for me.....
Bruce, on days like these the question arises, do you have STOPs in place to protect yourself? I know from past that you use discretionary stops but when the market blows through, it is hard to get them in place. What do you do on days like today?
a quick look at how my IB data has the vpoc/poc from two weeks ago.. 11-17-2014..almost a perfect hit so far today....so here is the weekly chart unfolding against that week...note the LVn at 54.50 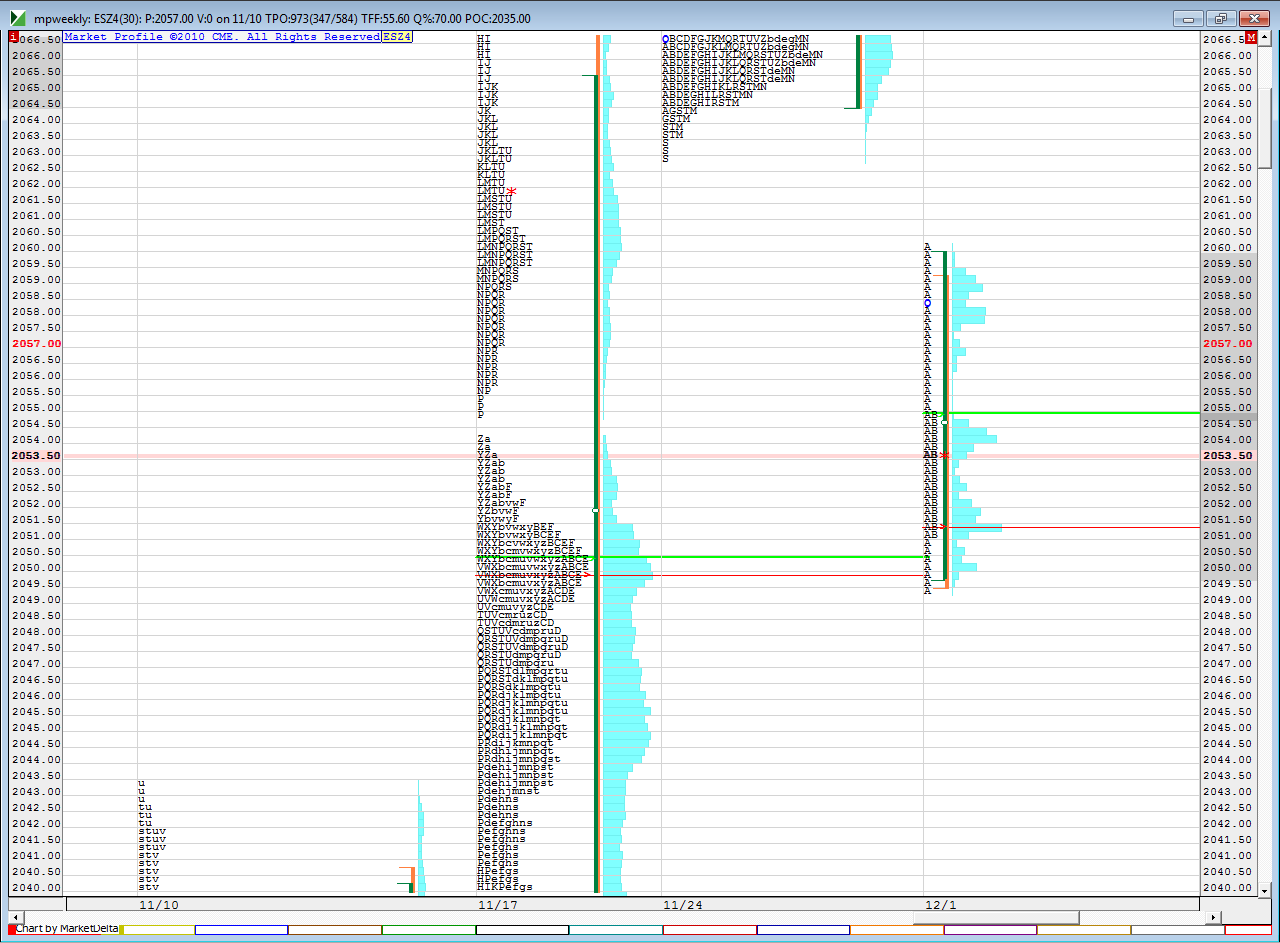 So I'm starting to think short now.
in general I do not usually initially use hard stops ( but will have a 10 point wide stop just in case weird stuff happens) today was no exception...so I just exit at the market and take the loss....then try again if i see some slowing down in price at my numbers ..today the loss was bigger than usual as it just blew through so I took a 2.25 point hit.........I take many small tries and don't care about taking multiple small losses

I like to see SOME slow down before putting on a trade at my zones...that is CRITICAL to me......via time and sales....usually I will work a zone up to three times and often do not get it right the first time.....a good alternative is to define your zone and then let the market go 1.25 - 1.5 points up off a low or down off a high to enter but to use that method u need to be prepared to take losses and not be afraid to get back in the game....

often when volatility is low and we have multiple zones close to each other I will use two zones at once.....so at one edge of the bell I will go in small and then add bigger at the center.......but I always have an uncle point and a spot where I don't want to see the market trading at and if it gets there I exit for the loss on those kinds of trades.....I try to keep everything in context and try to do it all early and don't add in front of reports.... today is a good example...just knowing that the 2060 had tested was a clue that possibly they were going to reject that and the lower edge may not have held......so I didn't average in and also didn't see any slowing in price.......so I hit the "market" order button to exit...i also didn't see any slowing at 52 but saw us slow down once we were into the 2050...so got in long down near there

Bruce, on days like these the question arises, do you have STOPs in place to protect yourself? I know from past that you use discretionary stops but when the market blows through, it is hard to get them in place. What do you do on days like today?

thanks for the explanation Bruce. nice trading as always
I hope they will play nice today....

Now it is time to divert my attention to today's live webinar by Jim Dalton: How to combat overtrading.