good points Paul...the only thing I was taught in terms of trading ideas is that if we open in the upper stem of a "b" profile then look to sell anticipating a possible retest into the belly of the "b"....and the reverse I was taught for the "P" pattern.....an open in lower stem is a buy....but never do I hear about continuation from Dalton........although many volume profile traders look at "P" profiles as bullish and "b" as bearish.......but I really don't know what to think...I just look at the bellies as bell curves and it sucks to trade them as they are unfolding......

I know that a profile in the shape of a b is supposed to be longs liquidating... But does the close of the profile mean anything...

Here's what I'm talking about...

If there is a b shape to a profile...DO we suppose some more probes lower if the close for that 'b' profile is inside the wider part of the 'b'? (near the lows)

The reason I mention it is because if you look at the overnight coming into today, it has a 'b' shape (longs liquidating) BUT, the close for the overnight was way up there near the highs of the Overnight session, ===>>>Does that mean that the longs who wanted to liquidate are finished?

As I went back just a little in time, eyeballing rth only profiles... I see b profiles with closes in the bell and then it seems tendency for lower probe the next day.

R2 today is 56.25 !!!!
here is a zone we are hitting into ...with R2 up here it gets interesting...I've stopped afternoon trading althought I did take a few small tries earlier that panned out to nothing 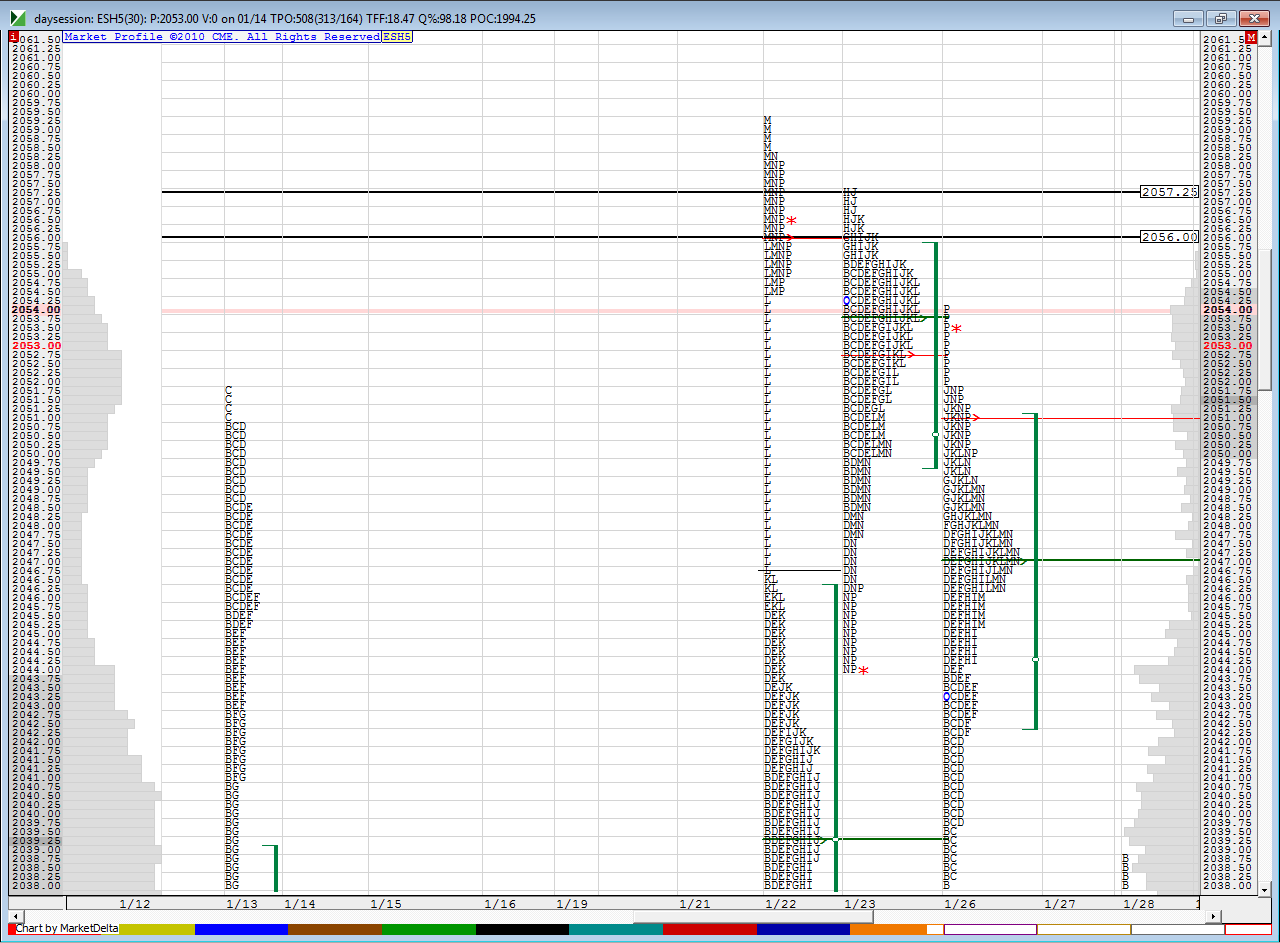 The G and H period lows gave another opportunity to buy back into the belly of the "P. With value being higher today than YD, with the morning rejection of YD's range, that would have been a good place to go long especially with the poor high in the C and E periods.

Alas, I did not take it because again I was too biased
if u read " Markets in Profile" Dalton shows charts and " early warning" signs.....now I am no expert but the shape of Yd and today seems to be an early warning to me that a down move is coming....the struggle here to move higher without being able to elongate the profile....perhaps you can ask him newkid if you get time...of course these charts in the book are after the fact so I wonder what he would say now...today is low volume too.....seems like this isn't new longs now and just shorts covering....at least if we apply that logic it is....
dalton has been talking about the trading range we have been in from 1981.25 to 2061. As we were approaching 1981 on Monday, he said that the short term traders, who have very deep pockets, typically start to liquidate their shorts a little before 1981 and that they do no wait till the exact level to get out. Because they know as they start exiting their positions, they are going to impact the market.

This could very well be the case here as well that as we are approaching 2061, we could be seeing the longs starting to liquidate their positions here.

He has mentioned that the underlying structure in this up move (we have been one time framing higher on the daily chart now for 3 days now) has been suspect because some of the pull backs have come from weak points.

Also he mentioned that today all day the market has been following crude. ES tracked crude all day long and he said that means it is only the weakest players, aka day timeframe traders playing right now. He said that this was a very dangerous game to play and he was on the sidelines all day today.

He also mentioned that with the big ADP report coming out tomorrow, the big boys usually do not do much the day before and that they finished their business on Wednesday. The big drop late yesterday due to the ECB report brought in a lot of shorts and today it was very likely that those shorts kept getting squeezed all day long. He did not see any new money coming in today. Again, because of the pending report tomorrow.
Bruce,

In hindsight, my answer to your question should have been the following:

We have been 1 time framing higher for the past 2 days and we are bouncing off the low of an ~20 day trading range with the next target at 2061. With that information in mind and based on the O/N trading, I will continue to look at the market and see if value is higher today and if we continue 1 time framing higher. I need the market to tell me otherwise.

I know that this does nothing for you now since it is after the fact but for my selfish reason of learning, I needed to share that. :)

you are very bullish newkid....why ?