it is the manifestation of fear/greed that all battle. Combined with small(er) pockets, it's tough. Keep studying.


Thanks, and you as well. Now to cart Pops around to his Dr. appts.
Bruce, I do agree that some of Dalton's analysis is post-facto. I also agree that it can be difficult to be both a trend trader and a fader because those 2 are inherently opposing views. But as far as YD morning's open goes, I put out a post later in the day (after Joe's comment) explaining exactly why I should have taken that short on the open. I readily admit that I did not take the trade, and instead had a big loss due to poor trade management, but I really should have taken that short because the previous night I looked at my charts and had put down 99.75 as a go/no-go level. There were going to be stops below Tuesday's low. Now if I had taken that trade, would that have made me a trend trader? Perhaps I suppose so. I am definitely not saying I am going to see every open and drive but YD's I could see it coming from a mile away but whiffed on it due to my own inabilities.

You have a lot more experience in the market so I respect your views tremendously and believe you when you say that we trend only 15% of the time. I have definitely seen the greenies have a massive impact as well as HTN, LTN, HVN, LVN. So yes, I will look to fade as often as I can off of these critical levels but I think if I employ the thinking I had coming into YD, that too can be helpful and prevent us from standing in front of a freight train.

Let us see if I get better and can call out the next trend trade before it happens. I will take it as a personal challenge. Nothing to lose there, right? :)

And your speeches are always welcome. What are we, if not passionate?

that's the party for me.........this is what is so cool about the market and the cycles .....Tuesdays and wednesday faders had to work hard.........today was a walk in the park......but that is the point for me......and why I usually do not trend trade=- New kid you made comments yesterday about being able to do both and Dalton mentions that but I am just the opposite......

The key for me is working at limiting losses or recovering from my poor trading when fades go bad.....I don't look at being both a trend trader AND a fader....In the first 90 minutes I suggest you work hard at being good at only ONE style....u will confuse yourself otherwise ( take it from one who has)......it easy for Dalton or anyone to give you context and point out what happens AFTER it happens but to be in the trenches and doing it is another story......that is why I bust my ass posting as often.......to show that none of it really is that easy.....ok, maybe today was....


The bottom line I think is to pick a style and stay with it, Don't be a fader and a trender....work hard at when you are wrong on assumptions and don't feel bad if you miss a fade ( if u r a fader) or a trend ( if u are a trender)...The worst thing you can do is say " Oh man, if only I held on I would have made 5 more points etc ( Insert your own number of points here)."........strive for a consistent style....being both and switching gears is very difficult regardless of what anyone says or teaches you...

30 min VPOC at 97.25
hear hear. This is definitely not for the faint hearted.


it is the manifestation of fear/greed that all battle. Combined with small(er) pockets, it's tough. Keep studying.

don't feel stupid ...u should feel proud that u r making progress...

I am impressed by Bruce's ability too. I literally am unable to do it because I feel stretched and stressed. So hats off to Bruce.

Also I am learning that I really have no desire to make a killing at trading. Make no mistake, I will take the big bucks if they come, but getting 4/5 points a day are sufficient to make me a millionaire and if I can average that, I will be more than happy. If I make a fraction of it and end up making ~100k, I will still be golden. That is all I want. To match my previous salary.... ok fine, maybe double it :)

I am always amazed and impressed at Bruce's ability to post and trade nearly simultaneously. What I have found over time, and being in Chicago there are a LOT of traders here, that most of the guys killing it are actually trend traders, in a longer timeframe mostly. These guys are in the shadows and just do what they do. They don't have educational venues and typically don't post on forums. They don't even know most of these places.

Good luck to all.

I was monitoring the 5-min chart like Joe said, and if you look at today, you have LL1, LL2, LL3, LL4 and the LL4 is right at the greenie. Bam, pull the trigger right there baby.... at least get 1 higher high and then rest is gravy.... really cool way to see the market Joe. thanks for that. 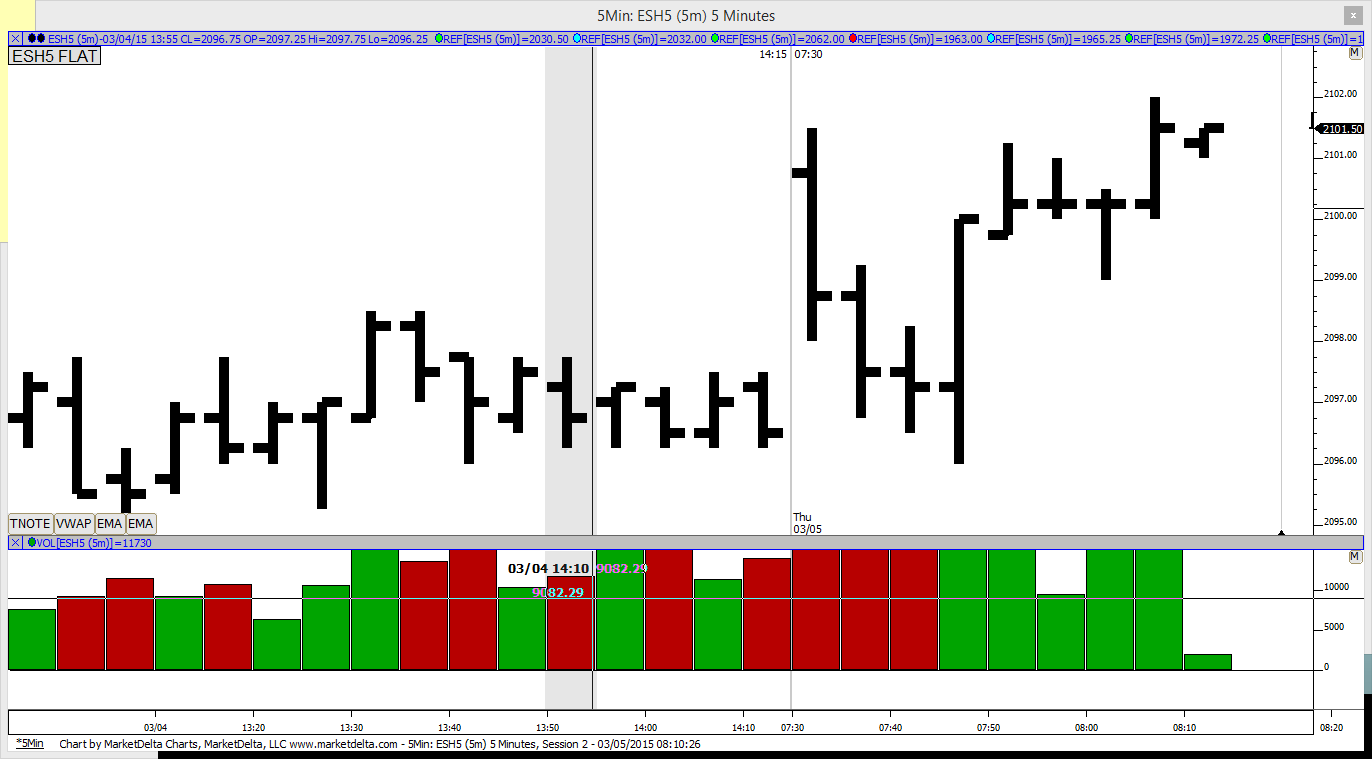 i have a greenie @3.5, which is also the O/N high. Maybe a good place for the market to pause?

Looking only at my EURO line @ 99.25 It broke out then back and there were (14) 5M periods trading in and around that line. That made me feel the line was insignificant today.

Today my read was good. You had a trade that didn't work, we all do!

You need to have a belief in your setup, hopefully born out of careful diligent study. Once you build that belief and your setup has positive expectancy...that's it. Trading becomes rather mundane.
Joe, when you have a minute, can you explain again how you calculated those percentages and what does o.b mean (opening balance? 1-min, 5-min?)?
i know you said you used discretion on where the bar closes with respect its range but i did not quite understand the L1-80%, etc.. thanks