Hello all, it seems that things have gone really quiet over here of late. I have been busy with a few other projects but am starting to get my feet wet again. I think I need to watch the markets for a few days to get my "feel" back. I will start posting the volatility bands from Monday onwards and hope to get back in the thick of things again. Hope to see others start posting as well but I will be posting regardless because I use MyPivots for my own selfish reasons of documenting thoughts. :)

Looks like the day time frame traders continue to be in control and things have not changed a whole lot from that point of view. This would be good for us day-traders I assume but as always need to know when to pull the trigger!

Hope to see you all next week! Good luck to all.
new kid its not just this place.it seem to be alot forums went quiet.
if the market gets to 12.50 i will short with 3 point stop.
duck, i have noticed that as well. i see that BigMikeTrading is quiet as well. Maybe the summer doldrums are setting in?

Why were you shorting 12.5? I am curious because I did not see anything there. Thanks.
fill stop at 14.25
short cause of rat number

out at 14.25
thanks. i think it is best to use those in context with something else while looking for confluence
I absolutely agree with newkid, you can't just trade rats because they are there, there has to be something else.
Look at a 24 hour chart of the past week,
Here's a simple thing to look at.: Swing Highs and Lows.

These are important levels (More important than a naked RAT) because the price action says so. These are levels where price was making a move BUT it stopped and reversed...MANY MANY times, when a swing failure H or a Swing Failure L is broken, it converts that price level to the opposite... if it had been support it can become resistance (A swing failure Low is when the market is moving down BUT then it stops moving down and reverses course. For what ever the reason, that price level is where the bulls wrested control from the bears.

If price moves down through that level then the bulls are finished with it and it becomes a price point of interest for the BEARS it might become RESISTANCE.
Can anyone tell me whether swing Low failures on this chart have been converted to resistance?
You guys already know this stuff, don't you?
For Market Profile people and Daltonites, These swing lows were defining the lower edge of the balance area from the latter part of last week.

I don't have time today to do this and I am not trying to be a jerk, but I am going to ask duck a question... is there a place on the chart that represents a test of former support?

I am going to try to put a chart up
how do I put a chart on this thing... good god almighty.

Does anyone know how to put a chart up on this forum? 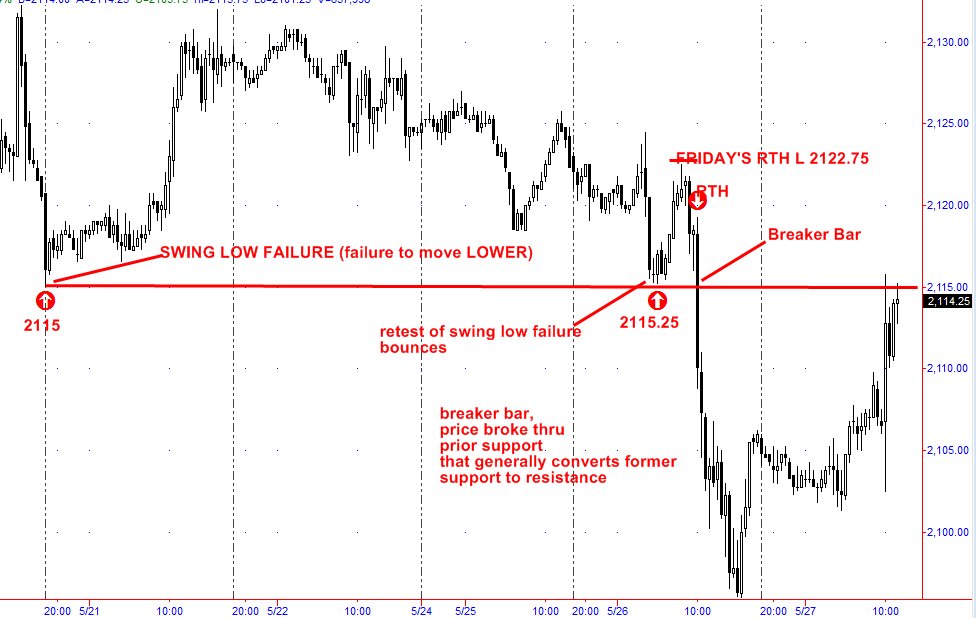 paul what time frame you talking about to show former support?

did i answer it right?
why would anyone think your a jerk for asking question? also we arent on the clock..so take your time in answering does not have to be today.

yes new kid and you are right about having confluence.. today proves why you need it.

paul what time frame you talking about to show former support?
ANSWER: I look for swing failures that are within 3 or 4 ticks of each other. and for the bigger moves, I prefer to see a lot of time in between the similarly priced swing failures. But they can be seen in shorter timeframes also.

on 1 min chart.. the 10.08am bar test 2110 then 1027am bar test it again
COMMENT, duck, it all depends on how often you want to trade. I looked at the bars you referred to, DO you know what the overnight High was? It was 2109.75... did you see what happened this morning about 9:50AM, once price started to move above that level (Overnight High is a reference price), there was a scramble, there were shorts caught and that was their UNCLE point, they had BUY Stops sitting there..(Overngiht High and Low are always reference points). so after that buy stop run, the market tested that 2115 area (this was it's first test, I only have confidence in first tests), price retreated 5 points Where did it go? ... besides having created Bruce "AIR" on that move up above the overnight High (2109.75), it is very common (especially with one sided trade like that 9:50AM Breakout bar) for price to retrace and test the breakout point...
LOOK at the volume on that bar you referenced at 10:27AM... OK, it didn't quite make it to the exact print of 2109.75 overnight High, the volume was HUGE it was defense volume... the bulls aren't letting it get below there for now. SO, yes, you can see it in short term time frame, but it is the swing failures separated by many hours that are more interesting to me.

did i answer it right?
why would anyone think your a jerk for asking question? also we arent on the clock..so take your time in answering does not have to be today.

You answered more than necessary... I was concerned with you blindly trading RATS. I wanted you to notice that horizontal red line running across the chart (those bars are 30 minute bars BTW)... that red line was the swing failure Lows, I positioned the line on the 2115.00 price...Notice on the right side of the chart, the first test of that 2115.00 level from below (2115 was support converted to possible resistance) that first test was worth 5 pts on a short, plenty of room to pick up 2 and a half pts.... I wanted you to try to understand that it is better to have a price point of interest near a RAT, and trade the price point of interest rather than trade a naked RAT.
yes new kid and you are right about having confluence.. today proves why you need it.