Hello to all. Today seemed like that long awaited short covering rally that most people expected. As can be seen in the chart below we rallied today prior to the Wednesday Fed day announcement. We seem to be still balancing in the 2035 to 2125 area. With weaker handed day time frame and some short time frame traders playing that will likely not change for the near future at least but it is something that should definitely be on our radar as we approach any of the extremities.

The previous rally to the all time highs had a very sudden demise. The market did not even attempt to consolidate there and liquidation followed right away. So I am not sure if this means that the bulls are losing control or not but it is definitely something to be aware of and kept in mind as we move forward. 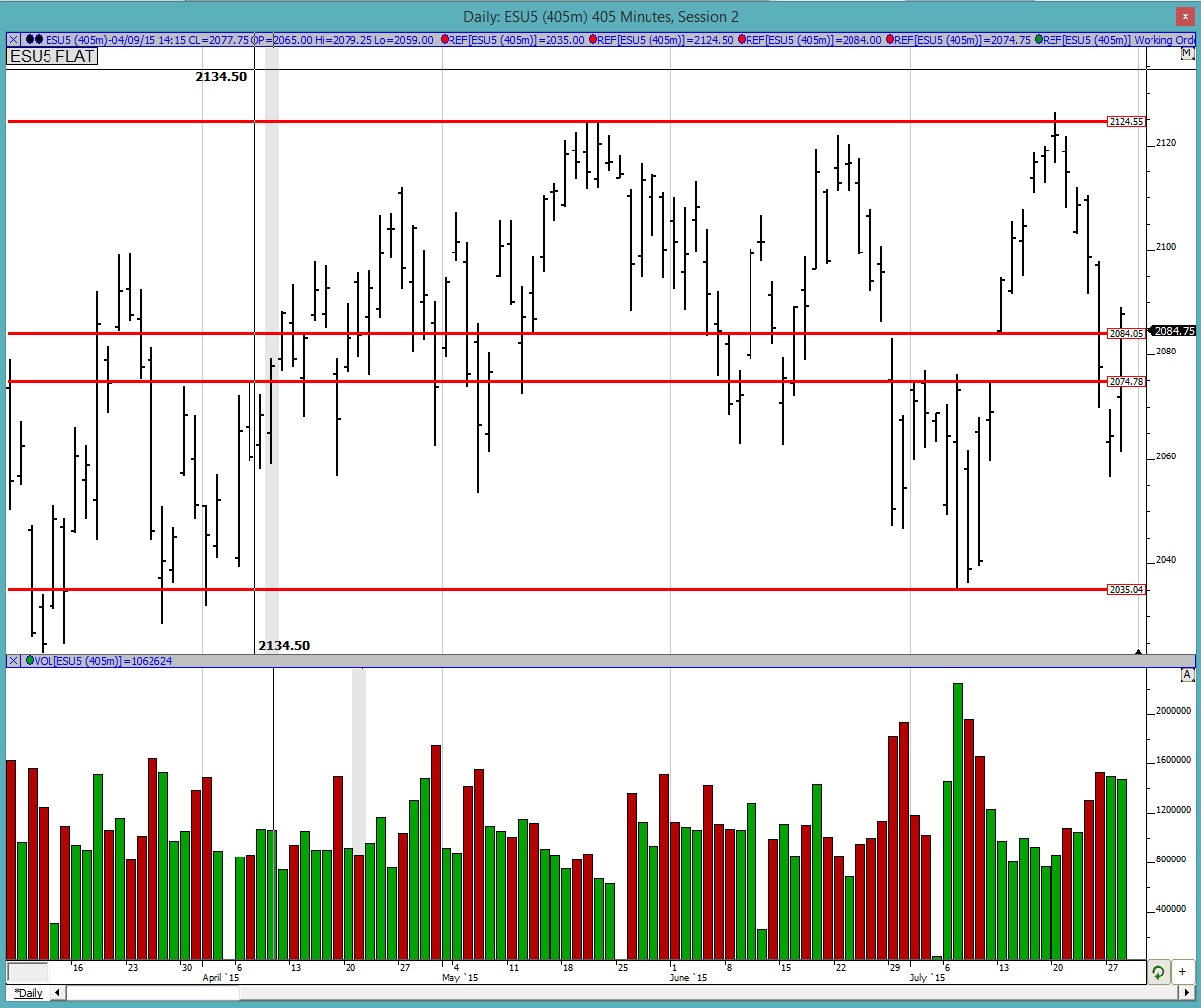 Profile:
Today was again a not very pretty looking profile. It looked like a short squeeze after all that selling over the past 5 days prior to the Fed day announcement. An awful lot of single prints left behind and depending on how you look at it, at least 3 or 4 distributions. It almost has a P shape to it, which is associated with a short squeeze. As can be seen by the horizontal lines (green is POC and red is VPOC) the low of the day was right at Monday's POC/VPOC area. This tends to happen quite often where the buyers come in at that point because that is the point where the last defense had come in. Classic move. The high of the day was also close to another greenie. 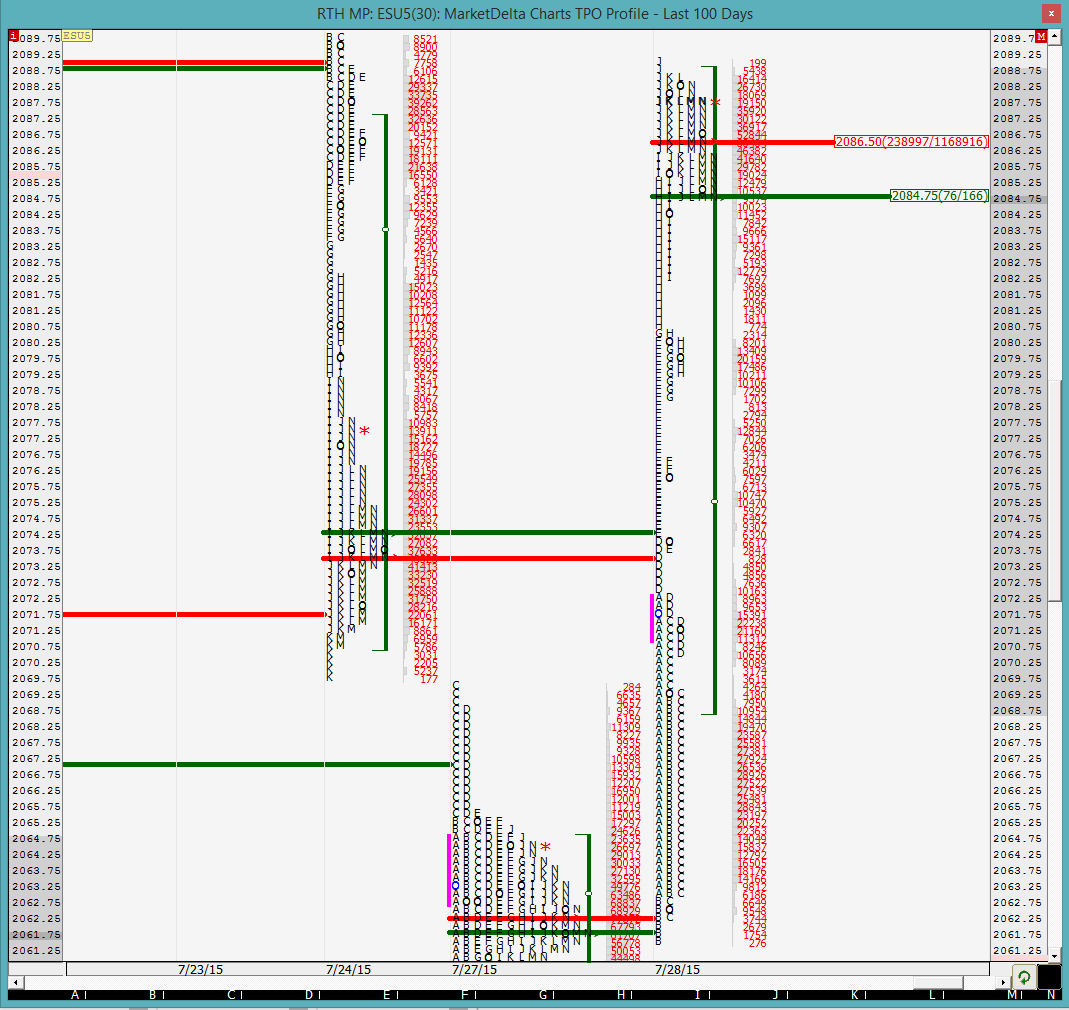 On the split profile seen below we can see that the POC for Tuesday has formed the ledge at 2084.75. That was the only real pullback once the short covering rally started so I will have an eye on that tomorrow. The market started one time framing up in the B period and did not really stop till the L period and even then it was close to the end of the day and it just died out there. 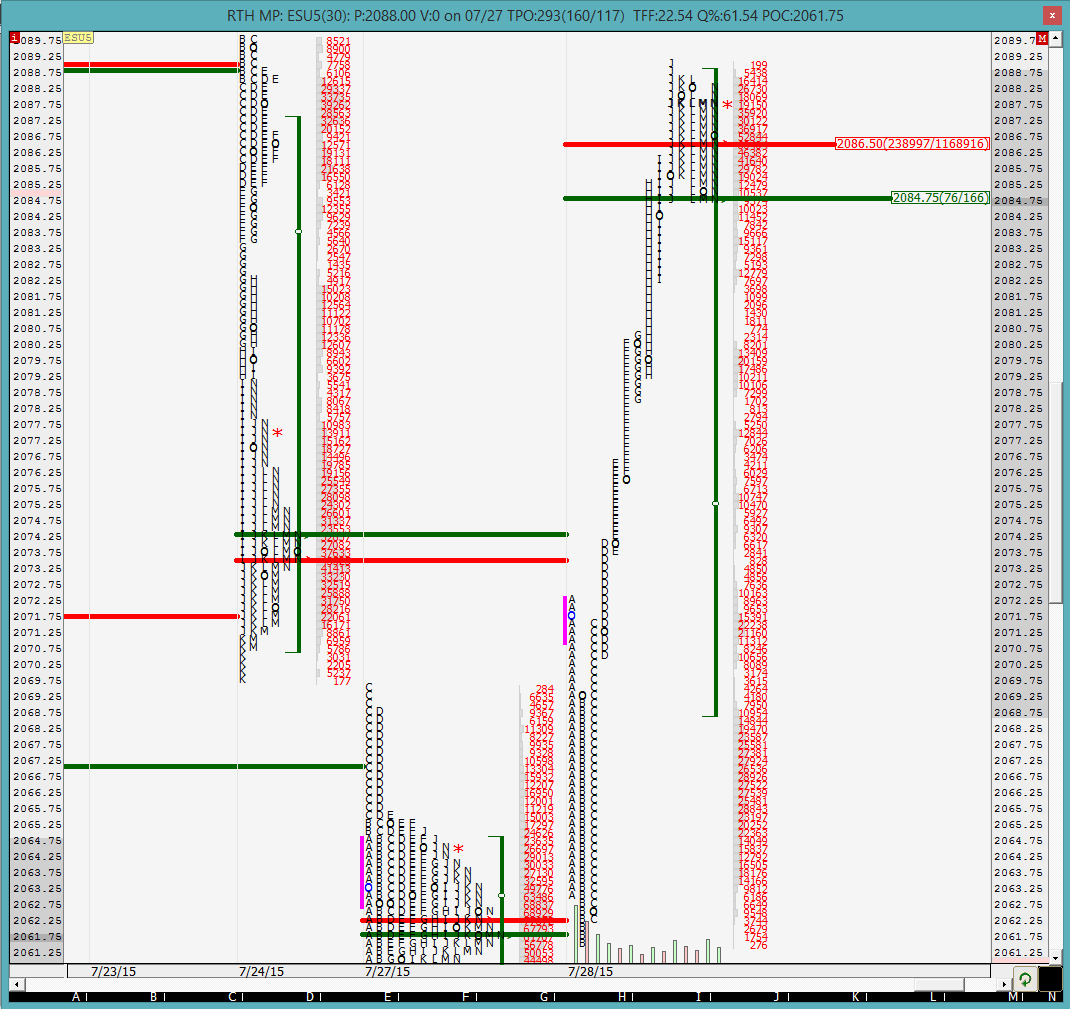 The current week's VPOC is at 2062.25 and last week's VPOC is at 2106. So if the market rallies tomorrow, that is a likely point for it to pause.
Wednesday is Fed day so I do not expect a whole lot of excitement until the announcement at 2pm EST but I also do not like to trade at or after the announcement because things get way too unpredictable for me. So I will see how the O/N plays out and try getting a trade or 2 off in the morning and hopefully call it a day.
looks like the market hit the 2092.75 greenie in O/N and has retreated. The O/N action so far has been pretty neutral with trades on both sides of YD close. I expect this morning to be quiet so I do not expect a lot of trading opportunities. we shall see. good luck to all
multiple times through the open. very indecisive market right now which is kind of expected because of Fed announcement later in the day
30 min VPOC at 89. not sure if there are going to be any trade setups today that i could take
new kid thanks again for taking the time. your 1st post with charts is great.. please keep up the good work..ok big brother send me my email..lol i am short the rat 93.75
thanks duck. i would expect mean reversion to happen today until the Fed announcement but one never knows.... i do not track the rats so it is worth noting that your 93.75 rat goes with the 92.75 greenie which means that there is some confluence there.

take care
duck
thanks for sharing that duck. always good to get another perspective
i thought the market would kind of balance until the Fed announcement but we have been one time framing up since the open. Go figure. This again proves that we should not come into the market with any prejudices and should monitor the market and then act upon it.
For those of you who are curious, 25 years of historical fed rates: http://www.mypivots.com/trading/fedrates
we opened just inside YD's range, failed to stay in it and moved out of it. that was setup as a long trade on a silver platter. we came back in the B period to make sure that indeed there was nothing to be seen inside YD's range and gave an ideal opportunity to buy on the pullback. Unfortunately I was blinded by a preconceived notion and that cost me today. Lesson learned again. 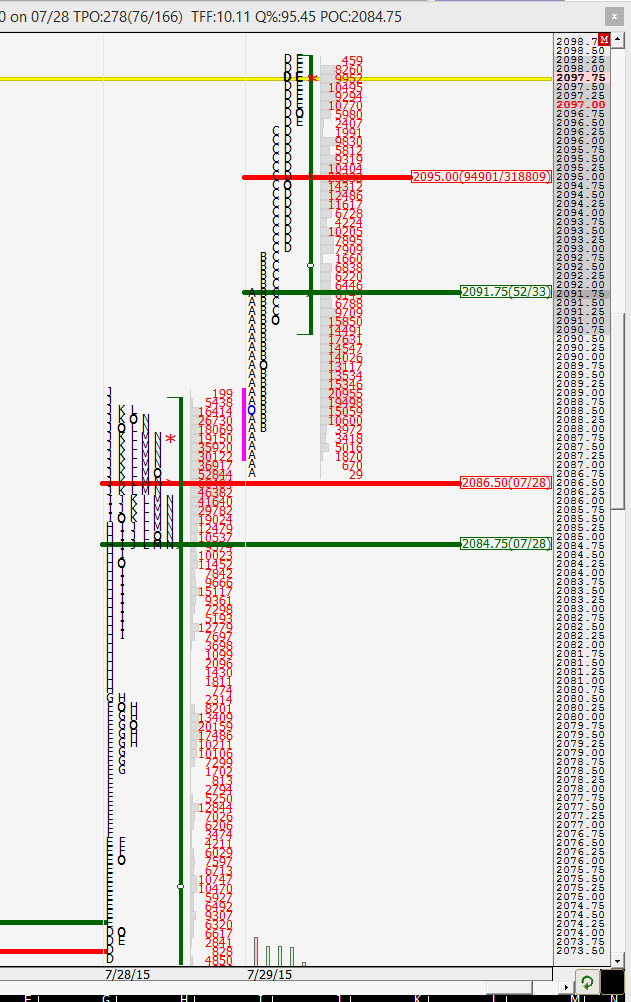