Well, Wednesday was a very unexpected day for me. I came into the trading day having already made up my mind on what the market "should" do, and boy was I wrong!
Let us start with the daily chart seen below. After YD's ugly structure and seemingly short squeeze we had another up day today. The markets are kind of in the middle of last week's range. We continue to be in the trading range with no respite in sight. A lot of today's gain happened before the Fed announcement and after some post-announcement oscillations the climb continued before a late small liquidation. 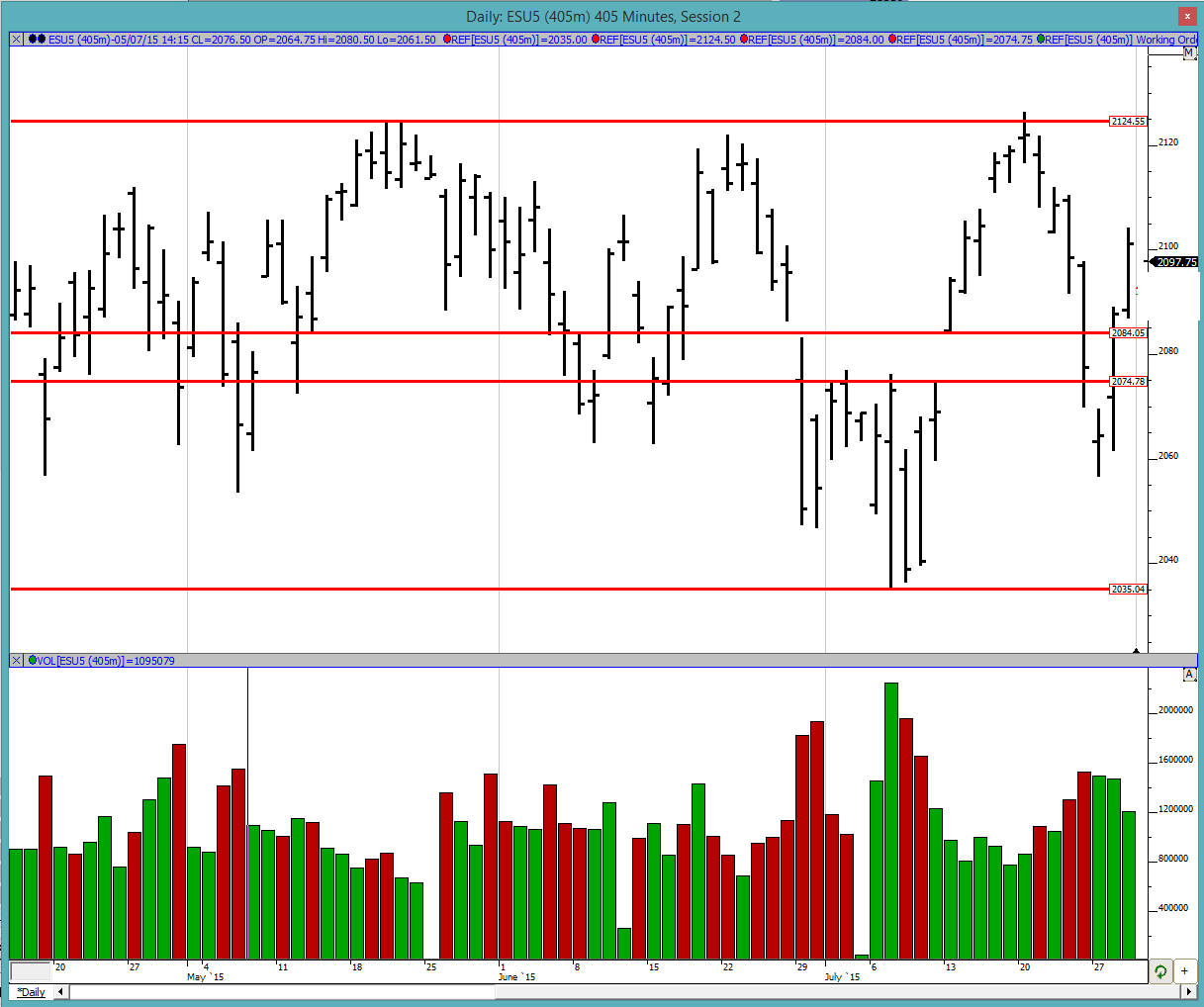 Profile:
Wednesday again the profile was jagged but did not have multiple distributions. There was excess on both the top and bottom as seen in the K and A periods respectively. The POC ended up being close to the middle of the range after the aforementioned late liquidation break. Value was clearly higher and it paid to stay with the value on this trading day. The VPOC for the day though stayed towards the upper extreme of the range. 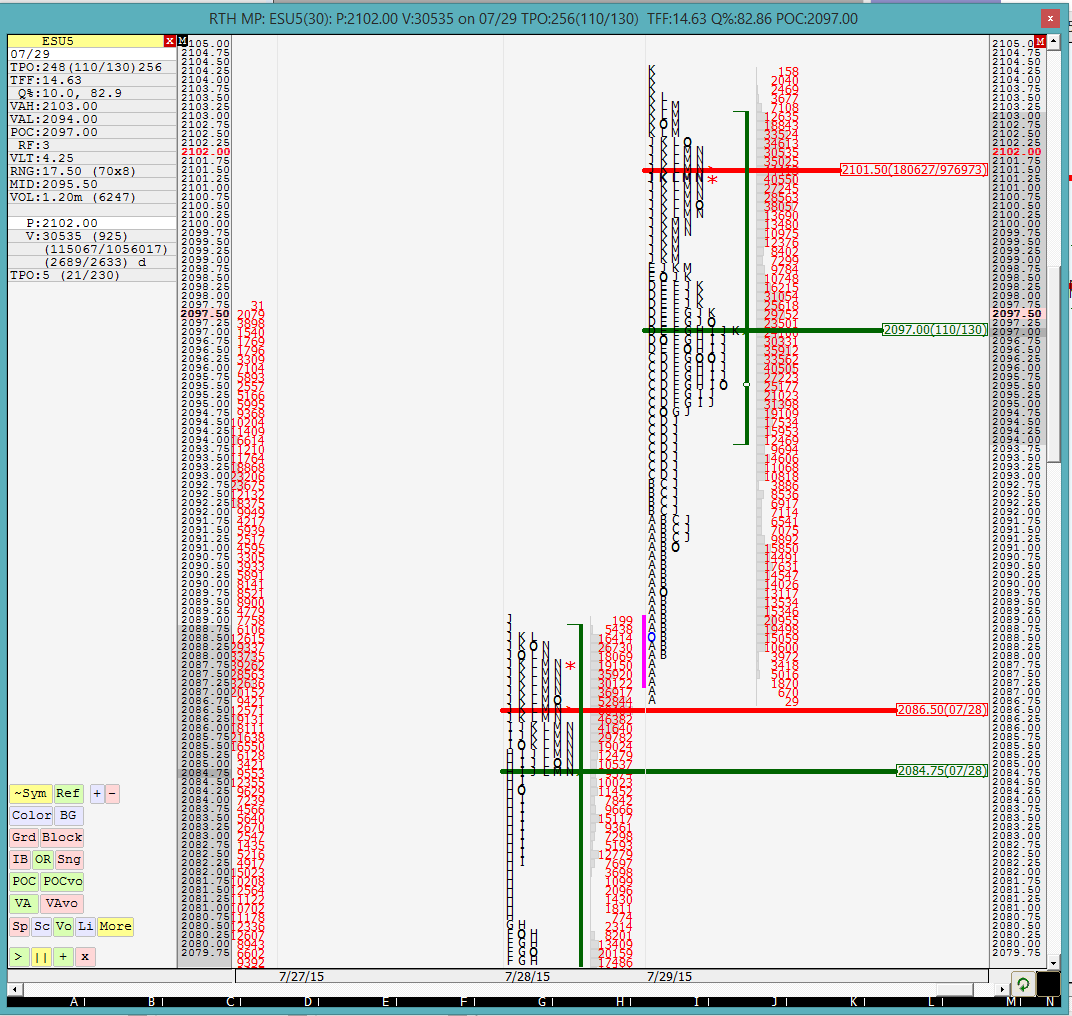 The split profile for Wednesday is the most revealing of the charts. Notice where the A period low is? Right on 7/28 's VPOC. Works like magic. The little pink bar that is seen on the left of the profile is the first 1-min IB of RTH. We can see that after the RTH open and after the 1st minute of trading, the market tried probing lower into Tuesday's range but was rejected right at Tuesday's VPOC and A period was kicked out of the prior day's range. That was the first likely opportunity to go long. B period opened and the 30-min VPOC was at 2089 i.e. right on 7/28's high. B period opened and the market again probed lower to see if there was anything in 7/28's range. B period was again defended at 7/28 close and market was kicked out of 7/28's range. This was again an opportunity to go long on a Range breakout trade on the pullback. This kind of trade is not my strongest attribute and I did not see this trade develop in real time and by the time I realized what was going on, it was too late. This is something I personally need to work on because these trades can be fairly lucrative. Wednesday being a Fed day blinded me to this trade but I will continue to focus on improving at it. The market one time framed higher till the E period and then it kind of balanced until the Fed announcement.

I find the 2097 number to be of interest because not only is it the POC but it was also the pullback low in K period and the market could not probe lower. So I am curious to see how it plays out on Thursday. 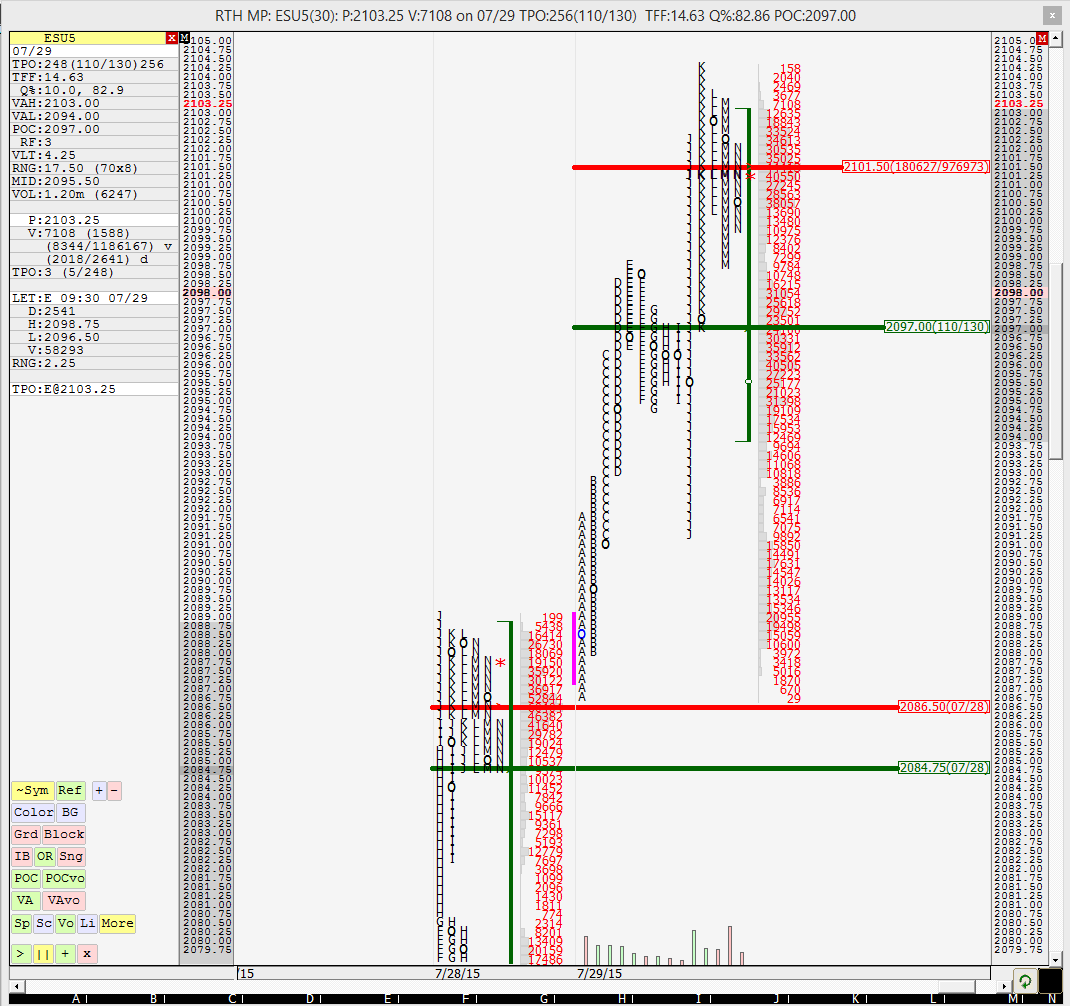 Good luck to all.
Jim, thanks. A poor or weak low can mean 2 things. Either there were weak buyers buying right at the low of the day or that there were no new sellers beyond the low of the day which means that the market is not as weak as it initially appeared. So I would not automatically assume that it is a good idea to short up here. As long as you can define a good place to enter and a good place to place a stop, it is a completely legitimate trade.

The reason I talked myself out of this short is that the market could not even take out YD's low and has bounced back quite substantially. What does that tell me? That the sellers are not as confident and will run away on the first sign of trouble. You are also going to have late shorts that are going to start feeling trapped now and could squeeze the market. The harder it is for the market to take out a reference, the lesser confidence one should have for the market to continue in that direction.

Having said all of that, I can make a case for either going short or stay flat. And when that is the case, I sit it out.

Cannot blame anyone for taking a trade in either direction here.
I hope you took that trade Jim. Looking good so far!
Looks like the value is overlapping to lower today so that would mean if you are to follow value, sell every rally..... of course that could change at any time
Actually I did not ! I just went short at 2097, however. This market feels heavy to me.
well the market went down but did not clean up the low. That is what I was afraid of. I personally think we go up and reach 2101.5 (YD's VPOC) and then take out YD's high. But I do not have a position on because again I am not sure on where I would enter.. Good luck to you though!
I appreciate your feedback!!! I have a stop just above today's high 2098.75 so it's very small risk.
Can you explain what you mean by market felt heavy? What were you looking at in particular? I am always curious about how others trade. Thanks

Actually I did not ! I just went short at 2097, however. This market feels heavy to me.

The daily charts of Russell (RUT) and Midcap (MDY) looks sick, so my view is that ES will head lower: 2030-2020 area and maybe 1950-1970 area (jan-feb lows). Considering the oversold level of the MacClellan oscilator, I was looking for a short term rebound (like the one we are experiencing this week) before selling resumes. I was short from2097 earlier today but didnt take my profit at the 2089 greenie :) I have been following you about 10 days now and I m glad. Many thanks !
that is quite long term thinking. my field of vision is pretty narrow although I do keep an eye on the big picture
Emini Day Trading / Daily Notes / Forecast / Economic Events / Search / Terms and Conditions / Disclaimer / Books / Online Books / Site Map / Contact / Privacy Policy / Links / About / Day Trading Forum / Investment Calculators / Pivot Point Calculator / Market Profile Generator / Fibonacci Calculator / Mailing List / Advertise Here / Articles / Financial Terms / Brokers / Software / Holidays / Stock Split Calendar / Mortgage Calculator / Donate