Good evening to all. We spent a majority of the day within Tuesday's range but a late day breakout to the upside meant we closed outside of it. The close was pretty close to the 1950.5 level we were originally tracking so that is something to be noted. The question from a slightly larger point of view is that was 1992 a lower high or was 1899 a higher low. That could potentially tell us whether the market moves back down or up. So I am going to look for how the market reacts around 1992 and 1899 moving forward to understand if we are going to be making new lows or not. 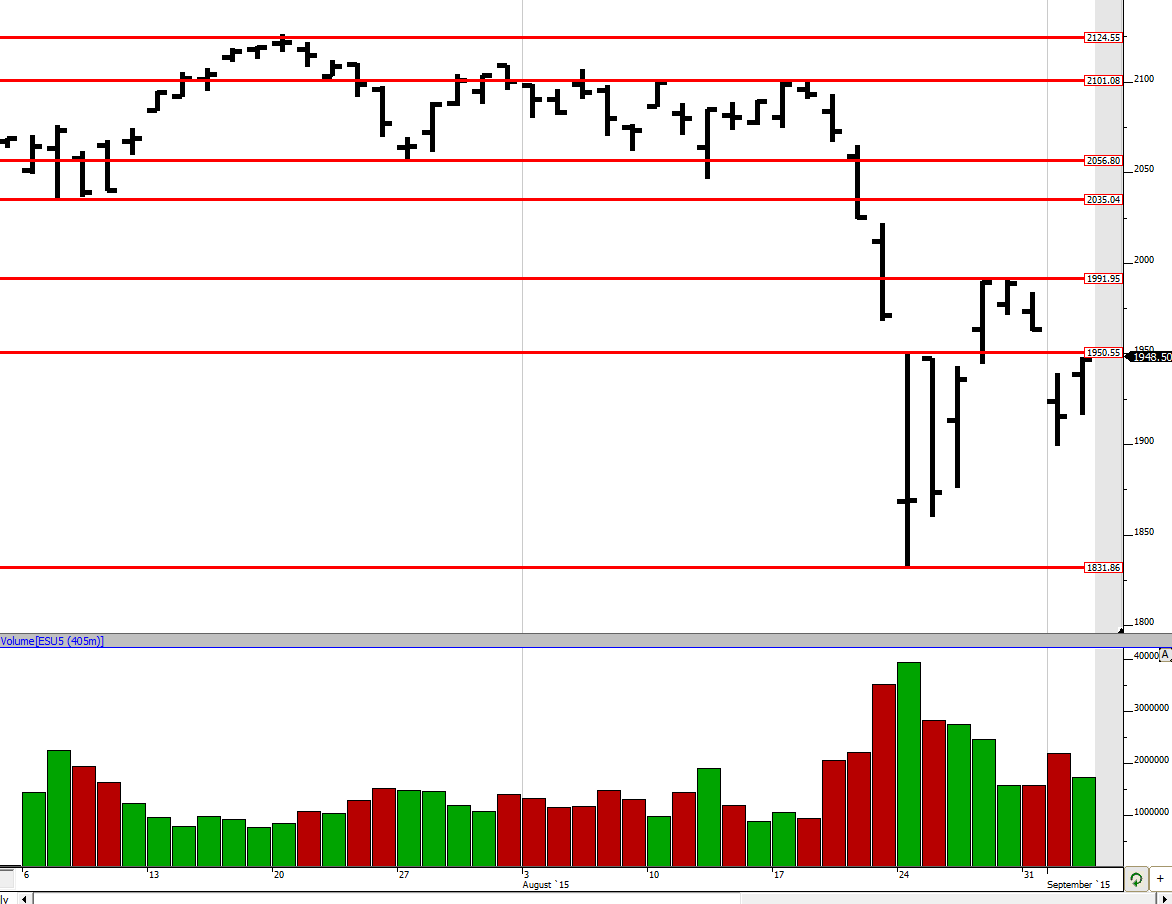 Profile:
As noted earlier we stayed within 9/1's range all day until the late day breakout in the M and N periods. The buying tail at the lower end is technically fine but it does not look pretty. Today again we closed far from the VPOC with those single prints in the M period from 1939.25 to 1943.5. Those could be taken out tomorrow depending on how the O/N plays out and where we open. The gap between 1943 and 1944.25 from 8/27 was closed but the gap to 8/31 is yet to be fully closed until 1962.25. Let us see how tomorrow and the rest of the week plays out until the long weekend. 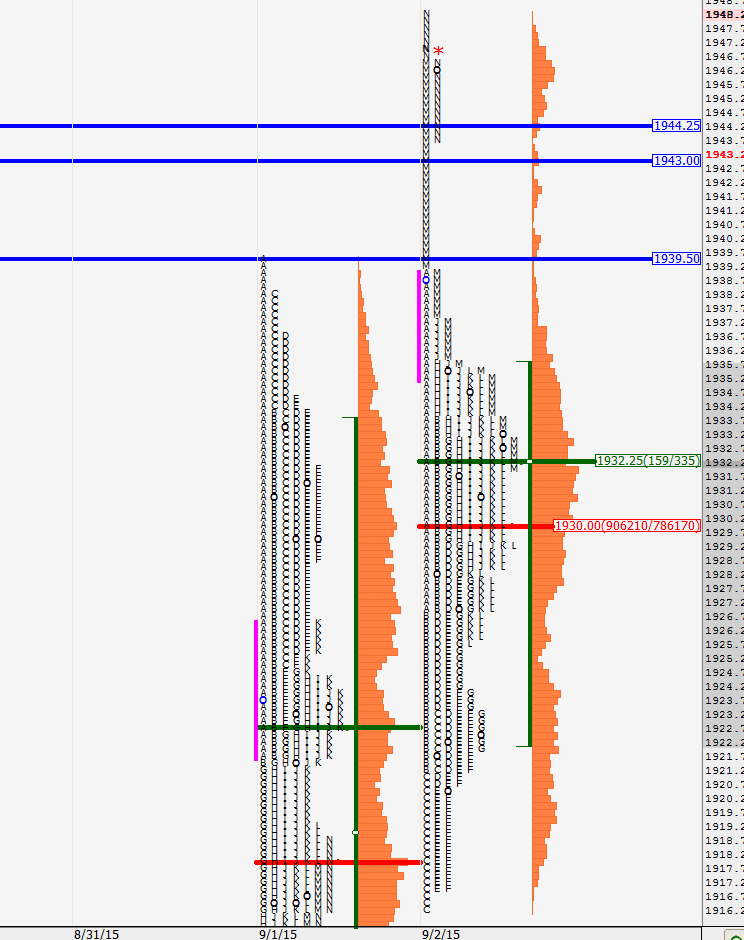 Looking at the split profile we can see the weak low formed with the E and F period lows. That coupled with the fact that they are only 3 ticks above the day's low gives me low confidence in that low holding up. But we shall see how that is carried forward. Sometimes it can take a while for those to be cleaned up. We can see how the day was largely a balancing day until the last 45 minutes where it seemed like there was some short covering and stop hunting going on. 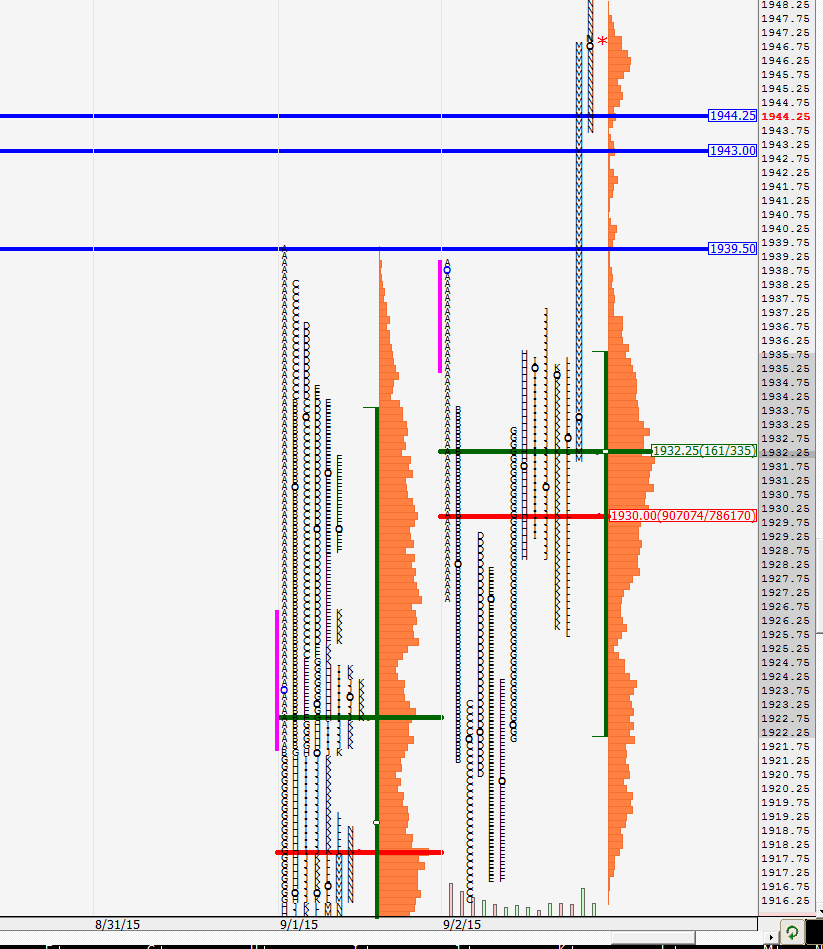 We shall see how the O/N action is in absence of the Chinese markets which are off for holidays the rest of the week. Jobless claims report tomorrow at 8:30 am could provide a catalyst so be aware of that. Good evening to all.
looks like the job report has kicked things into the next gear. keep in mind that we have a greenie/naked VPOC at 1969.5.
The O/N inventory is net long. if we were to open right here, we would be close to the low of 8/31. markets could drop at the open because of the unfilled gap but if they continue higher then that is a sign of strength as well. greenies are 1969.5, 1979 and 1995 to the upside. good luck to all.
The O/N action has 2 nice looking bells with a selling tail 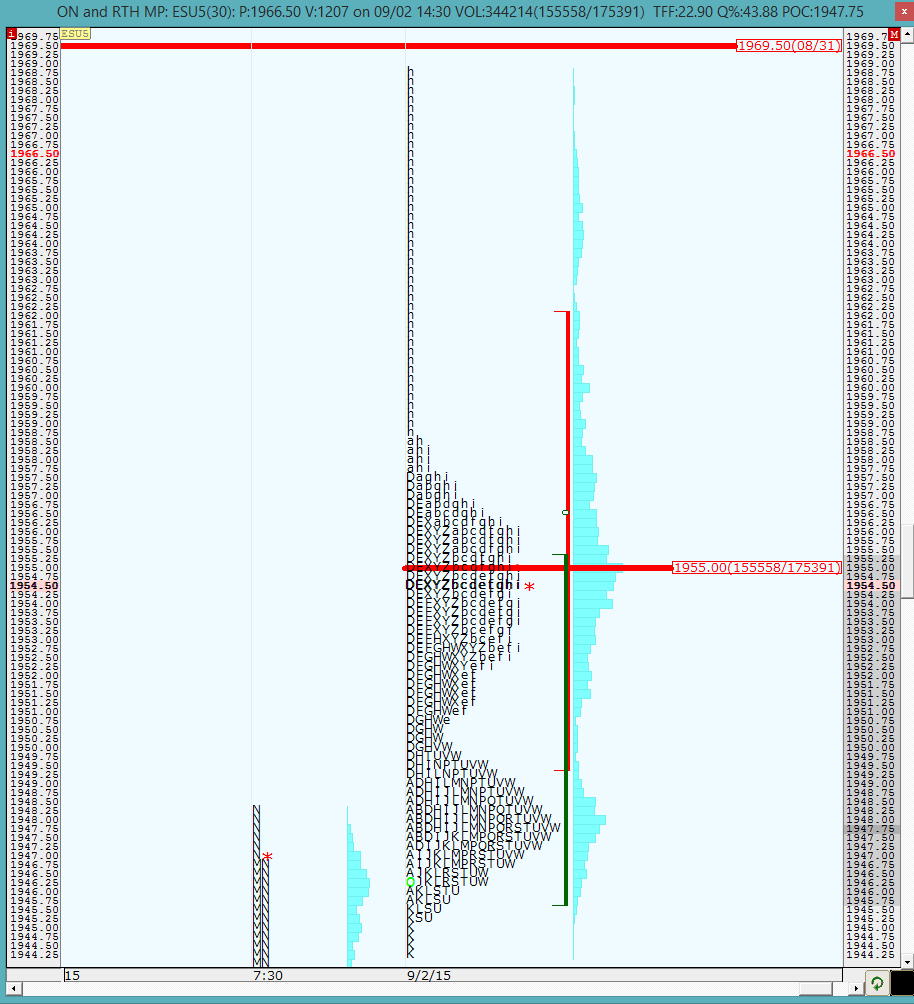 not much liquidation so far and we are spending time in this gap. this equals to a good sign for the buyers
gap closed to the tick but not completely. we still have from 1948.25 to 1951.5 unfilled. expect some retracement from here but lets see what happens and if we get into 8/31's range
also some unfilled single prints from 8/27 all the way to the left 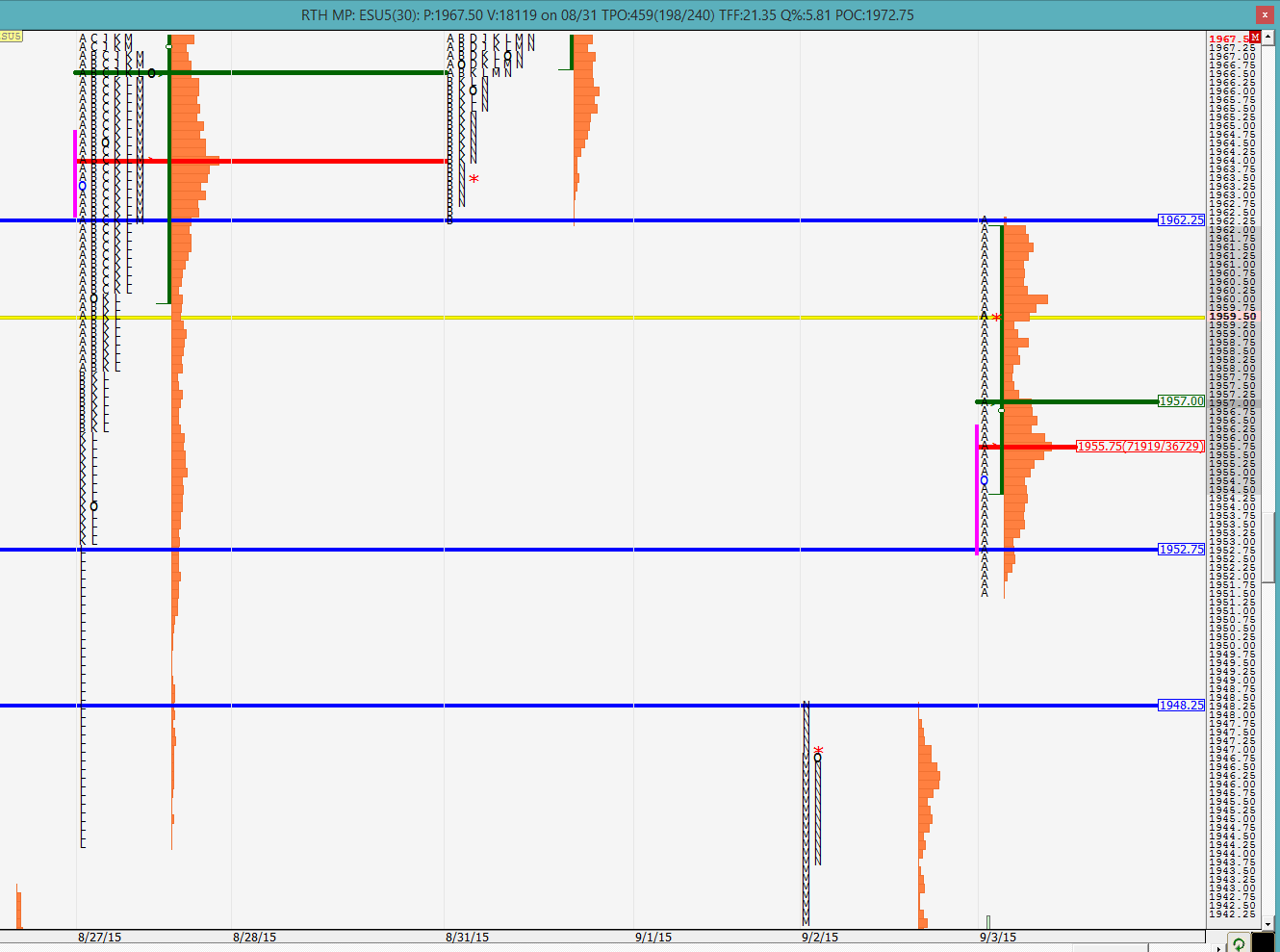 30 min VPOC at 1961.5. so far 8/31's range has been rejected but that was to be expected on the first try as well as with the range so far. now we shall see if we can take out the A period highs from here on out
rejection so far from 1961.5
heading towards 1969.5. so far we have not tried closing the gap to YD so the market is showing strength here
with the singles in the B period so far, i expect good resistance from the greenie. might have to front run it a bit
agree! scaled in 66-68.
kool!!! you are back! glad to see you again and hope to see you posting regularly again! welcome back
Emini Day Trading / Daily Notes / Forecast / Economic Events / Search / Terms and Conditions / Disclaimer / Books / Online Books / Site Map / Contact / Privacy Policy / Links / About / Day Trading Forum / Investment Calculators / Pivot Point Calculator / Market Profile Generator / Fibonacci Calculator / Mailing List / Advertise Here / Articles / Financial Terms / Brokers / Software / Holidays / Stock Split Calendar / Mortgage Calculator / Donate