We always get questions about this issue on roll-over days.
I received this question from someone:


quote:Guy, I am relatively new to trading the emini, so please excuse me if I ask a "dumb" question, but I am confused about what you mean by the following:

"If you are opening a new position in the ES before 09:30 that you plan to close during the day or perhaps before 09:30 you could use the near contract but you must remember that the spread will start widening as traders start switching out of this contract and you will struggle to get as favorable a price as you would with the next contract."

First of all there's no such thing as a dumb question - ask anything you want.

What it means is that as the volume in the contract starts to dry up, the spread will become wider and it will be more difficult to get a fill at a good price.

If you open a position 2 days before rollover and plan on closing it 2 days after rollover then there probably isn't much you can do about that and either contract (near or next) will suffice.

Would the March contract one day before expiration be less than the S&P Index value that same day, or just be more difficult to sell at 1220.00 due to lack of volume; so that instead of maybe a 1 or 2 ticks slippage someone might incur 2-3 ticks slippage? Or would the March contract be trading, due to lack of volume, 1 or 2 points below the June contract?

Your question here deals with relative value of the future versus the cash index. Basically the future will usually trade at a premium to the cash index and this premium will narrow as expiration approaches. This is due to a concept called the "cost of carry." The reason that the next contract will be trading above the near contract is because the near contract is soon to settle at the cash price and the next contract is trading at premium due to the "cost of carry." This has NOTHING to do with volume.

If any of that is unclear then just ask again...

Thank you for your very informative reply. I think I understand now the concept of fair value for the cash index vs. the near and next trading contracts. If I have it right that would explain why yesterday the June contract settled at 1214.00, whereas the March contract closed at 1209.50. The difference would represent the cash value.

So, if a trader waited until the very last moment before expiration to close his short position in the March contract, he would receive( less 2-4 ticks slippage) the cash value( more or less) of the underlying S&P index. Or if he were to still have his position on expiration Friday and the CME closed it out to cash settle the contract, he would receive the cash value of the Index.

Thank you for your very informative reply. I think I understand now the concept of fair value for the cash index vs. the near and next trading contracts. If I have it right that would explain why yesterday the June contract settled at 1214.00, whereas the March contract closed at 1209.50. The difference would represent the cash value.

Exactly. The March contract should be trading very close to cash now because it is about to settle - in a few trading days time. The June contract will trade at a premium to cash and that premium will diminish over time to zero when the contract settles in 3 months time.

quote:So, if a trader waited until the very last moment before expiration to close his short position in the March contract, he would receive( less 2-4 ticks slippage) the cash value( more or less) of the underlying S&P index. Or if he were to still have his position on expiration Friday and the CME closed it out to cash settle the contract, he would receive the cash value of the Index.


Correct on both counts.
When does volume switch from one contract to another? The chart below shows the volume for the March and June 2005 contracts for the E-mini S&P500 between 09:00 and 10:00 EST. The volume for the old contract (March) dominates in the first 15 minutes and then again just before the open at 09:30 EST. Otherwise you can see that the volume in the new contract (June) have taken over. (The chart shows the 5 minute average volume for each minute. e.g. The volume on the 09:17 bar shows the average volume per minute from 09:15 to 09:19 inclusive.) 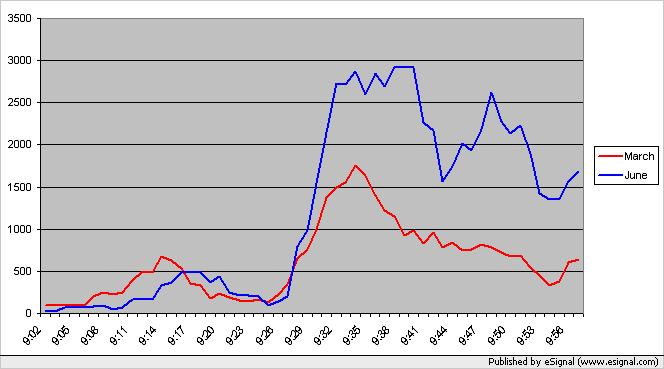 More information about rollover day can be found on this page: Rollover Days

The rule is the Thursday one week before the last trading day which is always a Friday.

MONDAY,JUNE 6 IS ROLL OVER DAY IN THE CURRENCY PITS---- JUNE to SEPTEMBER
Re: Last Trading Day for June Chicago Currencies, Cross Currencies and U.S.
Dollar Index from New York is 06-13-05
NOTE: BE CAREFUL NOT TO FORGET ABOUT YOUR POSITIONS.
Monday, June 13th at 9:15 A.M.(CST), is the Last Trading Day for June IMM Currencies on the IMM Exchange in Chicago and June US Dollar Index on the NYBOT in New York. These are Real Physical Deliveries.

Tips and Tricks for a successful Rollover Day.

- Change symbols on your charting platform to reflect the new contract month. We are moving from March to June so the H will change to an M. For example, the ES will change from something like "ES H6" to "ES M6"
- Change symbols on your trading platform. This is disastrous if you change your charting platform and forget your trading platform - I've done it - I know. TIP: If you think that your charting platform is leading or lagging your trading platform then you've probably forgotten to change one of the symbols.
- Be careful with continuous contracts. eSignal, for example, have a continuous contract denoted with #F. If you use this for charting (say) the ES then your symbol will be "ES #F". The great thing about this is that you don't need to change your symbol - it's automatically done for you tomorrow. However, if you have an indicator on your chart that relies on previous day's data (for example a pivot point indicator) then you will have the wrong figures being plotted on today's chart for that indicator.
- Make sure that the web sites that you get your reference data have updated their databases to reflect the changed contract. For example, the Daily Notes (and related) page on DeltaT1 uses the June contract from 2/27/06 forward in doing its calculations.
Daily Notes
- For more information on how Rollover Day works and to see how the volume shifts during the market opening on Rollover Day see this page:
Rollover Day
- My suggestion is to make the necessary changes that you need to make at the end of trading the day before rollover or get to your trading desk 15 to 30 minutes earlier on rollover day to make the changes. You don't want to be rushed and have the extra anxiety before trading opens.
This is rollover week.
Emini Day Trading / Daily Notes / Forecast / Economic Events / Search / Terms and Conditions / Disclaimer / Books / Online Books / Site Map / Contact / Privacy Policy / Links / About / Day Trading Forum / Investment Calculators / Pivot Point Calculator / Market Profile Generator / Fibonacci Calculator / Mailing List / Advertise Here / Articles / Financial Terms / Brokers / Software / Holidays / Stock Split Calendar / Mortgage Calculator / Donate