The market opened above the Wednesday's J bracket and traded down to it triggering a long at 1183.25. Draw down on this trade was 1 point to 1182.25 in the following bracket which was then followed by a best run-up of 14.75 points to the high of day of 1198 even.

The market dropped through that single later on in the day and hit the second single which triggered a long at 1180.50 which had a draw down of 4.25 points to the low of the day of 1176.25 and a best run up of 5.5 points to 1186 even. Using a 4 point stop and a target greater than 5.25 points would have made that trade a loser. Note however that the run-up of 5.5 points happened before that 4.25 point draw down so most traders would have trailed a stop to breakeven by then. 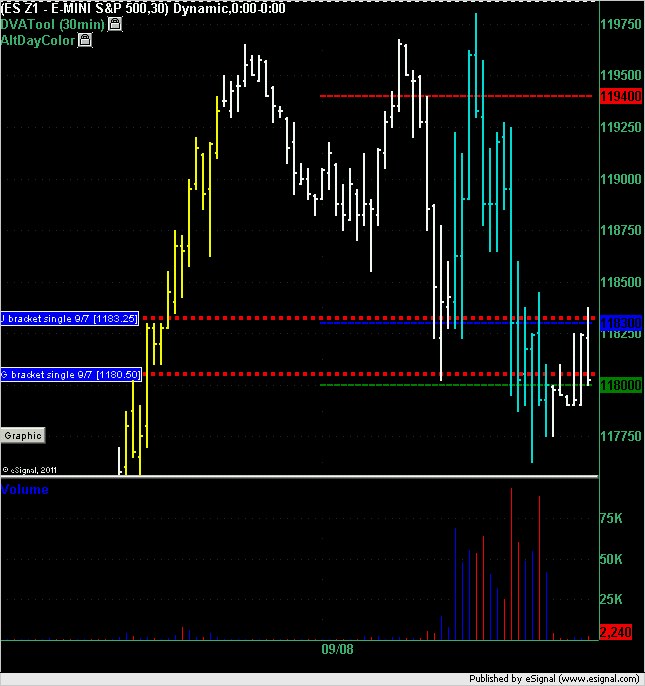 at least from a statistical view!!
just because we made new lows it doesn't change the probability for me and the 53.75...but I'll settle for 52.50....and will continue poking at longs down here
why do I have a feeling that nobody is really gettin me ??????? LOL!!


if you stay and play u may want to remember the concept of the neutral day
"just because we made new lows it doesn't change the probability for me and the 53.75...but I'll settle for 52.50....and will continue poking at longs down here.."

i dont have the power to hit u up..so this is why i post this to say thank you.and i again would like to thank everyone that does post..now i will go back to lurking..

have good weekend all

Markets spend almost the same amount of time "trying" to go ups as they do going down.
The last post is the wrong chart. Thin that was Thursdays chart.

Joe...
fantastic post, very interesting concept to add to a strategy... I haven't done any back study yet... is there a # out of balance that you have found to be outer edge of "out of balance"? once again thanks for the post and the charts
chris
Just trading price action (correctly) is all anyone has to do to make a good living. The concept is bulls and bears only have so many opportunities to push the market in there direction are they doing a good job or wasting there HH's on a one tick