ON vpoc and POC is currently at O/N midpoint ...a strong magnet if it holds there before RTH opens

No video below? Try this link: thursday.swf

covered last at 36.50... not gonna let them torture me a gap in the data trade and we should really be in September anyway now
out at 2 points as well, Nice surfing with you Bruce
congrats sharks...i was also figuring they's want to test that S2 area again at 35.75...so we had some nice confluence with the lower edge of the bell curve from last thursday
I think every bear wants to keep this under 30.50 in order to make the lower lows down to the 1922-25 area today...of course that is just a projection and doesn't make us money but there are singles there and the center of thursdays bell curve...as per ZEP tember contract
and while I'm on ZEP tember ...here is a current blurb from Rolling stone magazine

"THAT'S LED ZEPPELIN LED ZEPPELIN LED ZEPPELIN TO YOU: Moving past the depressing chart news of the week — the Frozen soundtrack has inexplicably surged to Number Two, selling 52,000 copies, while Coldplay's new Ghost Stories fell from Number One to Number Five, with just 46,000 sales — Led Zeppelin is back. In the same year that Colorado and Washington enacted legal marijuana laws, which I believe is no coincidence, newly expanded Led Zeppelin, Led Zeppelin II and Led Zeppelin III have hit Number Seven, Number Nine and Number 10, respectively. I'm usually dubious when classic bands cash in by reissuing old albums for the umpteenth time (I've owned them in three different formats), but these packages are pretty stellar.

Read more: http://www.rollingstone.com/music/news/on-the-charts-miranda-lambert-continues-superstar-run-20140611#ixzz34RELyVX0
Follow us: @rollingstone on Twitter | RollingStone on Facebook"
There was a single up at 37.75 I believe that should have been our target I guess.
Bruce. Really appreciate your commentary helping me through this. Every morning I plot my own levels and give myself a high five when they are close to yours. I do the same on NQ and for some reason mostly trade that, but your ES analysis helps. Only 2 points as well on ES today but 14 points on NQ overall. Thanks for your help.
Back up to the 6/5 VPOC will this hold back Prices???
it almost feels like these are the "patient buyers" in the market as per Daltons phrasing......Buzzy Scwartz use to say that in an uptrend after three days of lower lows he would be looking to be a buyer...my range projection has this weeks lows coming in at the 17 - 22 area as per September....fun stuff but does it make me money ...? NO !! ..so far it looks like a struggle to go lower but this is way out of the first 90 minute for me and I have no clue...

thanks for the positive feed back..here and in email and I want to thank all those who are taking the time to post their market thoughts.....The more the merrier !

I hope it goes YOUR WAY ( yes that means you) if you are playing in here
When are traders rolling over to the September Contract? Traditionally it would have been this morning at 9:30am EST but the date has become fuzzy recently...
working that bell curve down to 03-99,need to see if it holds bottom of mid at 19 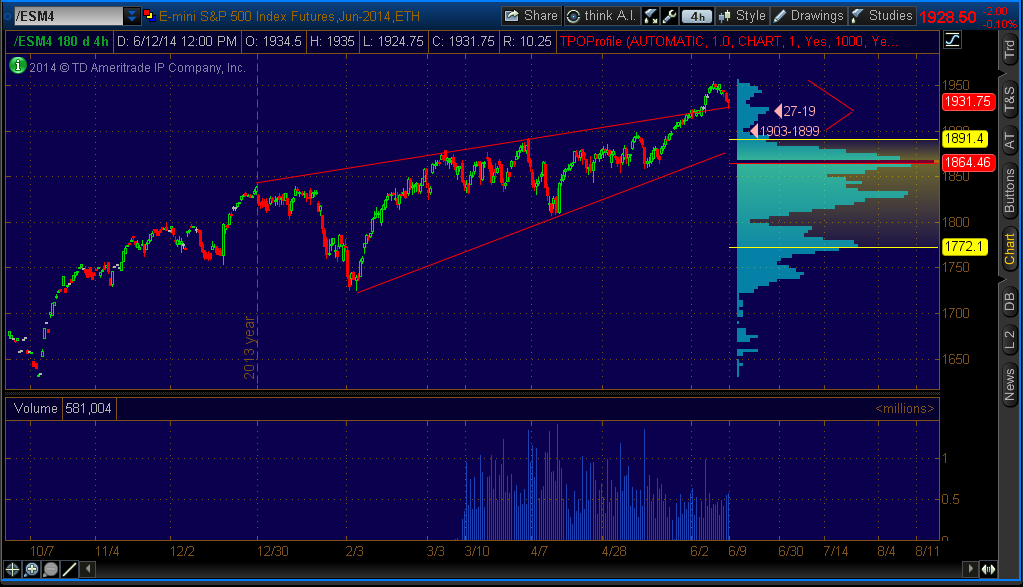