What a day love it when it moves like this :)
new kid, ill answer that question about my bar grading this weekend. Been busy since last night euro currency crash and dealing with this knife all day. but im not ignoring you.
look at all the wicks on the lower end of the 15min NQ charts

new kid, ill answer that question about my bar grading this weekend. Been busy since last night euro currency crash and dealing with this knife all day. but im not ignoring you.

well, so the analysis i wrote last night played out very nicely today. although i did not take the trade, i feel pretty good about my thought process and theorizing. now next time, i have to put my money where my mouth is
nice one newkid,
Your top down analysis was good. When mention a close below a level, I'm not clear on what you mean.
What seems to be missing from the analysis IMO and only trying to help- is a trigger to enter. I was no longer available to trade as the market broke down but the "story" for me was an open below a prior swing low, bumped up against it a few times and couldn't get above. That was the clue to be short, but where to enter? IMO it was when price broke below the open and it turned out to be a heat free drop to the levels you had already correctly mapped out. This is what I mean when I say I've become a trend trader, the trend was definitely down (30M) and I try to ride the down -in this case- draft.

Good luck to all, it seems everybody made a chunk on this day.

new kid, ill answer that question about my bar grading this weekend. Been busy since last night euro currency crash and dealing with this knife all day. but im not ignoring you.

Mike, that is a fair question. See the picture below for reference. 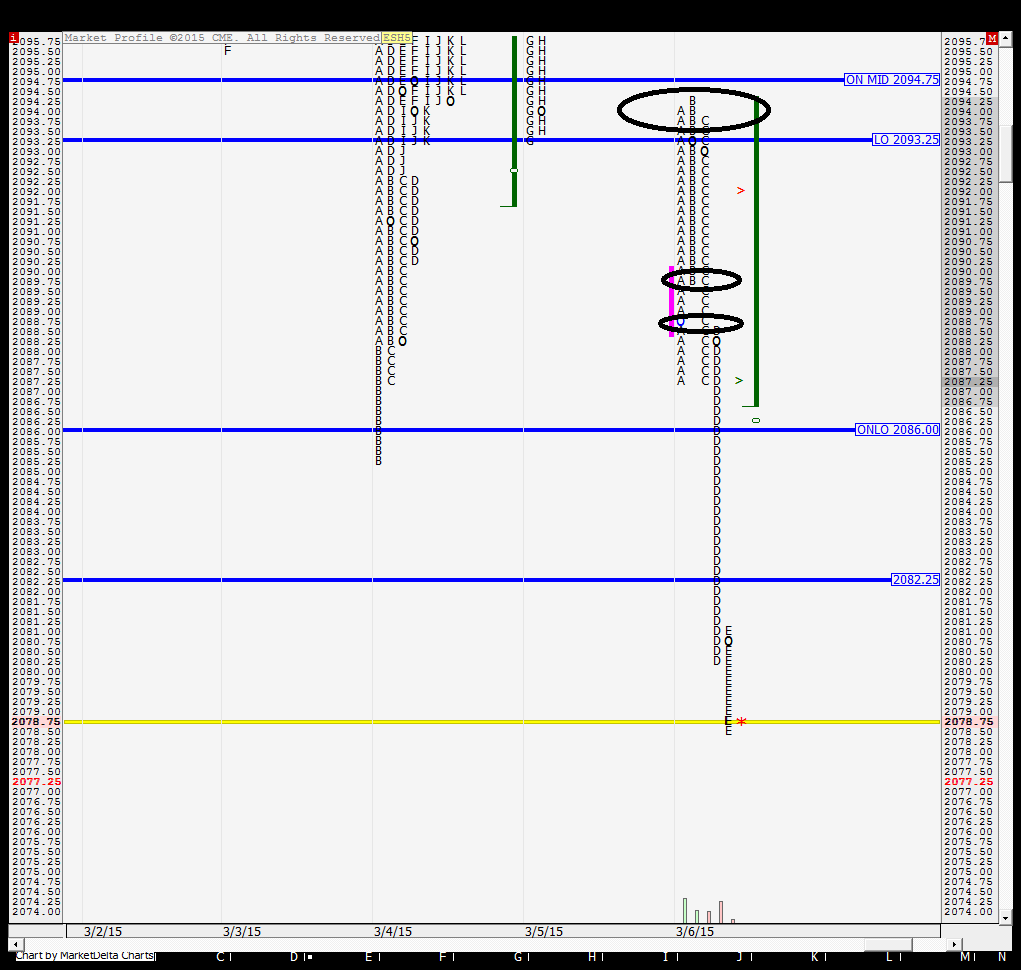 There were a few thoughts going through my mind as the day developed. As you know, I was focused on whether the market could get back into Thursday's range or not. So I did not take the long trade that you, Bruce and I am sure others took because I was skeptical of the move and figured there was a good chance the market could tank. The market in fact did move up towards Thursday's range and this was my first clue. It was not weak enough to tank right away and there were not enough sellers to start selling right away and the buyers were in control.

As we entered Thursday's range and did not get much traction to the upside, I sold right there figuring now the sellers might come in. As you know from my posts, I was shaken out for a small profit, instead of the move down to the open. This happened in the "B" period.

Now the C period comes along and the buyers are still trying to get into Thursday's range and the sellers are still no-where to be seen. By now, the market had tried numerous times (maybe 5 or 6, not exactly sure) to move into Thursday's range but there was simply no traction. It was just stalling. Now the C period came up, and could not even take out the B period high, which was a mere 4 tics into Thursday's range. This was an aha moment for me. I knew that if they could even manage that, things were about to get ugly. This was clue #2 and the aggressive seller would have entered when we came out of Thursday's range around 2093. The reason was that now the sellers were definitely going to be interested because more than an hour had passed since the open and the buyers were getting nowhere. The sharks smelled the blood in the water and began circling. All those buyers that bought thinking of a move to 2100, would have stops below the low of the day so far, which was the A period low of 2087.25. Below that there would be stops under Wednesday's low of 85.25 and then the 82.25 number would have stops. I had a greenie at 77.5 and 73.5 and those would have been my exit points because I knew the stop running would take the market to those levels and possibly more.

Thoughts?
All good. For me, the open is a significant level. Many bigger players have a simple saying- long above the open, short below the open- and I try to hop on with them when possible.